Word play turned into military actions in the Gulf of Taiwan

There is no doubt that the echoes of the visit of US House Speaker, Nancy Pelosi, to Taiwan, early last August, will continue for some time, as an interactive dynamic unfolds between Beijing, Washington and Taipei, and each party has its own interpretation of what is happening, and what it was forced to do in response. Beijing embarked on 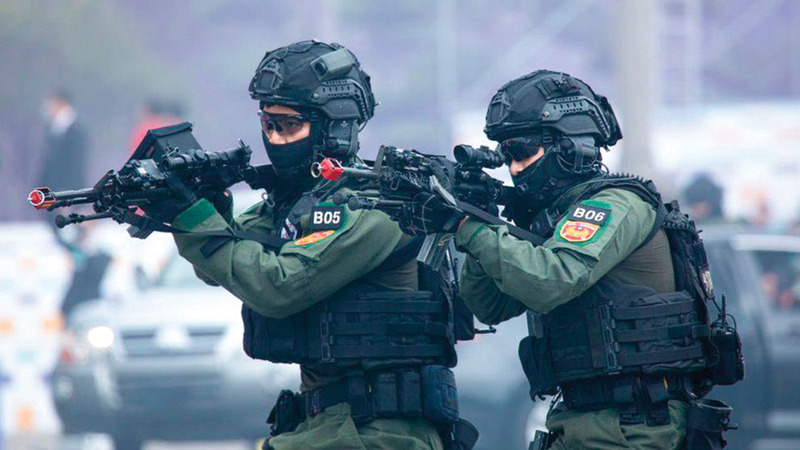 An American writer monitors the changing positions of all parties

Word play turned into military actions in the Gulf of Taiwan

There is no doubt that the echoes of the visit of US House Speaker, Nancy Pelosi, to Taiwan, early last August, will continue for some time, as an interactive dynamic unfolds between Beijing, Washington and Taipei, and each party has its own interpretation of what is happening, and what it had to do in response.

Following the visit, Beijing launched an unprecedented series of military exercises around the island, and confirmed that Washington and Taipei had violated its own red line by violating previous understandings of the "one China" framework.

Senior fellow writer at the National Interest Center, and non-resident fellow at the Chicago Council on Global Affairs, Paul Hare, says in a report published by the American magazine "National Interest", that Washington saw in China's moves an unjustified and destabilizing reaction, and pledged to maintain its position. military force in the Taiwan Strait, to deter Beijing from any actual use of force.

Taipei announced that it would increase defense spending to bolster preparations for a possible Chinese attack.

Hare, a former national intelligence official for East Asia (2007-2015), sees this all reflecting, and even reinforcing, the three parties' tendency to see the stalemate in the strait as a military problem, making it more difficult than it already was to pursue a diplomatic path to de-escalation.

However, preoccupation with military exercises in the Gulf of Taiwan diverts attention from the complex wordplay by the three sides;

To justify its positions and actions.

The prevailing narrative now, says Hare, is that Beijing has created a "new status quo", or "new normal," by arranging an enhanced military posture around the island.

However, this overlooks, or obscures, the changes that occurred to the status quo, which Washington and Taipei are said to have made.

Chinese policy specialists often recall that in 2004 then-Assistant Secretary of State James Kelly asserted in Congressional testimony that America does not support "unilateral actions (on Taiwan) that would change the status quo, as we define it," Hare says.

But Kelly did not specify the "status quo," nor did any of the US officials do it recently, and they affirm Washington's opposition to any "unilateral changes to the current situation."

In any case, it is clear that the current "status quo" is that the Speaker of the House of Representatives can visit Taiwan as a routine matter consistent with the "one-China policy", despite reports that the Biden administration did not favor Pelosi's visit and did not want it to happen.

Taipei has also refrained from defining the "status quo", but it has been reported that under President Tsai Ing-wen's rule, it has gradually retreated from the "one China" framework.

For its part, Beijing mainly defines the "status quo" from the perspective of the "one China principle", the existence of one China, of which Taiwan is a part, and Beijing is the only legitimate government and its international representative.

From this, Hare concludes that the main element is that it makes no sense to talk about the "status quo" in the Taiwan Strait without acknowledging the lack of mutual agreement between the parties concerned about its definition or characterization.

In addition, the "status quo" in the strait has never been static.

Most of the comments in recent weeks have criticized Beijing's continued claim that America has long adhered to the "one-China principle", even though Washington only "recognizes" the phrase "Taiwan is part of China", without accepting or endorsing it, including that America considered Taiwan a part From China until the outbreak of the Korean War in 1950. Washington later adopted a position that considers Taiwan's legal status to be "undefined", a position that has been much discussed and sometimes violated by US officials in their speeches.

Moreover, Beijing sees a "empty" of the "one-China policy" adopted by Washington, precisely after he declared that Pelosi's visit does not represent a violation or change of this policy.

And if the Biden administration can adopt a position that Pelosi's visit is acceptable in light of US policy - despite its opposition to it - how can Beijing know the limits of these actions?

In addition, the manipulation of words also includes assertions by US officials that Beijing overreacted to Pelosi's visit to Taiwan, and used it as a "pretext" to implement pre-planned plans to conduct unprecedented military exercises in the region surrounding Taiwan.

Hare says that Beijing will gain little from the rattling of swords around Taiwan, especially in light of the risks faced by Chinese President Xi Jinping from igniting an international crisis weeks before he seeks to win a third term and dominate the agenda of the twentieth General Conference of the Communist Party of China, scheduled for mid October.

There was also a discussion related to semantics, about whether Pelosi's visit sparked a new "crisis" in the Taiwan Strait.

But some political scientists do not seem to want to classify it as a crisis, based on an assessment that there is little chance of an actual military conflict.

Presumably, the Biden administration does not want to describe the situation as a crisis, since showing an alert that would lead to a reconsideration of America's policies is what Beijing is seeking.

It is difficult to deny that the consequences of Pelosi's visit to Taiwan resulted in a hardening of the positions of all parties, an escalation of tension between America and China, and an exchange of accusations that seems to escalate, especially if these parties continue to focus on expressing military reactions to the situation.

Taiwan remains captive to a historical trap woven by Washington and Beijing more than four decades ago, which is represented in the three statements, a set of three joint statements between the governments of America and China, which played a crucial role in the normalization of relations between the two countries, and remains an essential element in the dialogue between them.

This is unfair and unfortunate for the people of Taiwan, but these are the conditions that must be faced rather than denied or avoided.

In concluding the analysis, the writer Hare says that Pelosi's visit to the island revealed the hidden impasse in US policy towards Taiwan, and put it in the foreground in a disturbing way.

• Taiwan remains a prisoner of a historical trap woven by Washington and Beijing more than four decades ago, which is represented in the three statements, which are a set of three joint statements between the governments of America and China, which played a crucial role in normalizing relations between the two countries, and remain an essential element in the dialogue between them.

• It makes no sense to talk about the “status quo” in the Taiwan Strait, without recognizing that there is no mutual agreement between the parties concerned about its definition or description.