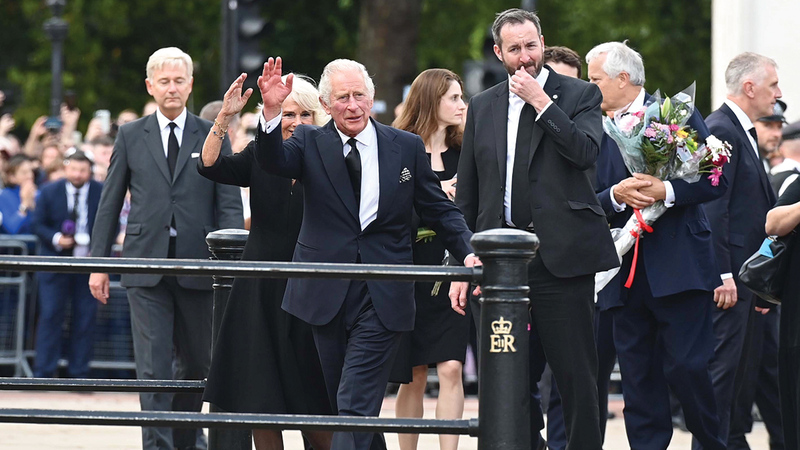 His Highness Sheikh Mohamed bin Zayed Al Nahyan, President of the State, sent a cable of condolences to His Majesty King Charles III of the United Kingdom of Great Britain and Northern Ireland on the death of Queen Elizabeth II.

His Highness Sheikh Mohammed bin Rashid Al Maktoum, Vice President and Prime Minister of the UAE and Ruler of Dubai, also sent a similar cable of condolences to His Majesty King Charles III of the United Kingdom of Great Britain and Northern Ireland on the death of Queen Elizabeth II.

"I pledge that I will respect the country and the Constitution," King Charles said in his first televised address as king. "I renew before you this commitment to serve throughout my life," describing Elizabeth II as an "inspiration and example" to him and his family.

He added: "I am proud of Britain's prosperity and our values ​​will remain.

In 70 years our society has become multicultural and multi-religious,” and that he will carry the reign of Queen Elizabeth with him.

King Charles III confirmed that as heir to the crown he understood his responsibilities, and that Prince William would shoulder the responsibilities he had performed for five decades, then gave his eldest son William and his wife Kate the title of Prince and Princess of Wales.

Britain's new monarch, Charles, expressed his love for Prince Harry and his wife Meghan, who are his son and daughter-in-law, in a meaningful reference to the couple, who have a strained relationship with the rest of the family.

"I also want to express my love for Harry and Meghan as they continue their lives abroad," Charles said in a televised address.

Charles had rushed to be with the Queen before her death in her Scottish residence, the day before yesterday, and returned to London with his wife Camilla.

Britain's new monarch shook hands with members of the public outside Buckingham Palace yesterday, after getting out of his car.

Television footage showed Charles and his wife Camilla getting off the royal car to cheers from a crowd gathered outside the palace.

Then the king proceeded to shake hands with dozens and look at the flowers that people put in front of the palace in honor of his mother for at least 10 minutes.

Several members of the audience sang "God save the King" and one of them said, "We love you, Charles!"

Condolences poured in from around the world after the death of Queen Elizabeth, the longest-reigning British monarch, who enjoyed a prominent presence on the world stage for seven decades.

The British, who first woke up to a morning without the woman her grandson Harry once described as "the grandmother of the country", gathered in front of Buckingham Palace and Windsor Castle to lay flowers and take pictures.

A period of national mourning begins in the United Kingdom until the Queen's funeral.

Buckingham Palace also announced a seven-day period of "royal" mourning, beginning with the Queen's funeral, which has not yet been determined, but is expected to take place within 10 days.

And the "royal mourning", which is different from the national mourning that began yesterday, is committed by members of the royal family and employees of the monarchy, as well as the guards participating in the ceremonies.

With the start of national mourning, sporting and cultural events were canceled while supermarkets decided to keep their doors closed and railway and postal workers suspended their planned strikes in the face of the cost of living crisis.

Pictures of Elizabeth II, smiling and in all stages of her life, were published on the front pages of British newspapers on Friday, indicating the void left by her departure after a rule that lasted 70 years and seven months.

"Sadness is the price we pay for love," the Daily Telegraph wrote on its front page, as Elizabeth II told the American people after the September 11, 2001 attacks in New York.

The Sun newspaper headlined "Goodnight, Madam", while the Daily Mail wrote, "Our hearts are broken."

Other newspapers published a picture of the Queen at her coronation, stamped on the dates 1926-2022.

The government said it expected large crowds at the royal palaces.

"We expect significant congestion and delays in some public transport," it said in a statement.

Queen Elizabeth was the head of state in the United Kingdom and 14 other countries and territories including Australia, Canada, Jamaica, New Zealand and Papua New Guinea.

Charles, 73, who automatically inherited the throne, said the death was a moment of great sadness for him and his family.

"We are deeply saddened by the death of a dear queen and a beloved mother.

I know that her absence will have a profound impact throughout the country, regions and Commonwealth of Nations, and on an enormous number of people all over the world.”

Artillery fires in honor of the late Queen will sound in Hyde Park and at the Tower of London, as will the bells of Westminster Abbey and St Paul's.

At Windsor Castle, the Sebastopol bell, captured during the 19th century Crimean War, will ring only to announce the king's death.

The honoring ceremonies also began at the other end of the world, in Australia and New Zealand, two of the Commonwealth countries of which Charles III became president.

Parliament is witnessing a special session of deputies to honor the queen and is scheduled to meet on Saturday as well, which is rare, to approve a letter of condolence to the king.

Thereafter, the Council of Succession shall formally proclaim Charles III King at a meeting this Saturday morning at St James's Palace in London, to be read an hour later from the palace balcony and then in all the counties of the United Kingdom the following day.