“Several times”: the IAEA spoke about the violation of the physical integrity of the Zaporozhye NPP

IAEA Director General Rafael Grossi announced the repeated violation of the physical integrity of the Zaporozhye NPP. He noted that the agency's mission cannot yet conclude whether this was done by accident or intentionally. It is planned that six technical experts will remain at the station and will continue to work until 4 or 5 September. In the future, two representatives of the organization will remain at ZNPP on a permanent basis. Russia has repeatedly pointed out that the Zaporizhzhya Nuclear Power Plant is under fire from the Ukrainian military. In this regard, the day before, the Russian permanent mission requested a meeting of the UN Security Council for September 6. 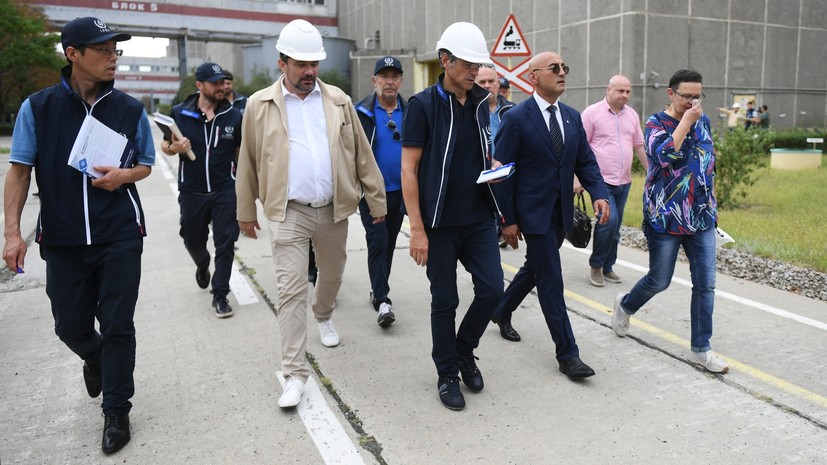 The physical integrity of the Zaporizhzhya NPP has been violated several times, but the mission still "does not have the necessary elements to make an assessment, by accident or by design," said IAEA director general Rafael Grossi.

The video of his speech was published by the Ukrainian media, TASS reports.

According to him, the situation around the ZNPP will cause concern "until it becomes more stable and predictable."

He also indicated that the technical experts of the International Nuclear Energy Agency will work at the station until September 4 or 5: “They must formulate the first questions, the first data, give a preliminary assessment, and then they will prepare a report.

On the eve of Grossi, after the initial assessment, he said that the IAEA delegation had collected “a lot of information”, and he himself saw “key things”.

The permanent representative of the Russian Federation to international organizations in Vienna, Mikhail Ulyanov, confirmed these statements.

He pointed out that in the coming days, six IAEA employees specializing in nuclear safety assurances would be at the Zaporizhzhya NPP, and two people would subsequently remain on a permanent basis.

“We welcome this, since the international presence is called upon to dispel numerous speculations regarding the state of affairs at the ZNPP,” RIA Novosti quoted Ulyanov as saying.

They face purely technical tasks, they cannot, due to their status, draw conclusions of a political nature, but must assess the state of affairs in the field of nuclear safety and conduct an inventory of the nuclear material located at the station.”

Earlier, the chairman of the movement “We are together with Russia”, a member of the main council of the administration of the Zaporozhye region, Vladimir Rogov, told how the visit of the IAEA mission to the ZNPP went.

Members of the IAEA mission got access to everything they wanted.

They visited the roof of special building No. 1, where NATO shells flew in, one of which broke through the roof, they talked with the staff, ”RIA Novosti quotes him.

At the same time, Rogov, on the air of the Komsomolskaya Pravda radio station, said that during the visit of the IAEA mission, ZAES employees told the agency's director general Rafael Grossi what was happening at the nuclear facility and where the shells were fired from.

Also on russian.rt.com “According to the classic terrorist scheme”: how Kyiv tried to disrupt the work of the IAEA mission at the Zaporozhye NPP

He stressed that Ukrainian spies and saboteurs tried to enter the ZNPP territory under the guise of journalists, but were not allowed.

According to him, currently "the situation at the nuclear power plant is calm."

The Russian side expects that Grossi, as well as UN Secretary General António Guterres, will speak at a meeting of the UN Security Council, which the Russian Federation requested for September 6 "in light of the ongoing Ukrainian shelling of the ZNPP", as well as "the reckless provocation of the Kyiv regime aimed at disrupting a visit to the station IAEA inspectors.

On September 1, Energodar and the Zaporozhye NPP came under fire from the Armed Forces of Ukraine.

In addition, the Kyiv regime attempted to seize a nuclear power plant, which was prevented by units of the National Guard and the RF Armed Forces.

“Obviously, if the Kyiv regime’s operation to seize the station was successful, the head of the IAEA, Rafael Grossi, and the mission’s experts would become a human shield for Ukrainian saboteurs to prevent any actions to destroy them by units of the Russian Armed Forces,” the Russian Defense Ministry said.

In turn, the official representative of the UN Secretary General, Stephane Dujarric, said that the organization is glad that Russia has done everything necessary to protect the IAEA inspectors.