“Kyiv will be disappointed”: how the visit of the IAEA mission can affect the situation around the Zaporizhzhya NPP

Moscow expects that the conclusions of the mission of the International Atomic Energy Agency (IAEA) regarding the situation at the Zaporozhye Nuclear Power Plant (ZNPP) will be objective and devoid of political overtones. This was stated by the official representative of the Russian Foreign Ministry Maria Zakharova. According to her, experts in assessing the situation should proceed from professional skills and competencies. According to IAEA Director General Rafael Grossi, the delegation will arrive at the site within a week. Meanwhile, Kyiv has already expressed the wish that the agency's specialists recognize the violation of nuclear protocols by the Russian Federation. Experts believe that the presence of unbiased observers at the ZNPP is unprofitable for the Ukrainian authorities, as this will destroy the image of Russia as an aggressor they are constructing. 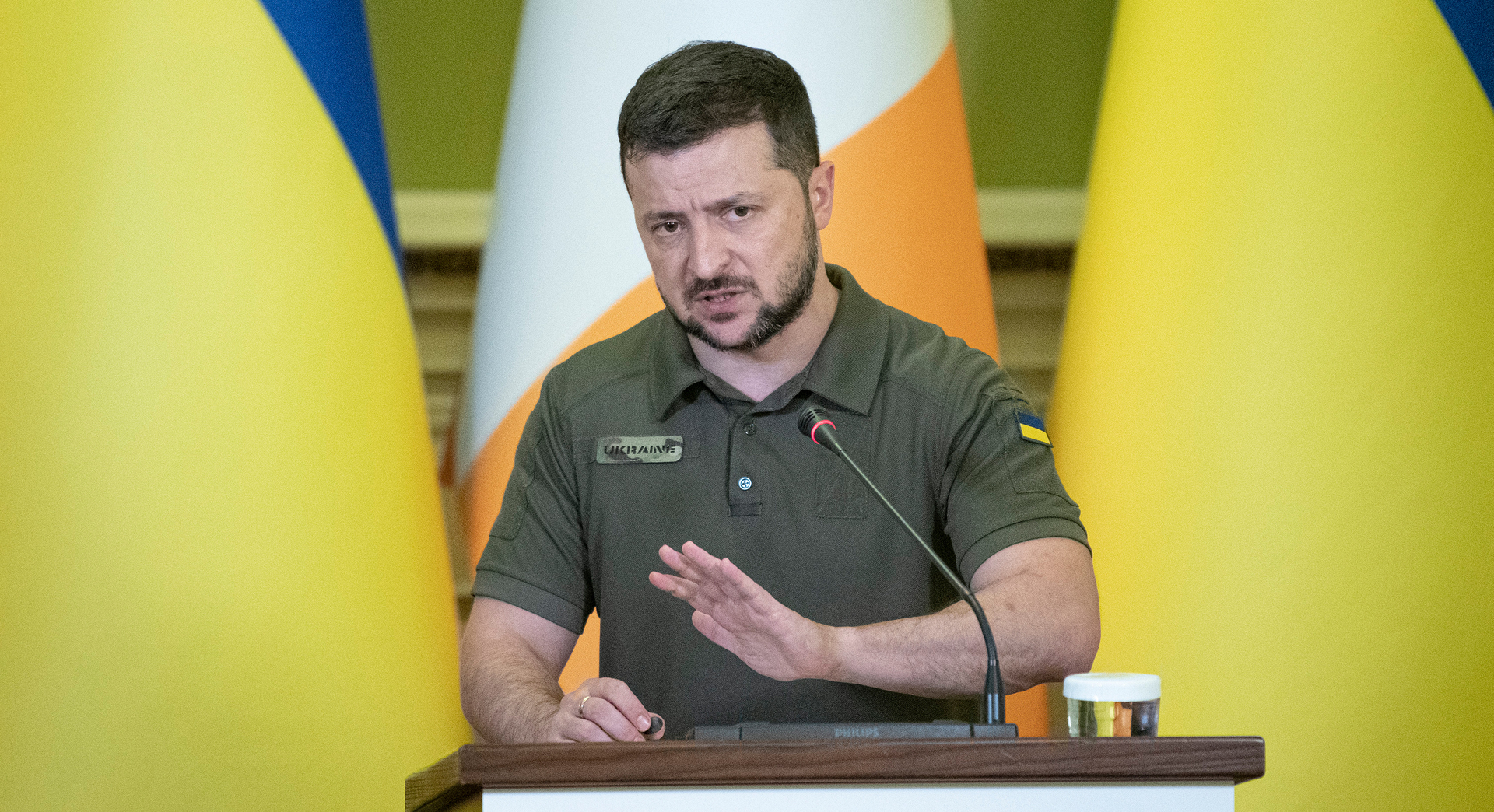 Moscow expects that the mission of the International Atomic Energy Agency (IAEA) will be guided by the principle of objectivity in assessing the situation at the Zaporozhye Nuclear Power Plant (ZAES) and will draw conclusions “devoid of political overtones”.

This statement was made by the official representative of the Russian Foreign Ministry Maria Zakharova.

“The conclusions of the work of this mission should not be predicted by someone, they should not have political overtones.

They must be objective," Zakharova said on the air of the Russia 24 TV channel.

The diplomat stressed that experts should assess the situation based on their professional skills and competencies.

Zakharova warned that the West has recently been trying to seize the initiative on the issue of the delegation's visit and distort the situation around it.

“We hear from Western countries absolutely inadequate assessments of what is happening that do not correspond to reality.

This is an absolute lie, this is a twist on its head, ”she said.

Thus, on August 29, the group of directors for the nonproliferation of nuclear weapons of the G7 countries welcomed only the actions of IAEA Director General Rafael Grossi and the efforts of UN Secretary General António Guterres, without saying that the visit was initiated and mainly worked out by Moscow.

Help on the way

The IAEA delegation is to arrive at the Zaporozhye NPP before the end of this week.

This was announced by the CEO of the agency Rafael Grossi in his Twitter.

“This day has come: the IAEA mission to support and assist Zaporozhye is already on its way.

We must ensure the nuclear and physical security of the largest nuclear facility in Ukraine and Europe.

I am proud to be leading this mission, which will arrive at ZNPP later this week,” Grossi said.

The day has come, @IAEAorg's Support and Assistance Mission to #Zaporizhzhya (ISAMZ) is now on its way.

We must protect the safety and security of #Ukraine's and Europe's biggest nuclear facility.

Proud to lead this mission which will be in #ZNPP later this week.

The delegation consists of about a dozen specialists dealing with the issues of safeguards and nuclear safety, said Mikhail Ulyanov, permanent representative of the Russian Federation to international organizations in Vienna, in a commentary to RIA Novosti.

According to him, the experts are also accompanied by a large team of UN staff responsible for logistics and security issues.

The diplomat stressed that the IAEA mission's visit to the plant "will dispel numerous speculations" about the unfavorable state of affairs at the ZNPP.

“As we understand it, the general director intends to keep several people at the station on a permanent basis,” Ulyanov said.

According to The New York Times, which reviewed the list of the mission, among the delegates, in addition to the head of the agency, Rafael Grossi, there will be experts from such countries as Lithuania, Poland, Serbia, China, France, Italy, Albania, Jordan, Mexico and North Macedonia.

American and British specialists are not announced.

Earlier, Rafael Grossi himself spoke about the possibility of establishing a permanent mission at the Zaporozhye NPP in an interview with the French radio station RFI.

“We need to clearly establish the parameters of the mission and ultimately ensure the constant presence of agency employees at the facility,” he said.

At the same time, the IAEA Director General noted that in the process of organizing the visit, some difficulties arose with coordinating the mission's route, since this had to be done "in coordination with both countries, which is difficult in the current circumstances."

Thus, the Russian side doubted that Ukraine would be able to guarantee the safety of the IAEA staff.

As Igor Vishnevetsky, Deputy Director of the Department for Non-Proliferation and Arms Control of the Russian Foreign Ministry, explained to journalists on August 16, for this mission they will have to cross the front line, where Ukrainian armed formations can behave unpredictably.

However, Kyiv categorically stated that the delegation should arrive at the facility only from the territory under its control.

Otherwise, the experts will no longer be allowed into the country.

“We know that there were, let’s say, proposals for IAEA representatives to travel from the occupied Crimea.

We said: if this happens, then the IAEA will not come to us again in accordance with our legislation,” President of Ukraine Volodymyr Zelensky emphasized, speaking at a press conference following the Crimean Platform summit on August 23.

The Kremlin welcomed the departure of the delegation in the direction of the Zaporizhzhya NPP, emphasizing that Russia is interested in the inspection.

“We have been waiting for this mission for a long time, we consider it necessary,” said Dmitry Peskov, press secretary of the President of the Russian Federation, in a comment to reporters.

He also called on the international community to put pressure on the Ukrainian side to stop shelling the ZNPP and adjacent territories.

According to him, Russia, for its part, will provide all the necessary security for the experts, taking into account the risks associated with the ongoing Ukrainian shelling.

At the same time, the press secretary confirmed that the IAEA mission would arrive from the territory controlled by Kyiv.

In turn, in Kyiv, on the eve of the visit, the delegations are already beginning to put forward demands on her.

Thus, the head of the Ukrainian Foreign Ministry, Dmitry Kuleba, at a press conference in Stockholm on August 29, stressed that experts in Kyiv are waiting for specific conclusions.

“We expect from the mission a clear statement of the facts of violation of all nuclear safety protocols,” he said.

He also accused Russia of trying to legitimize its presence at the Zaporozhye nuclear power plant.

Meanwhile, the authorities of the Zaporozhye region expressed the opinion that Kyiv might try to create obstacles for the IAEA delegation to visit the Zaporozhye NPP.

“I think the Kyiv regime will do everything, find any excuse to prevent the IAEA representatives from coming.

This visit is unprofitable for Ukraine - there will be nothing to speculate with," said the head of the administration of the Zaporozhye region, Yevgeny Balitsky, in an interview with RIA Novosti.

The politician specified that the authorities of the region, for their part, are ready to provide the mission with any assistance, providing it with complete security and access to the station, so that experts can assess the real situation and from which side the object is being shelled.

“The main question is whether Ukraine is ready to ensure silence during the mission’s stay,” Balitsky said.

It is noteworthy that, despite reports that the IAEA mission has already headed towards the ZNPP, the Ukrainian authorities do not stop shelling the station.

So, the Russian Defense Ministry announced on August 29 that two shells fired by Ukrainian artillery exploded in the immediate vicinity of the perimeter of the nuclear power plant.

In addition, the military-civilian administration (MCA) of the city of Energodar, on whose territory the ZNPP is located, reported that the Ukrainian military was shelling close to the power units of the station, and one of the shells hit the roof of the special building.

Also, Vladimir Rogov, a member of the main council of the military-civilian administration of the Zaporozhye region, said that as a result of shelling from the side of the Armed Forces of Ukraine, the roof of the special building of the Zaporizhzhya nuclear power plant was pierced, where fresh fuel for reactors is stored.

"It's about to become obvious"

Experts interviewed by RT agree that Kyiv is not really interested in the visit of the IAEA mission to the Zaporozhye nuclear power plant, as this ties his hands.

“Kyiv does not benefit from the presence of unbiased observers.

This destroys the constructed image of Russia as an aggressor.

It’s about to become obvious who is actually shelling a nuclear facility, and technical experts will not have a “compromising” opinion that they tried to promote in the Western press: allegedly shelling a nuclear power plant is not prohibited by conventions and such attacks are justified, ”explained in an interview with RT Deputy Director of the Institute for Strategic Studies and Forecasts of the RUDN University, member of the political council of the MGER Victoria Fedosova.

In addition, members of the delegation will have the opportunity to communicate directly with both ZNPP employees and local residents in order to learn more about how the “liberation” performed by the Kyiv authorities actually looks like, she noted.

At the same time, the expert expressed doubt that the Ukrainian side would dare to engage in any outright provocations during the IAEA visit.

“Kyiv has already carried out all diplomatic and non-diplomatic attempts to prevent the arrival of international observers, and now it will be disappointed that by no means on all issues and by no means the entire West will dance to the Ukrainian tune,” Fedosova said.

Vladimir Shapovalov, deputy director of the Institute of History and Politics of the Moscow State Pedagogical University, agrees with her point of view.

According to him, if the IAEA mission gets to the nuclear power plant, then it will be extremely difficult for Kyiv to hide evidence of its criminal activities.

“However, representatives of such countries as Poland and Lithuania can try to defend the interests of Kyiv in the delegation.

The rest of the participants, except for Serbia and China, can also hardly be called impartial, given that they are all either representatives of NATO countries or allies of the bloc, ”the analyst suggested.

Moreover, an information campaign is now being actively promoted, the purpose of which is to present everything as if it was Russia that opposed the IAEA visit to the nuclear power plant, Shapovalov recalled.

“The West has launched its traditional policy of misinformation and brainwashing the world community in order to impose on it an alternative picture of what is happening, in which supposedly peaceful Western politicians are preventing a catastrophe.

But in reality, everything is exactly the opposite: the West is an accomplice of Kyiv in crimes, ”Shapovalov emphasized.

Victoria Fedosova believes that, despite the ambiguous composition of the IAEA delegation, her visit to the ZNPP can have a beneficial effect on the situation around the facility.

“There will be permanent observers at the station, which means that the topic of provocations can be closed.

And Kyiv should not expect any political or military concessions.

Experts will be able to adequately assess the situation, and Russia will continue to ensure the safety of the station on its own,” she concluded.