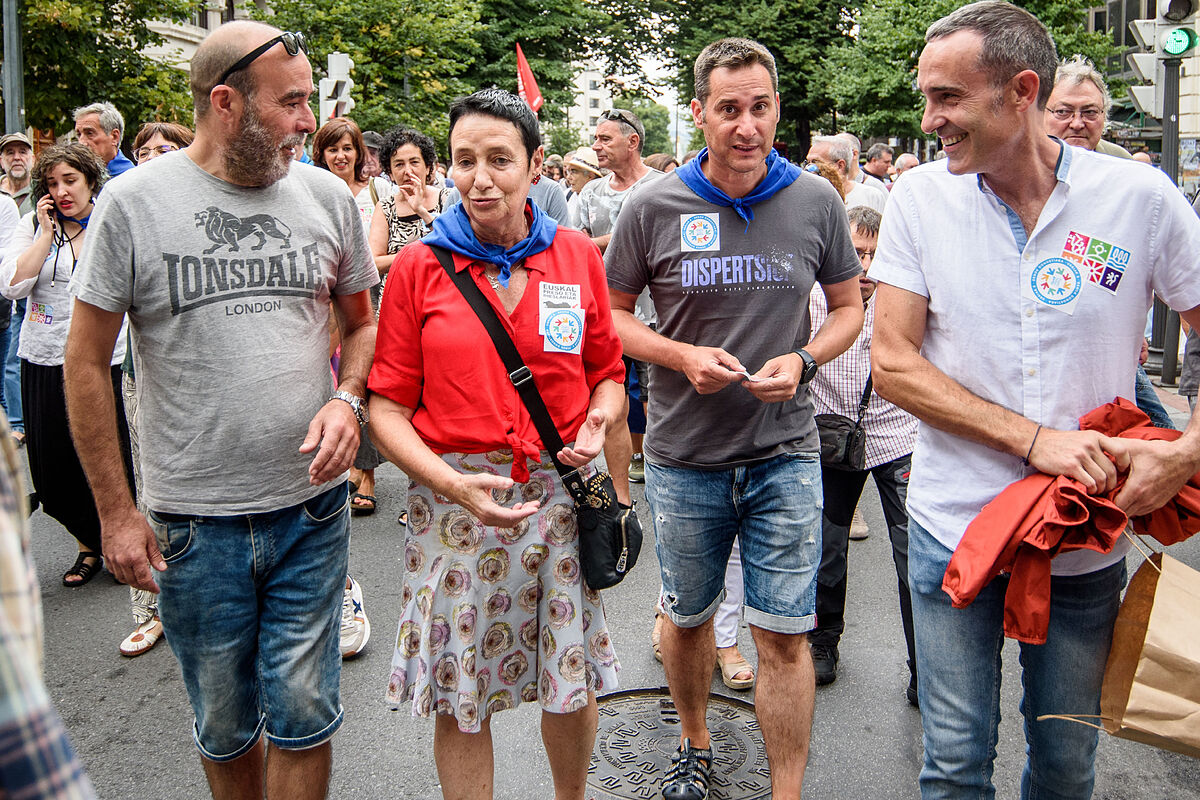 The members of the terrorist group ETA,

were admitted this Friday to the Basque prisons controlled by the Basque Government since October 1, 2021. Five of them were interned in the

(Vizcaya) and two in the

To facilitate the accommodation of this new consignment of ETA members, the Basque Executive also transferred this Friday some thirty common prisoners - most of them foreigners - who from now on will serve their sentences in the Spanish prisons of

While those convicted of terrorism arrived in the

, more than 2,000 protesters walked the streets of

to demand that all ETA members make their way back "home".

The three prisons controlled by Counselor

(PNV) experienced an intense day this Friday with the arrival of 10 inmates convicted of serious terrorist crimes.

, who is already in the Basauri prison, was sentenced to 28 years in prison for providing information to the ETA commando that placed a device under the vehicle of prison official

Before being murdered, Casado was harassed by unknown assailants who destroyed the mailbox of his home.

Although Bravo lived in

The Basque Government has placed him in the Biscayan prison of Basauri, the center in which the increase in the number of inmates and the lack of personnel has already facilitated a massive fight between almost thirty inmates on July 21.

The Basque Executive has coordinated the reception of these 10 ETA prisoners - there are already almost a hundred in Basque prisons - with the release of 28 common prisoners, the vast majority of whom are foreigners.

The Urkullu Executive took 13 inmates out of Zaballa this Friday, another 10 prisoners who left the Martutene prison and another five from the Basauri prison in

«The inmate population in Basque prisons has increased by 25% in the last year, and ETA prisoners demand compliance conditions such as using individual rooms and being in the 'respect modules' (areas self-managed by the inmates themselves ) that force the directorates to free up spaces with the transfer of the common ones to other Spanish prisons, ”says union sources.

All the trade union centrals with delegates in the three Basque prisons criticize the implementation of the so-called 'Basque prison model' because it has a deficit of 140 staff vacancies in a joint staff of 700 officials.

An “absolute failure”, as the

unions have described the prison management of the Urkullu Executive.

Those convicted of terrorism arrived in the Basque prisons on the same day that some 2,000 people summoned by the

platform and by the Bilbao troupes demonstrated in its streets to demand the transfer to Basque soil of all ETA members and to point out the judges and prosecutors of the National Court who question the granting of third degrees.

before the end of the current legislature.

"It makes no sense that judges and prosecutors are blocking the way back home [of the ETA members] with the legislation in the hands of prisoners when they ask for grade progressions," Azkarraga denounced, without clarifying how many requests authorized by the Basque Government have been suspended by the Justice.

Azkarraga, who was Minister of Justice of the Basque Government, has come to accuse judges and prosecutors of imposing their ideology on the "rights" of ETA prisoners without mentioning any of them.

"The President of the Spanish Government promised four years ago to end this prison policy," recalled the spokesman for Sare, a platform that has the support of the

"We talk to everyone to solve these things; we don't talk to the bishop of

but to the authorities that can help solve these things," answered Azkarraga, who, according to a report from the Civil Guard, has maintained telephone communications with the Secretary General of Penitentiary Institutions,

"We hope that this year, the distancing [of ETA prisoners] is overcome", Azkarraga said before the start of the demonstration that ran through the streets of Bilbao with the presence of EH Bildu leaders such as

and former leaders of

Arzuaga, parliamentarian and lawyer for ETA prisoners, is part of the EH Bildu delegation that periodically analyzes the situation of the gang's prisoners with the directors of the three Basque prisons.