The Mossos d'Esquadra are investigating a tragic event on the Capellans beach in Salou (Tarragona) this Thursday at noon. The 112 emergency phone received a notice... 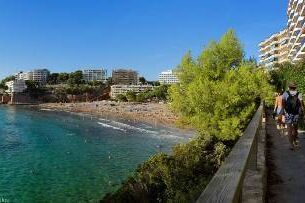 The Mossos d'Esquadra are investigating a tragic event on the Capellans beach in Salou (Tarragona) this Thursday at noon.

The 112 emergency telephone number received a call at around 3:35 p.m. for a possible multiple drowning on the beach.

The lifeguards have observed a group of bathers with problems in the water in the area of ​​the rocks, so they went there and have taken three people out of the water: Two adults, aged 60 and 46, and a minor under 15 years old, son of the man of 46. All three of Romanian nationality.

The rescuers began cardiopulmonary resuscitation maneuvers on the three until the arrival of the six ambulances displaced by the Medical Emergency System (SEM) together with a medicalized helicopter.

Despite this attention, the two adults have died and the minor was transferred in critical condition to the Juan XXIII hospital in Tarragona.

The SEM has also activated the team of psychologists to care for the rest of the family.

The Salou Local Police evacuated the beach to allow the SEM helicopter to land.

With the two fatalities this afternoon, there are 19 people who have drowned on Catalan beaches this summer.

Civil Protection recalls that the Capellans beach is under surveillance and at the time of the tragedy the flag was changed from yellow to red due to the mistral wind, which is why they stress the importance of bathers following the rules.