Did the pound and the conditions of the IMF overthrow the Egyptian Central Governor, Tariq Amer?

The resignation of the Governor of the Central Bank of Egypt, Tarek Amer, from his position unexpectedly sparked; Many questions and speculations about its highly sensitive timing, and its relationship to the country's new monetary policy. 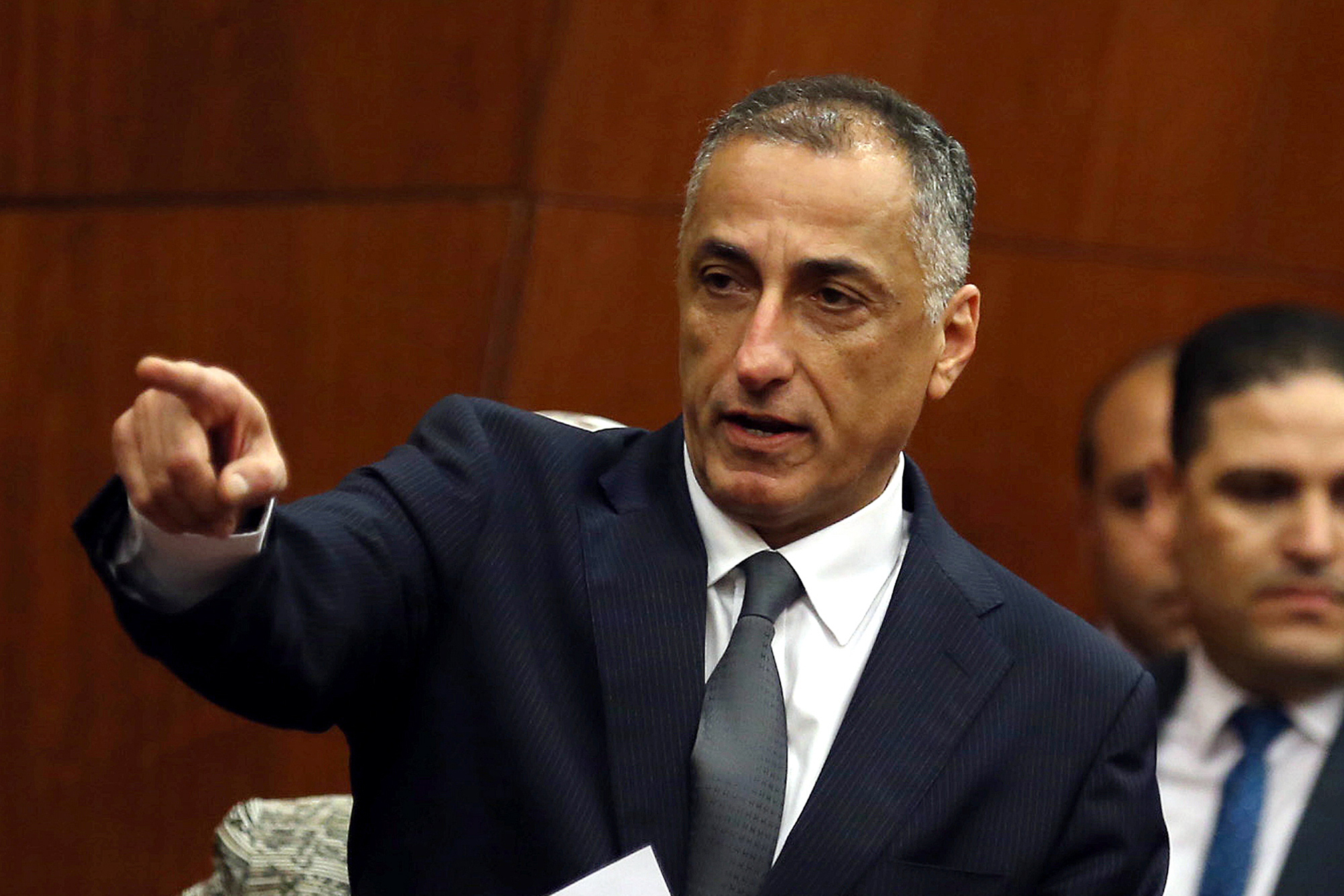 The Egyptian Central Bank's governor, Tarek Amer, has unexpectedly resigned from his post;

Many questions and speculations about its highly sensitive timing, and its relationship to the country's new monetary policy, and even the economic situation in general, given the great role entrusted to it to control the state's monetary policies.

What increased the intensity of these speculations was that the governor’s resignation came just one day before the Monetary Policy Committee of the Central Bank of Egypt meets to consider interest rates today, Thursday, August 18, 2022.

Earlier this week, news circulated about Amer's resignation, but Gamal Negm, the first deputy governor of the Central Bank, confirmed its incorrectness, describing it as "fabricated rumors" that negatively affect the central bank and local banks.

Negm went - according to a statement published on the Middle East News Agency - to say that "the rumors are driven by the purposes, interests and ambitions of those who are behind their promotion, especially in light of the great role played by the Central Bank in protecting about 9 trillion pounds (the dollar = 19.15 pounds), representing Citizens’ deposits that are maintained in accordance with strict and strict control rules.”

Amer's second term of office ends - according to Najm - in November next year 2023, and he said that the decision to assign the governor and its continuation is in the hands of the President of the Republic only, according to the constitution.

Yesterday, Wednesday, August 17, 2022, Egyptian President Abdel Fattah El-Sisi issued a decision appointing Amer as an advisor to the President of the Republic, and thanked him for the effort he made during his tenure in charge of the Central Bank, and accepted his apology for continuing in his position.

Despite what was raised about whether this step was a resignation or dismissal, it comes at a very sensitive time, and in economic conditions that the country's political leaders describe as difficult and unprecedented, in addition to the failure to reach an agreement with the International Monetary Fund in the negotiations that have been going on for months to obtain new financing. To open closed borrowing arteries.

Article 216 of the Egyptian Constitution includes the mechanism for appointing the heads of independent bodies, and a decision is issued by the President of the Republic to appoint the governor of the Central Bank, for a period of 4 years, renewable once, after the approval of the House of Representatives by a majority of its members.

The most important of which is his great role in setting the rules of international governance, through the restructuring of all banks, including the Central Bank, and the building of a strong foreign exchange reserve that contributed to increasing confidence in the Egyptian economy, fading the foreign exchange gap, and reducing the dollar gap from $ 3.9 billion in February 2022 to only $400 million in July of the same year thanks to the decisions of the Central Bank to regulate imports.

The most important point, according to Najm, is the same as the point of contention, as some say with the IMF, which was the reason for his resignation, and which was mentioned in the statement, "It is not possible for the Central Bank to make a significant reduction in foreign exchange rates in The next stage is based on these developments.

On March 21, 2022, the Central Bank of Egypt allowed a new devaluation of the currency to about 18.15 per dollar from its previous level of 15.60 pounds against the dollar, a drop of more than 15% before continuing to decline until 19.18 pounds.

A step that was preceded by a steady decline in #Egypt's monetary reserves and a decline in the value of the currency...The resignation of the Governor of the Central Bank of Egypt #Tarek_Amer after nearly seven years in office |

Amer from flotation to protection

One of Amer’s most prominent decisions since assuming his leadership duties was the process of floating the pound and reducing it from the level of 8.80 to about 19 pounds, in order to make way for the government to conclude an agreement with the International Monetary Fund at the end of 2016 to obtain a loan of $12 billion.

Egypt obtained additional loans in 2020 worth $5.2 billion under the “Credit Standby Agreement” and another $2.8 billion under the “Rapid Financing Tool” agreement, and it is now conducting tough negotiations with the International Monetary Fund to obtain a new loan in light of a financing crisis. sharp.

Many - including Sharif Othman, a banking expert in America - believe that Amer followed the “managed” flotation policy, through which he raised the value of the pound from the level of 19 pounds to the dollar after the 2016 float to 15.60 pounds in 2019, by supporting him from the cash reserve and not imposing restrictions. Tight import to save foreign currency, except in the recent period.

Othman explained, in statements to Al-Jazeera Net, that the central bank did not leave the pound to supply and demand, and it is the one who controls the price of the pound through its tools in the market, which are the Al-Ahly and Egypt banks, but there is pressure from the International Monetary Fund to stop supporting the pound more than its real value, which is determined According to the deficit and surplus in many economic indicators.

The Central Bank of Egypt had decided suddenly in February 2022 to stop dealing with collection documents in the implementation of all import operations, and dispensed with documentary credits only, with the aim of restricting import;

What are the effects of different reactions between supporters and opponents.

Egypt needs to raise $41 billion to pay off the current account deficit and due debts by the end of 2023, and faces the risk of depleting its foreign exchange reserves if it does not obtain new loans, in light of a wave of investment flight worth $20 billion this year, according to government data.

The country's foreign exchange reserves have fallen by about 20% to $33.14 billion this year, due to higher commodity prices, capital outflows and rising borrowing costs.

Egypt's external debt reached its highest level ever, rising by 17% on an annual basis and reaching $157.8 billion in the 3 months from January to last March.

The longest-lived of them is Farouk Al-Oqdah, and the last of them is #Tariq_Amer.. Which governor of the Central Bank did you own money during his tenure?

In this context, Suhair El-Damaty, a banking expert and former Vice President of Banque Misr, ruled out that Amer’s resignation came against the background of what is being raised on the communication sites, that there is a disagreement within the economic decision-making department about the extent of response to the request of the International Monetary Fund to provide greater flexibility in the price Exchange.

Speaking to Al-Jazeera Net, Al-Damaty said that the presence of different points of view does not mean that the resignation, and in the end, everyone works in the interest of the Egyptian state.

And if Amer's resignation means changes in the central bank's policy, she made it clear that any new governor will have his own vision that is compatible with the state's vision and economic program, and the coming period is very important and the state is making great efforts to deal with the economic conditions arising from the global crisis.

The banking expert indicated that the response of any governor to the conditions of the International Fund is a joint decision between the Central Bank, the Ministry of Finance and many concerned institutions, and not an individual decision.

She expressed her aspiration that the state would be able to deal with the decades-old currency issue, that there would be long-term stability in the exchange rate of the pound against foreign exchange, that it would not be exposed to frequent fluctuations, and reduce the gap between export and import.

The resignation of the Governor of the Central Bank of Egypt # Tariq_Amer ignites the trend in the country, and questions about the future of the economy in light of high inflation # Your post pic.twitter.com/fId715px1I

For his part, economist Ibrahim Nawar said that "there are many problems within the economic group, and there is already confusion, and I want to remind that the International Monetary Fund demands greater flexibility in the exchange rate system, and says that this is necessary to help absorb or face internal and external shocks."

And regarding the negative numbers related to the volume of debts that reached record levels, the foreign exchange reserves that fell sharply, the devaluation of the pound significantly and the rise in inflation, and their relationship to Amer’s resignation, Nawar stressed in his speech to Al Jazeera Net that he is not inclined to hold Tariq Amer responsible for what is happening, but the government In general, she is in the middle of a very bad dilemma, according to his description.

The resignation step was welcomed by some opponents of the former governor's policy, on social media, including opposition parliamentarian Diaa El-Din Daoud, who ruled out that things would improve with his departure;

"Because it requires alternative policies that provide an attractive climate for investment."

The resignation of the Governor of the Central Bank # Tariq_Amer provokes mixed reactions on social media platforms in # Egypt pic.twitter.com/a2iBe133Ei