Dead and wounded in Russian strikes on Ukraine's Kharkiv

The Ukrainian authorities announced yesterday that the Russian bombing of the city of Kharkiv in eastern Ukraine killed at least 11 people, in addition to wounding 35 others. The bombing coincided with Moscow warning of the dangers of a nuclear disaster at the Zaporizhia plant, accusing Ukraine of planning a "provocation" there within the next few days. 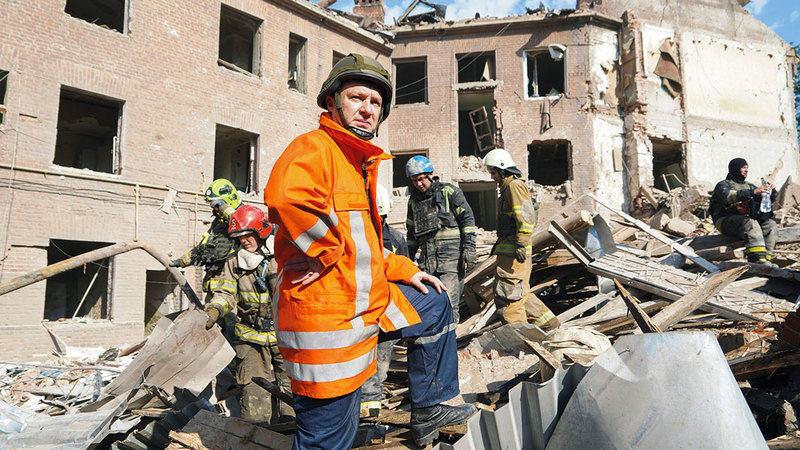 Dead and wounded in Russian strikes on Ukraine's Kharkiv

Rescuers work out at the wreckage of a building in Kharkiv.

The Ukrainian authorities announced yesterday that the Russian bombing of the city of Kharkiv in eastern Ukraine killed at least 11 people, in addition to wounding 35 others.

The bombing coincided with Moscow warning of the dangers of a nuclear disaster at the Zaporizhia plant, accusing Ukraine of planning a "provocation" there during a visit by UN Secretary-General Antonio Guterres.

In detail, 11 people were killed and more than 35 others were wounded in Russian shelling early yesterday in the Kharkiv region in northeastern Ukraine.

And the authorities announced that Russian missiles targeted the city of Krasnohrad, south of Kharkiv, killing two people and wounding two others.

The bombing came hours before the meeting between Turkish President Recep Tayyip Erdogan and United Nations Secretary-General Antonio Guterres in the west of the country, and in the wake of Russian strikes on Kharkiv that killed at least seven.

The governor of Kharkiv said that Russian forces fired eight missiles from Russian territory, hitting the western and northern neighborhoods of the city.

In the southern Slobedsky district, a four-story dormitory was hit by a missile, and the building was partially destroyed.

Separately, Sengupov said that Russian missile attacks on the town of Krasnograd, about 100 kilometers southwest of Kharkiv, destroyed several apartment buildings in strikes that killed two civilians and injured two, including a 12-year-old boy.

Meanwhile, Russia warned of the dangers of a nuclear disaster at the Zaporizhia plant and accused Ukraine of planning a "provocation" there during a visit by UN Secretary-General Antonio Guterres and his meeting with Turkish President Recep Tayyip Erdogan.

The United Nations announced that Guterres arrived in the Ukrainian city of Lviv on Wednesday evening.

According to a statement issued by the Turkish presidency, the meeting discussed a range of topics, including efforts to "end the war between Ukraine and Russia through diplomatic channels."

Ankara said the three leaders will also discuss ways to maintain the movement of Ukraine's grain exports to world markets.

Guterres and Erdogan had brokered the conclusion of an agreement at the end of July between Russia and Ukraine on the export of Ukrainian grain and an end to the blockade imposed on Ukrainian ports since the beginning of the war that started last February.

Guterres is scheduled to visit the Joint Coordination Center for Monitoring Grain Exports through the Black Sea in Istanbul on Saturday.

The Russian Defense Ministry accused Ukraine of trying to orchestrate a minor accident at the Zaporizhia station in southern Ukraine to blame Moscow.

Russian Defense Ministry spokesman Igor Konashenkov told reporters that Moscow was taking measures to ensure safety at the complex, and denied that it had deployed heavy weapons in and around the station.

The ministry stated that the station could shut down if Ukrainian forces continued to bombard it.

Igor Kirillov, commander of the Russian forces for protection against nuclear and biological weapons, said that the station's backup support systems were damaged as a result of the bombing.

For its part, the Russian Defense Ministry announced yesterday that its forces do not deploy heavy weapons at the Zaporizhia nuclear power plant in Ukraine.

"The Russian forces do not have heavy weapons either on the territory of the station or in the surrounding areas," the ministry said in a statement.

There are only guard units.

The Secretary-General of the North Atlantic Treaty Organization (NATO) Jens Stoltenberg said Wednesday that an inspection of the plant by the International Atomic Energy Agency is urgent.

Stoltenberg said at a press conference in Belgium that the Russian soldiers' control of the site "constitutes a serious threat to its security and increases the risk of a nuclear accident or accident." The total for ships that sailed from Ukraine's Black Sea ports under an agreement to export grain amounted to 25.