Sarah turned into Youssef, so she lost her job and her family

Sarah lost her family, her job, and everything she owned as a price for her transformation into a male in his thirties, after doctors discovered that she suffers from “intersex disease”, a sexual identity disorder, with which male genitalia appear in the girl’s body, which led to her rejection by her community. who rejects the idea of 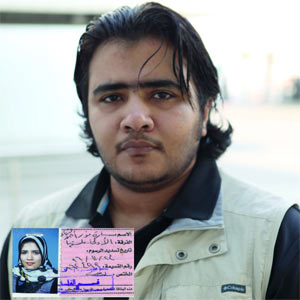 Sarah turned into Youssef, so she lost her job and her family

"Youssef" before and after his transformation. Emirates Today

Sarah lost her family, her job, and everything she owned as a price for her transformation into a male in his thirties, after doctors discovered that she suffers from “intersex disease”, a sexual identity disorder, with which male genitalia appear in the girl’s body, which led to her rejection by her community. Who rejects the idea of ​​transformation and the negative view from all sides, according to the words of "Youssef", which is the name he chose for himself, after he became a male.

Youssef appears in the form of a full-fledged young man, with a mustache and a beard, but he needs more surgeries, to complete his transformation into a male.

Youssef told "Emirates Today" that he has become completely socially isolated, after everyone who knows him rejected him and cut off his relationship with him, and he is also undergoing psychiatric treatment at Sheikh Khalifa Hospital in Abu Dhabi, to overcome the consequences of gender transition.

He explained that his suffering when he was a female named “Sarah”, began when he entered the state in the form of a young man after the conversion process, so he went to the passport officer, and presented two passports, one for a female named Sarah with state residency installed on him, and another for a male named “Youssef”, but the officer ordered By arresting him until the truth of the incident was revealed due to his suspicion of a forgery case, and ordered his transfer to the Public Prosecution.

According to the Public Prosecution’s report, Sarah entered the country with her father in 1999 and worked several jobs under the same name, then left her to Egypt in 2008 to return with the new name, after she underwent a treatment that removed “the deformity in her genitals, after doctors advised her to turn into a male, so she was given a number of surgeries, and extracted the required documents from the competent authorities in the Arab Republic of Egypt, and finally entered Sheikh Khalifa Medical Hospital, due to symptoms of severe depression and suicidal tendency.

The prosecution said that the case papers were free of any crime that could be attributed to “the defendant, because the process was carried out in accordance with scientific principles, so the suspicion of the crime of impersonation of others and entering the country illegally, because Sarah is the same Yusef, was excluded.”

Sarah added that she faced funny events during her arrest because of her conversion, as the prison officials refused to receive her at first, and were confused in front of her identity, and whether she would be imprisoned in women's or men's prisons, but the matter ended with him being placed in solitary confinement.

Youssef recounted the details of his suffering with his stepmother, who refused to turn Sarah, especially in the identification papers, for fear that her 19-year-old son would join the compulsory service in the Egyptian armed forces, as the law exempts the only son from service, and therefore the appearance of a male brother for her son means that he will be subjected to military service, which He pushed her to harass him, asking to drop his passport from the official records, and keep his female passport, but the Egyptian authorities refused.

Youssef said that his operation opened the door to resentment against him, as his father traveled with his wife to the State of Qatar, and the money was cut off from him, and he does not speak to him at all, despite his need to complete his treatment in Canada.

Youssef appealed to the good people to help him complete his treatment, and pay the amount of 40 thousand dirhams in arrears to banks, due to his cessation of work, knowing that he worked in many fields and large companies in the state in the name of Sarah, and also worked in the animal trade after his return in the name of Youssef, but his psychological condition and treatment Long in the hospital led to the accumulation of indebtedness.