Donbass: these inhabitants who have chosen to go under the Russian flag

According to the Ukrainian authorities on Monday evening August 15, more than a quarter of the inhabitants of the Donetsk region still under their control have not evacuated despite repeated calls to do so. Fatalism or... 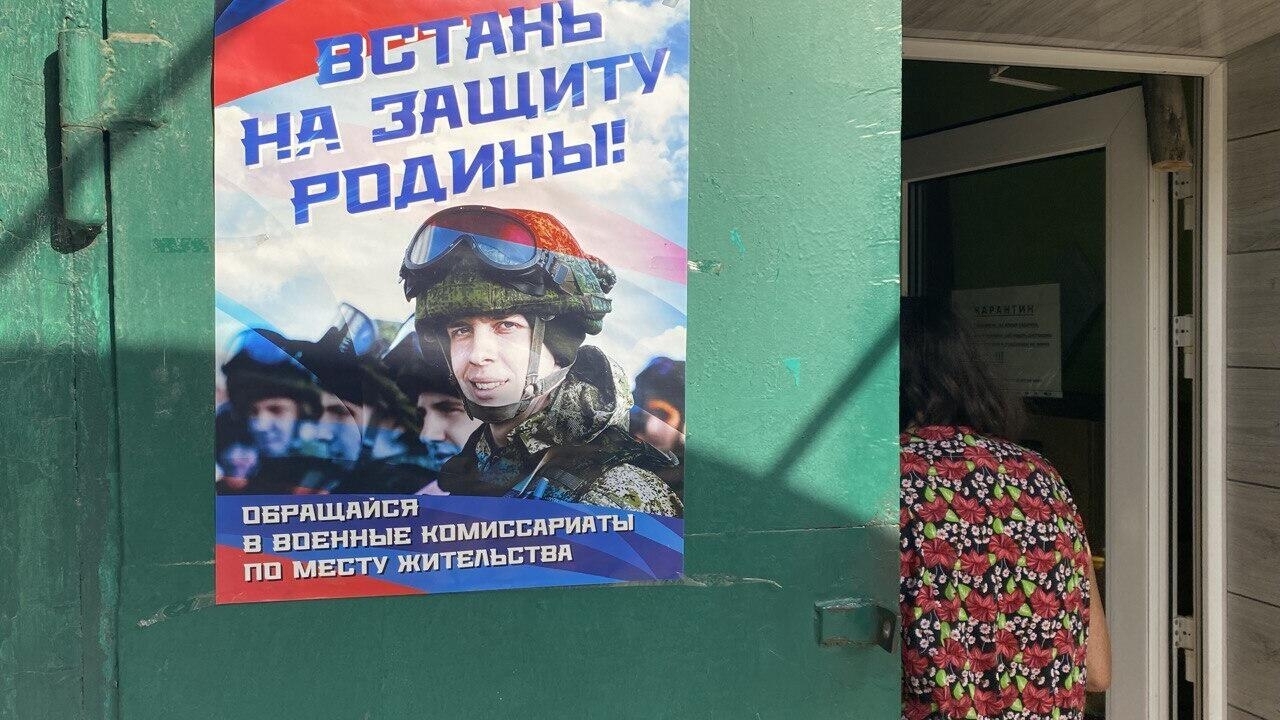 Donbass: these inhabitants who have chosen to go under the Russian flag

Russian army poster calling on the people of Svetlodarsk to join its ranks.

According to the Ukrainian authorities on Monday evening August 15, more than a quarter of the inhabitants of the Donetsk region still under their control have not evacuated despite repeated calls to do so.

Fatalism or pro-Russian convictions, reporting on those who chose to stay despite the violence of the fighting.

From our special correspondent in Berdiansk and Svetlodarsk,

We meet her in Berdiansk during a press trip organized by the Russian army.

Larissa, 59, with cropped brown hair tinged with red, stands aside from the commotion, statements and speeches in front of the cameras.

The waves by the sea are nearby, so in this sweltering summer, she is cooling off on the balcony of the apartment in a building that the new pro-Russian authorities have assigned to evacuees from Ukraine.

On March 17, we were evicted from our house in Ugledar (town in the region still today under the control of Ukrainian forces, editor's note).

Fourteen people, with children and grandchildren.

The Ukrainian army came and took us out overnight.

They told us we had to get out, that they needed a house.

We had to make do at random.

We went to Dnepropetrovsk.

We were promised to stay there for two weeks, but we were only given one day.

We were then offered to go to western Ukraine, but we don't know anyone there, no one is expecting us there, and we thought that we would be humiliated there, because we only speak Russian .

We all studied Ukrainian at school, my husband speaks Ukrainian,

but in everyday life we ​​are Russian speakers.

So we left for Zaporozhye.

then arrived here in Berdyansk.

How did she cross the front line with her whole family?

It was mainly the Ukrainians who asked us questions.

Why we were going to the occupiers, why Russia, etc.

We replied that we were going to be closer to our families and friends.

We were among the first to cross that line.

It was March 20, and we've been here for five months.

When we passed the first checkpoint, Chechens were there, they said to us: “Relax, now you are at home.

Thank God no one offended us, no one touched us.

A choice that Larissa assumes again and again at the cost of heartbreak in her family.

She and her brother, who now lives in Kiev, first started a dialogue of the deaf: "

I told him that we had been expelled,

he replied that it was impossible, that it couldn't be true.

Butcha, who bombs who... the subjects of violent disagreements and disputes have multiplied.

They haven't spoken to each other since April 1.

In Svetlodarsk, a small town in the Donetsk region taken by Russian and pro-Russian forces on May 28, we come across, in the tree-lined courtyard of a building, three generations of women on a bench: Natacha, Anna, Liliana.

Free buses and trains, they say, ran daily almost until the last moment to evacuate those who wished to go to areas controlled by kyiv.

Svetlodarsk market destroyed by Ukrainian shelling, according to one of the townspeople.

Among the three women, the oldest stayed first, she says, because of her five cats: it was too complicated for her to leave with them.

And above all, the three women agree: no place in Ukraine is safe anymore anyway.

But at that time there were no fights on the territory of Ukraine, you could go to Bakhmut, for example.

Missiles and rockets can hit any location at any time.

My relatives went to the Dnepropetrovsk region, and there too rockets hit.

How did they know in this city still almost cut off from the world?

The three women exchange their first brief smile: a neighbor, they explain, has managed to find a place in the city where there is a connection.

Everyone has passed the word and scrolls, since, in this place to exchange brief news.

In Svetlodarsk too, the security climate is still very unstable.

Nikolaï, whom we meet in shorts and a tank top in the scorching and stifling wind of August, pulls us by the sleeve: he absolutely wants to show us something.

Come, come and see how our market was destroyed yesterday.

A few tens of seconds on foot from the city center decked out with Russian flags every two meters: a crater several meters high and two men with their faces closed who finish picking up the debris.

Here, the stalls, the shops, the minibuses, everything we liked was there

Like this cafe, we've all been going there for about twenty years.

It was the meeting place for young people in the evening, but also the place where you knew you were always going to come across someone to chat with.

It was destroyed in moments.

At 4 p.m. there were three projectiles.

It hurts the owner to see this, it hurts us all.

And when asked who he thinks fired, Nikolai is indignant: “

But how come, who fired?

But anyway, it's the Ukrainian army, of course.

Who do you want it to be?

Anger against the shots attributed to Ukraine among some of those who remained, but also a very old resentment.

Vitali, 51, is getting ready to shop in one of the three grocery stores that are still open.

Before entering this large stall with the shelves still supplied, despite the absence of electricity and the prices displayed in Ukrainian hryvnias and Russian roubles, this mechanical worker unhesitatingly details the litany of reproaches he has leveled at kyiv.

Have you traveled to Ukraine?

Well, know that when you come back to the Donbass, it is obvious that we have been forgotten.

The various governments have never paid attention to us.

They didn't care about us, or they didn't really want to pay attention.

There has never been any investment here.

I would like Russia to come here and establish itself deeply.

Russia is a great power, a great country.

A lot depends on him, especially our life here.

We really hope today that the Russians will help us, both for work and for our living conditions.

In any case, it is undoubtedly to them that this poster of the Russian army is addressed on the door of the grocery store, a poster calling on the inhabitants to commit themselves.

Russian army poster calling on the people of Svetlodarsk to join its ranks.

For Igor Vladimirovich Zakharevich, head of the administration of the city of Debaltseve and also responsible for the cities of Svetlogarsk and Mironovsky, these posters are aimed at "

people who want to defend their homeland, who are ready for it, as in any which country.

It's just for people who of their own free will want to get involved.

there is no need for forced mobilization, we must stick to voluntary work.

It's impossible to force a person to fight.

Let's imagine that someone ends up with a weapon without convictions;

well, he will be killed as soon as he sets foot on the battlefield, that's all.

Or else he will try to run away.

Igor Vladimirovich Zakharevich appears focused on humanitarian aid, water and electricity supply, the payment of pensions for retirees and affirms that there is no question of mobilizing the men of these conquered territories.

Unlike Russia, where this subject is not on the table, all men aged 18 to 55 from the pro-Russian separatist regions of Donetsk and Luhansk were mobilized as of February 19.