The war in Ukraine... Explosions rock a Russian base in Crimea and an expected tripartite meeting between Erdogan, Zelensky and Guterres

Tuesday's explosions rocked a military base in the Crimea, which Moscow described as acts of sabotage, while a tripartite meeting is expected to take place in Ukraine between Erdogan, Zelensky and Guterres on Thursday. 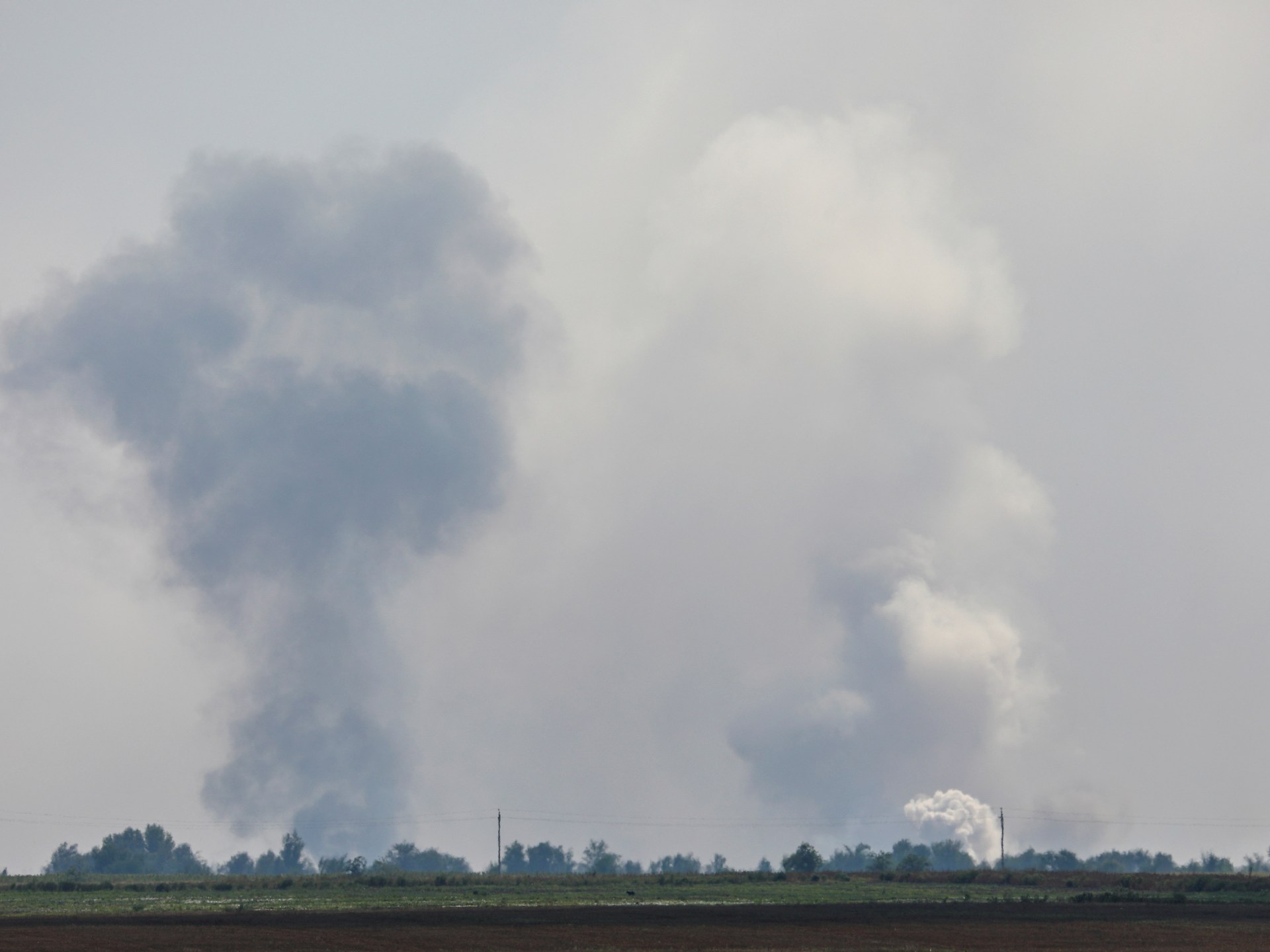 Today, Tuesday, explosions rocked a military base in Crimea, annexed by Russia, after which Moscow condemned what it described as sabotage that caused the explosions, and Ukraine hinted its responsibility, while United Nations Secretary-General Antonio Guterres, Turkish President Recep Tayyip Erdogan and Ukrainian Volodymyr are expected to meet. Zelensky on Thursday in Ukraine.

Russian officials and news agencies said explosions rocked an ammunition depot at a military base in northern Crimea, an important supply line for Russia's war on Ukraine, disrupting trains and evacuating 2,000 people from a nearby village.

The Russian Defense Ministry announced that a military ammunition depot in Crimea was damaged as a result of a "sabotage operation", as it described it.

The ministry added that the damage caused by the "sabotage act" extended to a power station, a railway line and residential homes.

The ministry had announced the control of a fire that broke out after an explosion in a temporary storage site for ammunition in a military unit near the town of Maiskoy in the north of the Crimea.

In turn, the Crimean authorities announced the injury of two people as a result of the explosion of munitions.

The Russian newspaper "Kommersant" said that plumes of smoke were later seen at another Russian military base in central Crimea, while explosions hit a third facility in the west of the province last week.

Russian media sites broadcast pictures that they said were of the fire that broke out in power transformers in the Zhankoy region of the Crimea.

The RIA said 7 trains were delayed, and rail traffic was suspended on part of the line in northern Crimea.

For his part, Russian Defense Minister Sergei Shoigu accused Western intelligence of providing Kyiv with the coordinates for carrying out military strikes.

In a speech before the Tenth Moscow Conference on International Security, Shoigu considered that his country's military operation in Ukraine dispelled what he described as the myth of Western weapons.

Ukraine has hinted at its responsibility for the explosions, which, if true, shows its ability to strike at a deeper extent inside Russian territory, which could change the course of the 6-month-old war.

The New York Times quoted a Ukrainian official as saying that a Ukrainian military unit operating behind "enemy" lines had targeted a Russian ammunition depot in Crimea.

The newspaper said that the explosion came a week after bombings targeting a Russian air base in the same area that destroyed several fighter planes.

She noted that although Ukraine's leaders had not claimed responsibility for the operation, Presidential Adviser Volodymyr Zelensky confirmed the explosions in an area that until last week appeared to be safe under Moscow's control and outside the scope of the attacks.

In an apparently ironic reference to one of Russia's pretexts for the war, Ukrainian Presidential Adviser and Chief of Staff Andrei Yermak praised on social media the progress of Ukraine's "disarmament" process.

"The 'disarmament' process will continue in a specific manner for the Ukrainian armed forces until the occupation of Ukrainian lands is completely ended. Our soldiers are the best in boosting morale," Yermak wrote on Telegram.

The explosions raised the prospect of new equations in the six-month-old war, particularly if Ukraine now has the ability to strike deeper into Russian territory, or if pro-Kiev factions succeed in launching guerrilla-style attacks.

Russia uses Crimea, which it annexed from Ukraine in 2014, to supply military equipment to its forces fighting in other parts of Ukraine, a process Ukraine is striving to disrupt before a possible counterattack in southern Ukraine.

Crimea is the base of the Russian fleet in the Black Sea and is famous as a summer holiday resort.

Macron calls on Russia to withdraw from Zaporozhye station

French President Emmanuel Macron has called on Russian forces to withdraw from the Zaporozhye nuclear plant in southern Ukraine, stressing the "risks" their presence poses to the site's safety.

During a telephone conversation with his Ukrainian counterpart Volodymyr Zelensky, Macron stressed his "concern about the threat posed by the presence and activities of the Russian armed forces and the atmosphere of war with the ongoing conflicts over the security and safety of Ukrainian nuclear facilities and called for the withdrawal of these forces," according to the Elysee.

An expected meeting between Guterres, Erdogan and Zelensky

On the other hand, a spokesman for the United Nations said that the Secretary-General of the International Organization, Antonio Guterres, will travel to Lviv in Ukraine to meet President Zelensky and Turkish President Recep Tayyip Erdogan on Thursday.

He added that Guterres will also visit on Friday the Ukrainian port of Odessa on the Black Sea, where grain exports have resumed under a UN-brokered deal.

UN spokesman Stephane Dujarric said Tuesday that Guterres will meet with Zelensky in Lviv, western Ukraine, to discuss the situation at the Zaporozhye nuclear power plant, as well as to find a political solution to the conflict with Russia.

Next Saturday, Guterres is scheduled to visit the Joint Coordination Center in Istanbul, which includes officials from Russia, Ukraine, Turkey and the United Nations to oversee Ukraine's grain and fertilizer exports through the Black Sea.

The blockade of three Black Sea ports was lifted last July under an agreement between Moscow and Kiev brokered by the United Nations and Turkey, allowing hundreds of thousands of tons of Ukrainian grain to be sent to buyers.