Whether or not Tehran and Washington accept a "final" offer from the European Union to revive the 2015 Iran nuclear deal, diplomats, analysts and officials have said, neither is likely to announce its cancellation. Because keeping it serves the interests of both parties. However, the reasons for the two sides differ radically 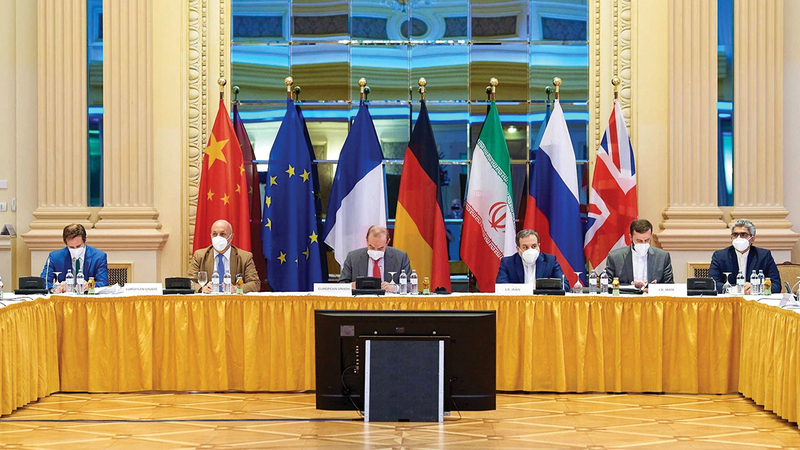 After the "final" offer from the European Union

Whether or not Tehran and Washington accept a "final" offer from the European Union to revive the 2015 Iran nuclear deal, diplomats, analysts and officials have said, neither is likely to announce its cancellation.

Because keeping it serves the interests of both parties.

However, the reasons for the two sides about this differ radically.

For the administration of US President Joe Biden, there are no clear or easy ways to rein in Iran's nuclear program, other than the agreement, under which Iran restricted its nuclear program in exchange for relief from economic sanctions, imposed by the United States, the United Nations and the European Union.

It would be difficult to use economic pressure to force Iran to further curb its nuclear program, as former President Donald Trump, Biden's predecessor, tried after pulling out of the deal in 2018, if countries like China and India continued to buy Iranian oil.

The high oil prices brought on by Russia's war against Ukraine and Moscow's overt support for Tehran represented Iran's economic and political lifeline, which helped convince Iranian officials that they could wait.

"Both sides are happy that the status quo continues," said a European diplomat, who spoke on condition of anonymity.

"We are not in a hurry," said a senior Iranian official, who also requested anonymity.

He added, “We sell our oil, and we have reasonable trade with many countries, including neighboring countries, and we have our friends like Russia and China, which are at odds with Washington;

And our (nuclear) program is advancing.

Why do we have to retreat?”

When Trump withdrew from the agreement, he said that the agreement was "very generous" with Iran, and then re-imposed harsh US sanctions, with the aim of stifling Iranian oil exports as part of a "maximum pressure" campaign.

After waiting for nearly a year, Iran began violating the deal's nuclear limitations, amassing larger stockpiles of enriched uranium, enriching uranium to 60% purity, well above the 3.67% limit under the deal, and using increasingly sophisticated centrifuges.

After 16 months of intermittent and indirect talks between the United States and Iran, with the European Union shuttling between the two sides, a senior EU official said on August 8 that the bloc had made a "final" offer and expected a response within "a very few weeks." ».

Diplomats in the region said the EU has told the parties that it expects a response on August 15, although this has not been confirmed.

There are no indications as to whether Iran intends to comply or accept the draft EU text.

The United States says it is ready to conclude a quick agreement on the basis of the European Union's proposals, is studying the text and will respond "as requested."

"The political balance has changed due to the Ukraine war, high oil prices and the escalating tension between Washington and China," a second senior Iranian official said.

So, time is not very important for Iran.”

Months after declaring that time was running out, US officials said they would continue to work on an agreement as long as it was in the interests of US national security, a formulation without a deadline.

Biden, a Democrat, is sure to come under fire from Republicans if he revives the deal ahead of the November 8 midterm elections, in which his party could lose control of the House and Senate.

"If the Iranians come tomorrow and say OK, we'll agree to the deal on the table, we'll do it regardless of the issue of the midterm elections," said Dennis Ross, a veteran US diplomat now at the Washington Institute for the Near East.

"It's not as if the administration is touting it as a great arms control agreement," he said.

Its position is that it is the least bad alternative available.”

Although Biden has announced that he will take military action as a last resort to prevent Iran from obtaining a nuclear weapon, Washington is never willing to do so, given the risk of a wider war in the region or Iran attacking the United States or its allies in other regions.

And criticism of the administration within the United States is likely to be more fierce, after the United States accused, last week, an Iranian man of plotting to kill the former National Security Adviser of the White House, John Bolton, and accusing (Iran) of being behind the attack on novelist Salman Rushdie.

The lack of better policy options for Washington, and Tehran's view that time is on its side, may put the agreement on hold.

In it, Henry Roma, an analyst at Eurasia Group, said, "Both the United States and Iran have compelling reasons to keep the possibility of an agreement alive, although neither seems to be willing to make concessions that would facilitate the actual revival of the agreement."

"It is unclear whether the Iranian leaders decided not to revive the agreement or did not make a final decision, but either way, it is likely that this suspension period will serve their interests," Rome added.

"The fact that the West has long threatened that time is running out has likely undermined its credibility in insisting that the agreement on the table is final and non-negotiable," he said.

The former US envoy to the Middle East, Dennis Ross, said that the administration of former President Donald Trump did not succeed in developing an effective deterrence strategy, and so far the matter has not changed for the Joe Biden administration.

Trump's policy of "maximum pressure" has failed to deter Iranian attacks, whether direct or through proxies, against American forces in Iraq and Syria, and against American interests and their allies.

Even the killing of Iran's Quds Force commander, Qassem Soleimani, did not stop proxy attacks against the United States, though it may have made Iran more cautious about killing Americans.

Ross adds that Biden's approach proved to be no more effective, as he accepted Iran's demand for indirect negotiations and allowed China to buy Iranian oil without penalty.

During the presidencies of Barack Obama and Trump, 20% enrichment of uranium was considered provocative, the dividing line between low and high enrichment.

• When Trump withdrew from the agreement, he said that the agreement was "very generous" with Iran, then re-imposed harsh US sanctions, with the aim of stifling Iranian oil exports.

• 60% is the degree of purity of uranium enrichment, which Iran has carried out, well above the agreed-upon limit.

• President Joe Biden, a Democrat, will be criticized by Republicans if he revives the deal before the midterm elections.