“Serious problems may arise”: what is behind the calls of Eastern European countries to the United States to speed up arms deliveries

The states on NATO's eastern flank are urging Washington to expedite arms deliveries and demand more troops to contain Russia. The authorities of Poland and the Baltic countries have repeatedly turned to the United States with relevant requests. According to US media, Estonia, Poland and Latvia want to receive HIMARS MLRS, Warsaw is also waiting for ordered Patriot air defense systems, F-16 fighters and Abrams tanks, and Tallinn is waiting for Reaper attack drones. However, according to experts, "the architects of such wishes" are American officials involved in the development of the military-industrial complex and planning the US military budget. However, analysts doubt that Washington will be able to supply these weapons, since it must first make up for its shortage, formed due to the supply of weapons to Ukraine. 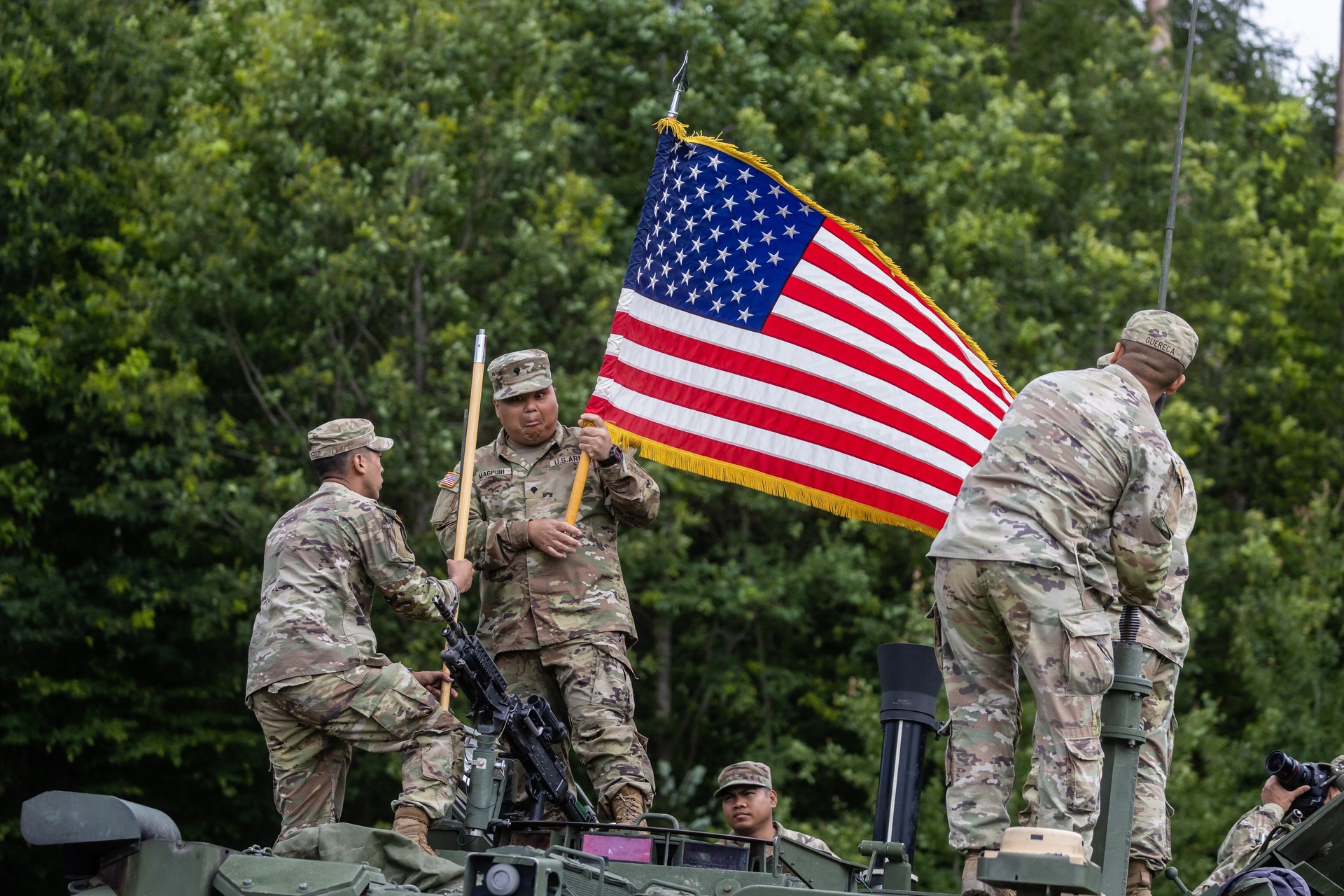 The countries of NATO's eastern flank have called on the United States to speed up the supply of weapons to them and are demanding more troops to contain Russia, The Washington Post writes.

“Like Ukraine, which is not a member of NATO, but is considered a close partner of the alliance, countries closest to (borders.

) Russia say they are in desperate need of additional military assistance from the West,” the WP article notes.

) Reaper, counter-battery radar is what we need most in terms of the lethal military force needed to contain Russia,” Kusti Salma, permanent secretary of the Estonian Ministry of Defense, quotes The Washington Post.

He also added that his republic is on the verge of a situation where she "will have to take risks."

“Very large risks associated with our national security, use part of our reserves.

And I know other allies are doing the same,” he said.

At the same time, Polish officials believe that if the United States could speed up the delivery of some of the weapons already promised to Warsaw, then this "would greatly help the defense position of Poland itself," WP notes.

We are talking, in particular, about Patriot anti-aircraft missile systems, HIMARS MLRS, F-16 fighters and Abrams tanks ordered by the Polish side.

Meanwhile, Latvian Defense Minister Artis Pabriks told reporters that his country wants modern, long-range rocket artillery, as well as air and coastal defense systems, which are usually not available to countries with a modest budget, writes The Washington Post.

As noted, during the visit of US Secretary of Defense Lloyd Austin this month, Pabriks said that Latvia, like Ukraine, absolutely needs to arm itself, since there is a real threat that the hostilities "will reach the borders" of the Baltic republic.

WP also reports that the Baltic and Eastern European countries are asking the United States to ramp up defense production to speed up arms orders.

As the newspaper notes, about 100 thousand American military personnel are deployed throughout Europe, and in recent months their number has increased by 20 thousand people, and the east is increasingly becoming the center of their concentration.

“But for countries located on the very borders of Russia, this is still not enough,” the newspaper writes.

"The military investments made over the past six months are gratefully received, but leaders in the region believe the alliance needs to act more assertively in the long term."

They believe that Russia poses an "existential threat to the West" and that a larger American presence in Europe is necessary "to contain Moscow," WP emphasizes.

Recall that back in March, Warsaw repeatedly asked Washington to expedite the supply of American weapons.

First, Polish President Andrzej Duda expressed his request to US Vice President Kamala Harris, and later in the same month to the head of the White House, Joe Biden.

According to the Polish leader, Warsaw wants its army to have modern equipment as soon as possible.

In turn, at the end of May, Lithuanian Deputy Defense Minister Vilius Semeshka agreed to accelerate the purchase of weapons by the Baltic Republic from the United States.

This is stated in a press release on the website of the Lithuanian Defense Ministry.

He also stated that Vilnius is considering, in particular, the strengthening of anti-tank and anti-aircraft weapons, the mobility of troops and the development of air defense forces.

Later, in June, the head of the Ministry of Defense of the Republic, Arvydas Anusauskas, also touched upon the issue of deliveries of priority weapons to Lithuania.

“Together with the Latvian and Estonian allies, we are considering the development of the potential of the HIMARS artillery missile system.

Lithuania plans to sign a corresponding contract by the end of this year,” the minister said.

Later that month, Lithuanian Deputy Defense Minister Margiris Abukevicius said that the Russian Federation allegedly posed a threat not only to Ukraine, but to the security of all of Europe.

In July, already the head of the Ministry of Defense of the Republic, Anusauskas, emphasized that Russia and its actions are a challenge to the security of the Baltic region.

A few days later, the press service of the Latvian Ministry of Defense told the American Defense News that Riga had sent a request to Washington to purchase HIMARS MLRS as part of a joint project with other Baltic states, hoping for Washington's co-financing.

In addition, the Latvian side plans to acquire coastal defense systems.

Estonia also requested the supply of MLRS HIMARS from the United States.

This is stated in the message of the Pentagon Office for Defense Cooperation and Security.

The Pentagon emphasized that the sale of HIMARS to Estonia, on the one hand, will help strengthen the national security of the United States and its partners, and on the other hand, it will help the Estonian side to strengthen its military potential.

However, the supply of such equipment allegedly “will not lead to a change in the basic military balance in the region,” the Pentagon claims.

Tallinn expects that Washington will supply it with six HIMARS MLRS by 2025, as well as missiles for them with a range of up to 300 km.

As noted in the General Staff of the Estonian Defense Forces, such systems make it possible to attack the most important objects and “enemy positions”.

As political scientist Alexander Asafov noted, “the architects of such wishes” are not the governments of Poland and the Baltic countries, but American officials involved in the development of the military-industrial complex and planning the US military budget.

“This is a way to inject money into the US military-industrial complex, which, with rising inflation, Washington needs to support.

And states such as Poland and the Baltic republics are largely called upon to fulfill this task.

In addition, it is necessary to somehow implement the US military budget, which increases every year.

Moreover, through new orders, prerequisites are being formed for an increase in the next budget, which will be discussed in the United States in November, ”Asafov said in an interview with RT.

The expert believes that when, in connection with the likely supply of weapons to Eastern Europe, the Pentagon speaks of strengthening the security of the countries of this region, he is, to put it mildly, disingenuous.

“Washington is deeply indifferent to the security of Poland and the Baltic countries.

At the same time, the Eastern European states themselves are lying when they call Russia an “existential threat” to the West.

This fabrication is absolutely speculative, there is no content behind them,” Asafov said.

However, the United States "may have serious problems" with the supply of weapons to the countries of Eastern Europe, according to military expert Ivan Konovalov.

“Too many American weapons went to Ukraine.

Now the US Army has a shortage of weapons in many respects, in particular Javelin anti-tank systems, and the Pentagon itself needs to compensate for a lot of things.

Despite the fact that sending weapons to Eastern Europe is new orders that stimulate the military-industrial complex, the United States still faces the main task now: to provide for its own needs.

And this is a serious challenge for the industry, ”the analyst said in an interview with RT.

At the same time, for the Baltic countries themselves, obtaining American weapons or accelerating their deliveries is “a kind of indicator of success,” Konovalov said.

“For Poland, getting as many American weapons as possible, and in an accelerated format, is an important factor confirming that Poland is the number one ally of the United States and the conductor of American interests in Eastern Europe.

They are strenuously trying to achieve this role.

And the Americans agreed with this approach.

Therefore, the Poles will continue to work in this direction.

For them, this is extremely important, ”Konovalov explained.

In addition, the expert also appreciated the information contained in the WP material that Eastern Europe wants more American presence "to deter Moscow."

“For the Baltic countries and Poland, the deployment of American forces is important, since it is a lot of money.

They earn a lot on the maintenance of American bases, airfields and other similar military infrastructure.

And in order for this whole plan to be implemented, the states of Eastern Europe need to talk all the time about the growing danger allegedly coming from Russia in order to capitalize on this myth, ”the analyst noted.

At the same time, experts agree that if the American HIMARS MLRS, Patriot air defense systems, F-16 fighters and Abrams tanks are nevertheless delivered to Eastern European countries, this will aggravate the security situation in the region.

“This will not play in favor of the overall security climate.

The United States with its supplies will only increase the military danger and tension in the region.

Russia will not leave such measures unanswered and will take prompt steps to strengthen its borders and positions,” the expert concluded.