Ukrainian President Volodymyr Zelensky announced that his country is targeting Russian soldiers who fire at the Zaporizhia nuclear power plant, which is controlled by Russian forces in southern Ukraine, or are using the station as a firing base from it, while a Russian diplomat called on the United Nations. 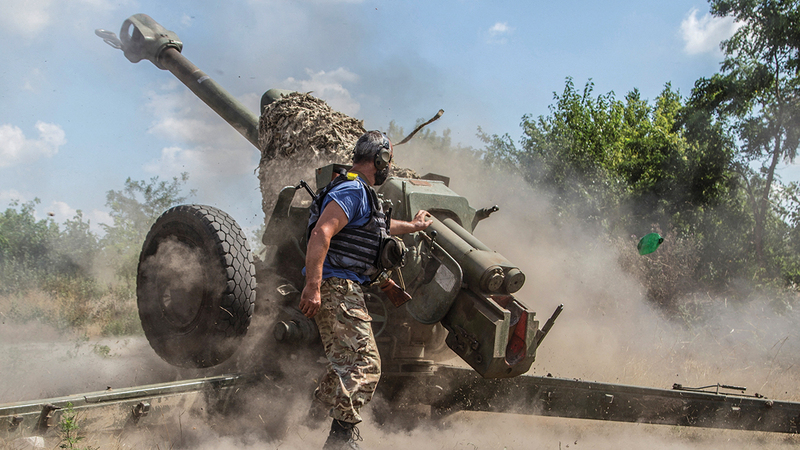 Russian diplomat: The United Nations prevented the visit of atomic energy experts at the last minute

A Ukrainian soldier shoots in one of the areas of confrontation with Russian forces.

Ukrainian President Volodymyr Zelensky announced that his country is targeting Russian soldiers who shoot at the Zaporizhia nuclear power plant, which is controlled by Russian forces in southern Ukraine, or use the station as a base for firing from it, while a Russian diplomat called on the United Nations to intervene for the safety of the station, and stressed That the United Nations Secretariat prevented experts from the International Atomic Energy Agency from visiting the nuclear power plant at the last minute.

Ukraine and Russia have traded accusations over the recent multiple bombings of the Zaporozhye plant, Europe's largest nuclear power plant.

Russian forces captured the station at the beginning of the war.

Zelensky said in his speech: "Every Russian soldier, whether he shoots at the station or shoots using the station as a cover, must understand that he becomes a special target for our intelligence agents, our special services and our army."

Zelensky, who did not elaborate, repeated the accusations against Russia that it was using the station for what he described as "nuclear blackmail."

The minister added that he had sent a similar request, through the Ministry of Foreign Affairs, to the Ukraine Contact Group, which includes countries such as the United States, Britain and Germany, which coordinate arms transfers to the Ukrainian armed forces.

The Minister stressed, in particular, the fate of Ukrainian prisoners of war in Russia, and said that they are being tortured and killed, and requested that international experts be granted access to a prison located in Olinivka, near Donetsk, where dozens of Ukrainian prisoners of war were killed in an attack in late July, Moscow and Kiev blamed each other for the attack on the Olenivka prison.

"It is the United Nations that must compel Russia to allow representatives of the Red Cross to visit the Ukrainian prisoners of war in Olinivka," he added.

In addition, Russian diplomat Mikhail Ulyanov called on the United Nations to intervene to ensure the safety of the Ukrainian Zaporizhia nuclear power plant, which has been bombed for several weeks.

"Giving the green light for the visit of experts from the International Atomic Energy Agency to the nuclear power plant is the responsibility of the United Nations Secretariat," Ulyanov said in an interview with the Russian Tass news agency published yesterday.

The Russian diplomat represents his country at international organizations in Vienna.

In this case, Ulyanov said, the International Atomic Energy Agency could make arrangements to visit the troubled region.

According to reports, the United Nations has so far not allowed the head of the International Atomic Energy Agency, Rafael Grossi, to travel to Ukraine, not only for security reasons, but because of controversy over the itinerary.

Grossi can travel under Russian protection through the Black Sea peninsula of Crimea, which Moscow annexed in 2014, but Kyiv would regard that as an "insult".

"We worked closely with the organization in May and made arrangements for the visit," Ulyanov said.

But the United Nations Secretariat prevented the visit at the last minute, without explaining the reasons.

"It is not possible to send an international team while the artillery bombardment continues," Ulyanov said.

This is the main obstacle.”

Ukraine accuses Russian forces of using the nuclear power plant as a firing bulwark against the small towns of Nikopol and Marhanys on the other side of the Dnipro reservoir.

Russia, for its part, says Ukraine is bombing the station with drones, heavy artillery and rocket launchers.