A long series of fires recalled the memory of Egyptians, after they followed up on the horrific fire in the Abu Sefein Church in the Imbaba neighborhood, west of Cairo, on Sunday morning, which left more than 40 people dead and dozens injured. 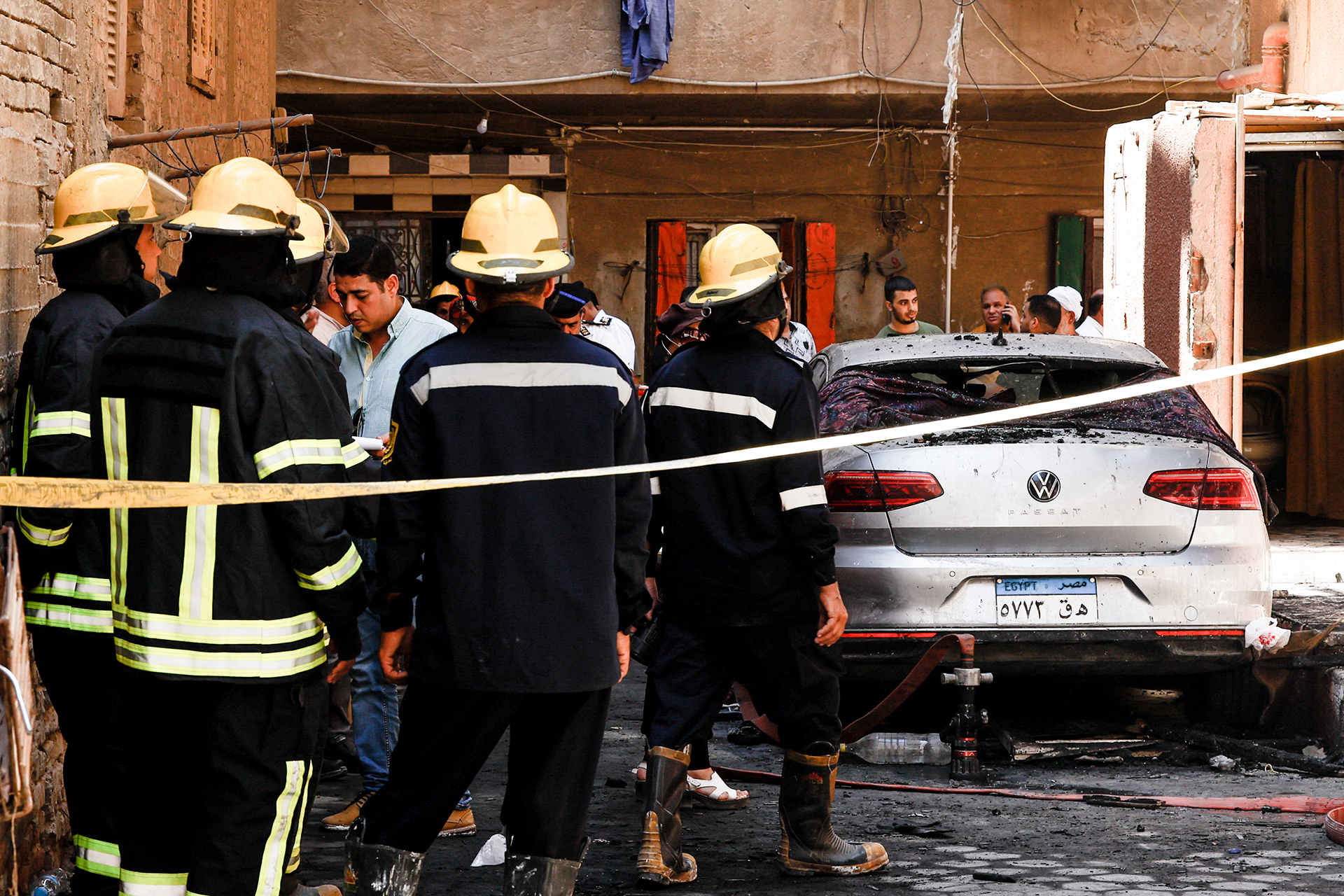 A long series of fires recalled the memory of Egyptians, after they followed up on the horrific fire in the Abu Sefein Church in the Imbaba neighborhood, west of Cairo, on Sunday morning, which resulted in 41 deaths and dozens of injuries.

Egyptian President Abdel Fattah El-Sisi announced that he is closely following the developments of the incident, and said on Facebook that he directed all relevant state agencies and institutions to take all necessary measures and provide all aspects of health care for the injured, and also made a phone call to Pope Tawadros II, Patriarch of the Coptic Orthodox Church, and offered his condolences in accident victims.

The Ministry of Interior announced - in a statement - that the examination of forensic evidence revealed that the fire broke out in the air-conditioning system on the second floor of the church building, which includes a number of classrooms, as a result of an electrical fault, which led to the emission of a dense amount of smoke that was the main cause of the fire. deaths and injuries.

The incident is a link in a long series of fire incidents in Egypt, which caused hundreds of casualties, and some of them also changed the features of entire regions.

🔴 Details of the fire #Munirah_Church.. Numbers on the sidelines of the accident pic.twitter.com/RMhz8yutBC

I am closely following the developments of the tragic accident in Al-Munira Church in Giza Governorate, and I have directed all concerned state agencies and institutions to take all necessary measures, and immediately to deal with this accident and its effects and to provide all aspects of health care for the injured.. 1/2

It was reported to the security services at about 9 am today, corresponding to the 14th of this month, that a fire occurred inside the #Abu Sefein Church in the #Munira_Gharbia area in Giza.

Train fires and hundreds of victims

In 2002, Egypt witnessed one of the worst fires in its history, the Upper Egypt train accident, which killed more than 350 people, when a fire broke out in one of the carriages of a train heading from Cairo to Aswan.

The authorities said that the fire broke out as a result of the use of gas cylinders by sellers inside the train, which led to the burning of 7 cars that were crowded with travelers for the Eid al-Adha holiday.

And what added to the ugliness of the accident was what eyewitnesses reported that the train driver did not notice the fire and kept driving it for 8 kilometers, with fires burning in his vehicles, while the passengers were jumping from windows and doors in the agricultural lands and the Ibrahimiya Canal near the railway.

The main train station in Cairo (Egypt Station) witnessed another terrible accident in February 2019, when a train tractor collided with the concrete barrier at the end of the platform, causing an explosion and a large fire.

At the time, social media reported horrific scenes of the moment of the explosion and the burning of the bodies of citizens on the station platform, amid individual attempts to extinguish the burning bodies.

Egyptian state television said at least 25 people were killed and more than 50 others were injured in the accident.

September 2005 also witnessed a major fire in the theater of the city of Beni Suef, south of the Egyptian capital, which led to the death of more than 30 people and the injury of nearly 40, after the fall of a burning candle that was used in one of the plays, and the fire spread to the carpets, curtains and decoration consisting of burlap and paper.

The rapid spread of the flames was helped by the use of highly flammable materials in theater installations.

The fire resulted in the killing of prominent artistic figures, such as the professor of drama at the International Theater Institute Mohsen Moselhi, director Bahaa Al-Mirghani, professor of criticism at the Academy of Arts Hazem Shehadeh, and professor at the same institute Medhat Abu Bakr, and others.

Likewise, the Egyptian churches were the scene of a number of fires other than the incident today, although the most prominent of them came in the form of deliberate bombings.

Although the Ministry of Interior presented the young Sayed Bilal an accusation that it said was involved in the bombing, and tortured him to death according to accusations from activists, the former Public Prosecutor Abdel Majeed Mahmoud referred a report to the Supreme State Security Prosecution in February 2011 (following the January 2011 revolution), accusing him The former Minister of Interior, Habib Al-Adly, was involved in the bombing of the Church of the Two Saints in Alexandria, before he was later released, leaving the case an unsolved mystery.

In 2016, at least 23 people were killed in an explosion inside a church in the compound of the Coptic Cathedral, the headquarters of the Coptic Orthodox Pope in Cairo.

Security officials confirmed at the time that the explosion was caused by an explosive device of "TNT" weighing 12 kilograms.

The official Egyptian Middle East News Agency reported that the explosion occurred in the prayer hall of the Petrine Church, adjacent to the entrance to the cathedral, after an unknown person threw a bomb inside the hall, causing deaths and injuries and destroying the contents of the prayer hall.

The Ministry of Health announced at the time that the reason for the high number of dead and wounded was the explosion during the prayer service inside the cathedral, and the presence of large numbers inside.

The fires of the revolution

Although there were not a large number of casualties during it, there are a number of fires that have remained burning in Egyptian history during the current century, as they are linked to important political events such as the January 2011 revolution.

The fire at the headquarters of the National Democratic Party in Cairo on the night of Friday of Anger, January 28, is one of the most famous of these fires, as the party was the arm of power and a symbol of its power and influence in Egypt over the 30 years of the rule of ousted President Mohamed Hosni Mubarak.

In the midst of clashes between demonstrators and security forces in the vicinity of Tahrir Square in December 2011, the building of the Scientific Academy, which was established in 1798, caught fire, devouring a large number of rare historical books, documents and manuscripts.

The scientific complex was one of the oldest scientific institutions in Egypt and the region, and contains about 200,000 old volumes, rare books, maps and research, including the book Description of Egypt, in which the scholars of the French campaign presented a picture of Egypt during the campaign’s existence in its land, which was one of the most prominent victims of the fire.

During the past century, Egypt witnessed a number of major fires, the most famous of which was the Cairo Fire, which broke out in January 1952 in several buildings. Within hours, the fire consumed about 700 shops, cinemas, casinos, hotels, offices and a club in the streets and squares of the city center.

It also led to the displacement of thousands of workers, according to a statement by the prosecution at the time.

On the same night as the fire, Prime Minister Mustafa al-Nahhas Pasha submitted his resignation, but the king rejected it, and the Council of Ministers met and decided to confront the situation by declaring martial law throughout the country. Gathering and considering any gathering of 5 people or more as a threat to peace and public order, whoever participates in it shall be punished by imprisonment.

The year 1971 witnessed a terrible fire that destroyed the Khedivial Opera House, the first opera house in Egypt and Africa, which was opened by Khedive Ismail in 1869 to celebrate the opening of the Suez Canal.

The flames devoured the paintings of the great photographers that adorned the walls, in addition to the scenes of the international opera and ballet that the artistic groups left for their performances on the opera stage as gifts to the Egyptian Opera House, as well as heavy losses in the artistic bands’ holdings of musical instruments and notes for symphonies.