Turkey pays for Russian gas in rubles.. who benefits?

The Turkish president and his Russian counterpart reached an agreement that Ankara would pay part of the price of natural gas to Moscow in the local Russian ruble, which some Western countries saw as a challenge to the sanctions imposed on Moscow. 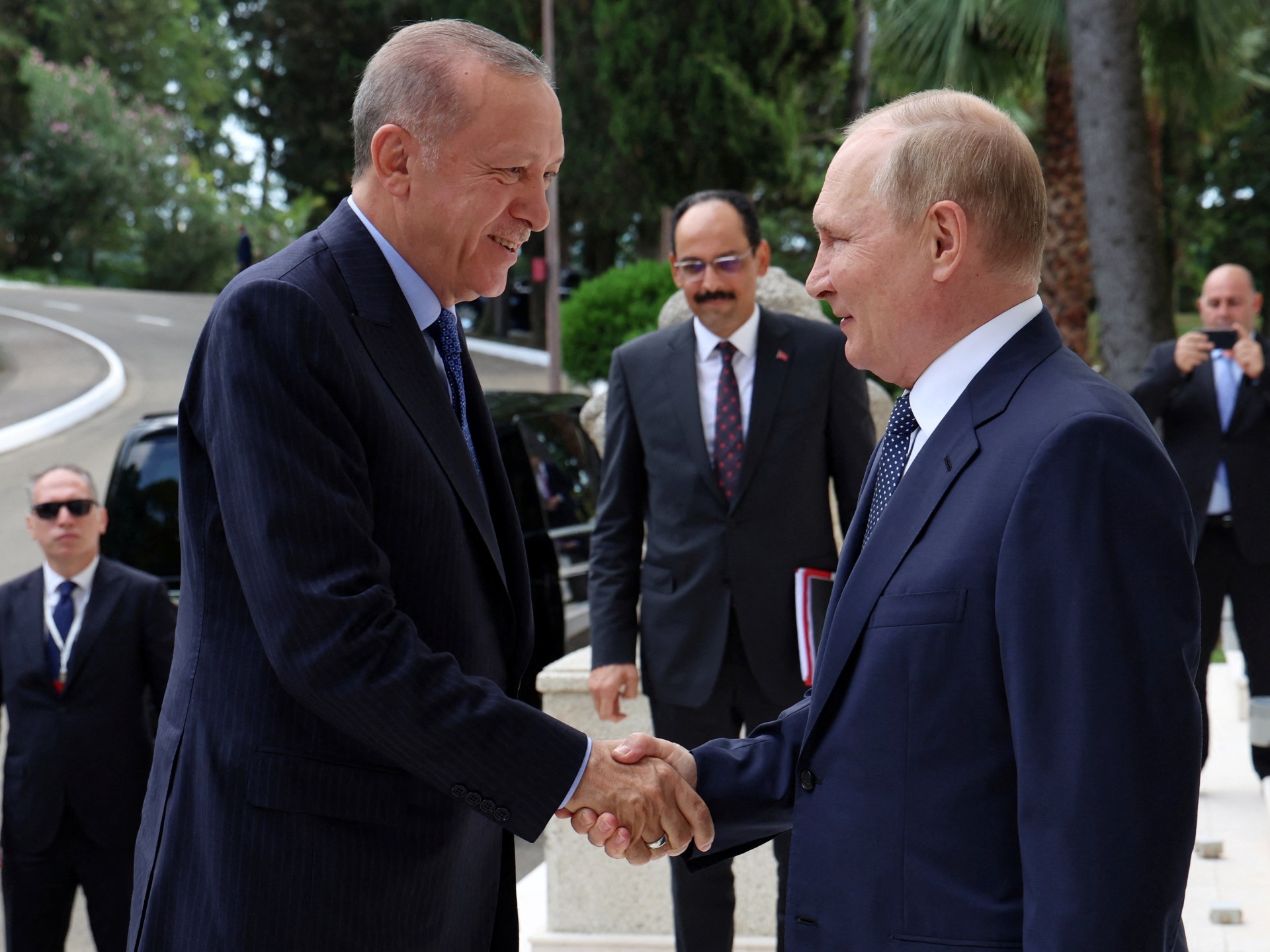 ANKARA - Turkish President Recep Tayyip Erdogan’s summit with his Russian counterpart Vladimir Putin on Friday in the Russian city of Sochi resulted in the two sides reaching an agreement under which Ankara would pay part of the price of natural gas to Moscow in the local Russian currency, the ruble, which some Western countries considered a challenge to the strict sanctions imposed on Russia

The Turkish-Russian agreement, which aims primarily to end the dominance of the dollar and the euro on trade transactions between the two countries and support the two local currencies, according to experts, comes at a time when Russia faces Western sanctions targeting its economy, banks and currency in the first place.

After the Erdogan-Putin summit, Russian Deputy Prime Minister Alexander Novak said, "We are talking about a gradual transition to national currencies, and in the first stage, part of the supplies will be paid in Russian rubles."

The Turkish expert on energy and logistics, Fatih Taghri Golo, says that Turkey and Russia have been seeking for years to get rid of the dominance of the dollar and the euro in their commercial dealings and want to make the two local currencies a major element in the trade exchanges between the public and private sectors of the two parties.

Taghri Golo added, in a statement to Al-Jazeera Net, that Turkey has been suffering from a shortage of foreign currency stocks with the Central Bank for more than a year, and that this step may contribute to alleviating the deficit in its stock, even if in a small way.

He pointed out that the most important positive results of paying for gas imported from Russia in rubles will be an increase in exports of Turkish products and goods to the Russian markets, in order to obtain the largest possible amount of the Russian currency.

He continued, "Turkey has a great opportunity to increase its exports to Russia, especially since the latter suffers from European and Western sanctions, and paying for gas in rubles would pave the way for expanding the scope of dealing in the two local currencies in the trade of goods and other products, and the idea of ​​adopting the local currency, in trade exchange operations between Russia." And Turkey, that would open new horizons in many areas, such as increasing the volume of trade exchange and promoting tourism."

He believes that Turkey is counting on Russian tourists to secure the ruble, while President Erdogan said during his return from Sochi that his country had allowed the Russian “Mir” payment system to enter some Turkish banks with the aim of enhancing remittances and financial flows between the two countries, and that there were studies to generalize this system on All public and private banks.

He considered that one of the advantages of paying part of the price of Russian gas in rubles is that it will pave the way for the signing of a currency swap agreement (SWAP) between Turkey and Russia in large amounts in the coming period, especially since the two countries have a common goal, which is to get rid of the dominance of the dollar and the euro.

For his part, economic analyst Oguz Demir, in a television interview, expressed his belief that Russia and Turkey will face difficulties in moving from the dollar to the two local currencies in the trade exchange, noting that the US dollar "is still the strongest currency in the world."

He added that Russia will benefit from this step much more than Turkey, as it is looking for a way out or an escape from Western sanctions and is trying to maintain the strength of its local currency and its position in foreign markets, pointing out in this context that Turkish banks may be subjected to similar sanctions for violating the Western sanctions packages imposed on Turkey. Russia.

Demir warned of the dangers of Turkey's link to the ruble, noting that his country's government should achieve a balance in payments in the two local currencies so that the ruble does not become a major foreign currency in the country in the future.

And he added, "We have to achieve a balance in payments in the two local currencies, and it seems difficult to achieve this because the gap between imports and exports with Russia is very large, as our exports to this country amounted to 6.5 billion dollars in 2021, while the value of imports from Russia amounted to 29 billion dollars." ".

He also expressed his fear of Turkey being exposed to Western sanctions due to the deepening of its dealings with Moscow, which is subject to severe economic sanctions, especially in the banking sector. Their dissatisfaction with the Turkish-Russian rapprochement.

Demir believed that Russia's agreement to pay Ankara part of the gas price in rubles comes within the framework of Moscow's efforts to impose its national currency in international deals in the face of the euro and the dollar, in light of unprecedented Western economic sanctions that affect it due to the war on Ukraine.

He continued, "If Turkey starts paying for gas to Russia in rubles, it will work to provide the amount to be paid from the revenues of Russian tourists and the products it exports to Moscow in rubles, and in the event that the government is unable to provide the required amount, it will either buy the Russian currency in dollars or euros, or it will You will resort to borrowing from the Russian payment system Mir, and therefore this matter will cost the state treasury additional burdens such as interest on the loan.”

In his turn, writer and analyst Cem Kucuk said in his column in the newspaper "Turkey" that the West should thank Turkey, which played a pivotal role in Moscow and Kiev reaching an agreement to export grain from Ukrainian ports to world markets and put an end to a global food crisis that was around the corner.

Kucuk considered that the statements quoted by the British Financial Times newspaper about European officials, which express the West's annoyance about Ankara's deepening of its relations with Russia, are "denial", especially since Turkey is the only country within NATO that can currently negotiate with Russia on all files, whether regarding Continuing to pump gas to Europe or on the necessity of ending the military operation against Ukraine.

In this context, Kucuk referred to the statements of Russian President Vladimir Putin during his meeting with Erdogan, when he said that "Europe should be grateful to Turkey for the uninterrupted flow of natural gas from Russia to it."

The writer criticized the European Union’s dissatisfaction with Turkey’s dealing with Russia in the local currency, pointing out that there are several European countries that agreed to Russia’s request to pay for imported gas in rubles, and added that European resentment has reasons other than the obligation to abide by Western sanctions imposed on Moscow, which is targeting Turkey, which began In recent years, it has adopted a new economic system based on reliance on local resources and the development of the production and export sectors.

In recent years, political relations have boosted the economic and trade movement between Turkey and Russia in the commodity and service sectors, which has contributed to the acceleration of the growth of the value of trade exchange between the two countries.

Through a package of agreements, the two countries are looking to raise the volume of trade exchange between them to $100 billion annually, in the coming years.

According to official figures, the volume of trade exchange between Ankara and Moscow increased last year by 57 percent, reaching $33 billion.

Turkey imports primarily energy products from Russia, especially natural gas, while it exports to this country a number of products, primarily agricultural.

Russia has implemented a group of huge projects in Turkey, most notably the Turkish Stream pipeline to transport Russian natural gas to Europe through Turkish territory.

It is also currently implementing the Akkuyu nuclear plant project and the gas truck factory, and tourism occupies an important place in the cooperation between the two countries.