A lifeguard from the concessionaire of the rescue service on the beaches of Ceuta has spotted, reached and intercepted early this Saturday afternoon one kilometer... 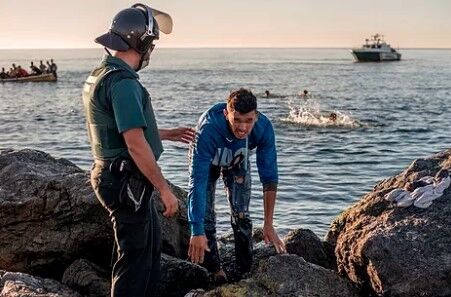 A lifeguard from the concessionaire of the rescue service on the beaches of Ceuta has seen, reached and intercepted

alone of Moroccan nationality who had launched into the sea in a small fiber boat from the breakwaters of the port with the intention of crossing the Strait of Gibraltar towards the Andalusian coast.

Sources of the service awardee have explained that their worker spotted the boat with his binoculars from Benítez beach, one of the sandbanks located on the north coast of the city, and they have encrypted the age of the minors who were propelling it with their hands and sticks.

"between six and eleven years".

Once reached aboard a jet ski, the lifeguard has alerted the Civil Guard and Maritime Rescue, which has been responsible for rescuing the young people and returning them to land in "good" health.

The boys have embarked on their aborted journey from the western jetties of the port of Ceuta, where unaccompanied foreign minors who reject the protection measures of the local administration usually take refuge, although at least part of those embarked were welcomed in the resources of those available to the Autonomous City.

The Ceuta Child Protection Service currently protects a total of 306 migrant children alone, the vast majority of Moroccan nationality, but also half a dozen countries such as the Republic of Guinea, Mali or Senegal.