It has been 75 years since Britain announced the partition of what was known as (British India), within its colonial empire, which led to the emergence of two independent states: "Hindu-majority India and Muslim-majority Pakistan". But the joy of independence was marred by the massacre of partition. marked by 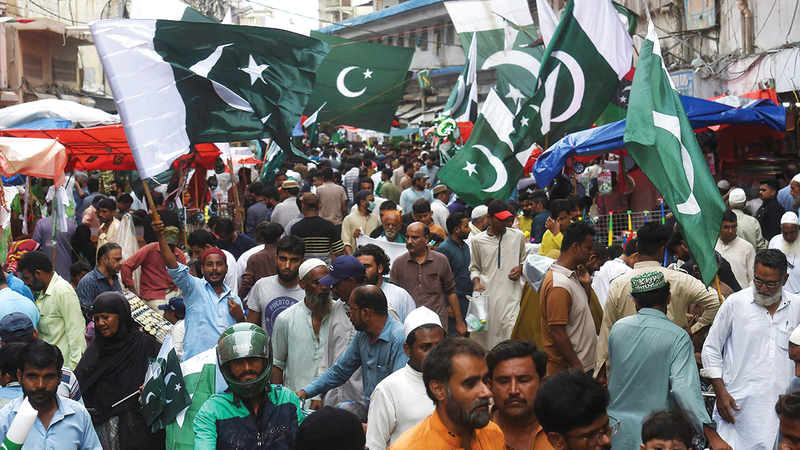 Although 75 years have passed since the two countries were divided,

It has been 75 years since Britain announced the division of what was known as (British India), into its colonial empire, which led to the emergence of two independent states:

But the joy of independence was marred by the massacre of partition.

The days following the birth of the two nations were characterized by unprecedented chaos, as hatred erupted between religious groups, millions of Muslims made their way to Pakistan, while Hindus and Sikhs left in the opposite direction.

Many suffered horrific atrocities along the way, which prevented them from ever reaching their destination.

Pritam Khan, a Muslim who lived in Ludhiana, India, barely survived when a mob invaded his village, but he lost the rest of his family.

"I was playing near the house at that time when a group of rioters stormed it," Khan, 86, said in an interview with the German news agency (dpa).

His father and older brothers managed to escape, while he hid in the cornfields and his mother hid in a well.

Later, when he went to look for her, she did not come out of the well.

Citizens lost their property due to moving from one place to another, which further fueled the unrest.

The shocks of that time remain in the collective memory even today, affecting the formation of policies and exacerbating the bitter rivalry between the two countries.

Pritam Khan does not know exactly what happened after his mother's death.

'He's shriveled on his face,' he said, 'and eventually settled down with other villagers until the violence subsided.'

Pritam grew up in an Indian village near his home and worked for a farmer, never attending school.

After about seven years of partition, his family in Pakistan found out that Pritam was still alive, after a person with a distant relationship with the family went to India to search for his missing son.

In 1983, Shahbaz Khan, his nephew, began writing letters to him and they are in contact with each other to this day.

While the Khan and other families are counting 75 years since the tragedies that divided them, the two countries celebrate their independence as a victory, with Pakistan on August 14, India the next day.

Khan will not celebrate.

He said, "He will sit outdoors on his woven bed, a traditional sleeping bed in the region called charpy, and think about the family he misses, as he often does these days."

"The events that took place at the time of partition are just as painful today, as they were," Shahbaz Khan, 54, the nephew of Pritam Khan, told the German news agency DPA, sitting under a Pakistani flag, the only thing that adorns the wall of his reception room in Faisalabad. 75 years ago.

Inequality is one of the repercussions of the partition of the region in 1947, which is considered among the most densely populated regions on earth, with more than 1.3 billion people in India, and about 220 million people in Pakistan.

India is a stable country that has advanced from its status as a developing country.

On the other hand, Pakistan is a country with a faltering economy, weak democratic structures, and complex security problems caused by extremist armed groups.

However, Pritam Khan's most wished for is to return to Pakistan, to be with his family.

But he cannot, because of the strained relations between the two countries that make it difficult for him to obtain a visa, he says.

He added that he had always been yearning to join his family, but that longing was only strengthened after he visited Pakistan in 2005 as a pilgrim, like the thousands of Sikhs who cross the border each year.

He spent two days with his now-deceased older brother and his sons.

His nephew recalls this visit and says: "I wish we hadn't let him go back to India."

Pritam Khan's Indian neighbors, who let him use their phones to make phone calls, cook for him, and bring him medicine, wish he could be reunited with his family, as they see him feeling lonely.

Although Pritam and Shahbaz do not discuss politics when they talk together, they do talk about the fact that they are victims of the frosty relations between the two countries.

"It is unfortunate that people could not even meet or visit their close relatives or offer condolences in the event of the death of a family member," Shahbaz said.

He added, "The way relations between Pakistan and India are deteriorating, I don't think they will improve in the near future, and I think the rulers don't want to solve issues, otherwise every problem can be solved," noting that it is the government's duty to reunite families.

On the other hand, Nasser Ali Dillon, a 37-year-old YouTube blogger, is working to break the barrier of communication, through his channel.

Dhillon, who has roots in the Indian Punjab, remembers how his grandfather pushed him to seek friendships on the other side of the border.

And when he did, he discovered his mission, which was to connect people who had been separated.

At first he made friends through Facebook, and then began to pay visits to Nankana Sahib, the birthplace of the founder of Sikhism, and was helped by Bhubinder Singh Lovely, a friend who later joined in his activity and in the channel that started its work on “YouTube” in 2016, and thanks to the channel, many families and individuals on both sides of the border were able to meet in person.

Dillon said, "Nothing has been achieved from the 75 years of tension between Pakistan and India, and the two countries should change their positions if progress is to be made."

• Nasir Ali Dillon, a 37-year-old YouTube blogger, works to break the barrier of communication, through his channel "Youngabi Lihar", which provides a ray of hope.

Dhillon, who has roots in the Indian Punjab, remembers how his grandfather pushed him to seek friendships on the other side of the border.