Miguel Ángel Revilla: "I ran into Felipe González at the barracks, but he didn't catch my attention. He was very skinny"

Francisco Franco at the military academy was called "the matchstick" for its small stature, thinness and broad head. Then he got to general. And his 40 years of... 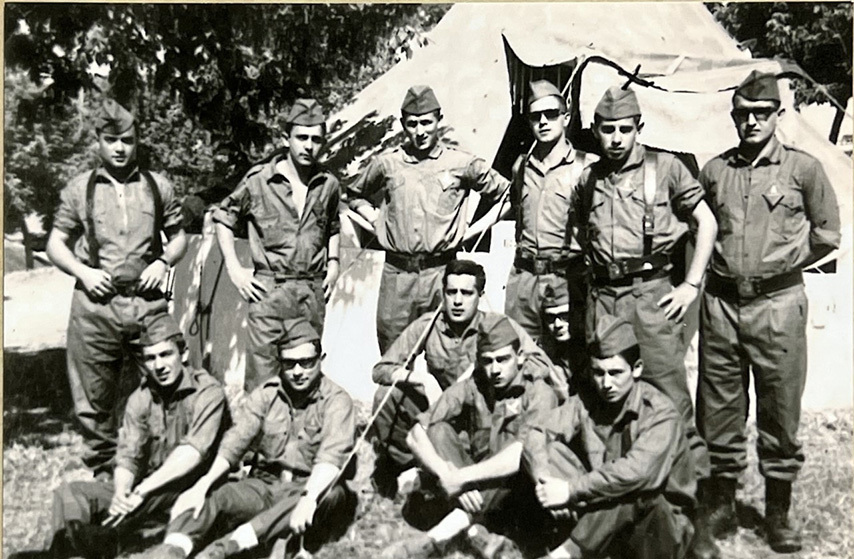 Francisco Franco at the military academy

was called "the matchstick" because of his small stature

He then he got to general.

In 1965 'the Generalissimo' continued to have a fuse

and could prohibit any diminutive attached to his name or mention of his stature.

Not so Miguel Ángel Revilla (Salceda, 1943), a young man recently graduated in Economics who at that time arrived

at the Monte la Reina military camp in Toro (Zamora).

"I had belonged to the student union

, they had me listed as a rare medium," Miguel Ángel Revilla describes to LOC.

"But I was able to join the university militias

and there I met Galician, Basque and some Cantabrian students."

During this time, the Cantabrian president was as far from accessing political office as he was from having his first dairy dessert.

"I drank my first yogurt when I was 26 years old, that's why in the military I was a chap.

In the Monte la Reina camp in 1965Cedida

Despite his little musculature throughout, Revilla soon began to

stand out in the military maneuvers of the artillery barracks.

"He was a great shooter.

and wear a six-pointed star. But I realized that

only the tall ones managed it

. Even if they didn't know how to shoot," he explains.

"The important thing was the bearing of the soldier

to wear the gala suit in the parades. The rest was useless".

"I came out sergeant, non-commissioned officer,"

Because if you eat chickpeas, chorizo ​​or bacon, you swell your gut, but not sponges. My mother sent me cans of pâté that she spread on the bread.

We ate, but it was not a balanced diet or varied

It was precisely during his compulsory military service that the founder of the Regionalist Party of Cantabria discovered Zamoran gastronomy.

"In the camp I made friends with Carlos Romero Herrera

and every Saturday he invited us to eat at his house in Fuentesaúco, which was nearby.

There I ate the best chickpea stew of my life,"

"Both of us had been unruly in college,"

he recounts about his political militancy in the middle of the regime.

A "thin" friend who "didn't catch his attention

" was always attached to him

His name was Felipe González.

The Felipe González who would be president.

"Carlos Romero belonged to a party called the Popular Liberation Front in which Pasqual Maragall was. He tried to join me, but I said no," he maintains.

"He was booked, as was I. He is now very moderate

Years after finishing the military service, Revilla read in the newspaper

that Carlos Romero had been appointed Minister of Agriculture

in the first government of Felipe González

"I ate many times with Felipe González, but he had a beard and was skinny

. Damn, he didn't catch my attention. The little boss looked like Carlos Romero, not Felipe. Look at you."

Miguel Ángel Revilla signing one of his booksGTRES

But with both Carlos Romero and Felipe González,

Revilla only coincided in the first camp.

The future general secretary of the PSOE and president of the government would become an ensign.

"I left as a sergeant, as did a still close friend of mine: Pío Echeverría"

Together with Pío, Revilla was assigned to Valencia.

"We were there for four months. I got to be a kitchen sergeant,"

However, he saw how his friend could spend the rest of his military service

without fulfilling any function due to his social status.

. He appeared with a mop of hair and a non-regulatory suit, with flared trousers. Because we had to buy the suit ourselves," he clarifies.

"But his had been made by a tailor, it was luxurious and very modern,"

"A colonel with a very strange accent was doing the instruction. I guess

he was one of those who came when Hitler lost the war,"

The German officer unsuccessfully tried to get his friend to get

rid of his hairstyle and clothes.

"I don't know what happened, but Pio picked up a phone and spoke to someone

, I guess his grandfather. The next day he showed up with the same hair and the same suit.

The rest of the camp passed him by without having any trade."

Unlike his friend, Revilla could not be a nini in the military.

We were sapper engineers,

our job was blasting and handling tanks."

president of Cantabria was destined for the kitchen.

"That's when I realized that in Valencia they didn't eat meat.

Everything was based on rice, olives, cuttlefish. I tried to introduce a different menu, but nothing," he recalls.

"They didn't drink wine either. In a bar we asked for a red wine

and they brought us beer. They had understood that we wanted a fifth."

Cantabrian diet, he had to switch to the Mediterranean diet.

Which arrived much later than the yogurts in his fridge.

Now, as president of Cantabria, he affirms that those years nourished him with values ​​and respect for the Army

: "When an officer comes I tell him: 'At your orders, Sergeant Revilla

from the artillery in the reserve appears. And I didn't become an officer because of short.'

Because bloody genetics and lack of food kept me from being an ensign."