Galicia remains with five fires in Ourense, after the extinction last night of the one in Boiro (A Coruña), while representatives of the Emergency Military Unit (UME) have attended... 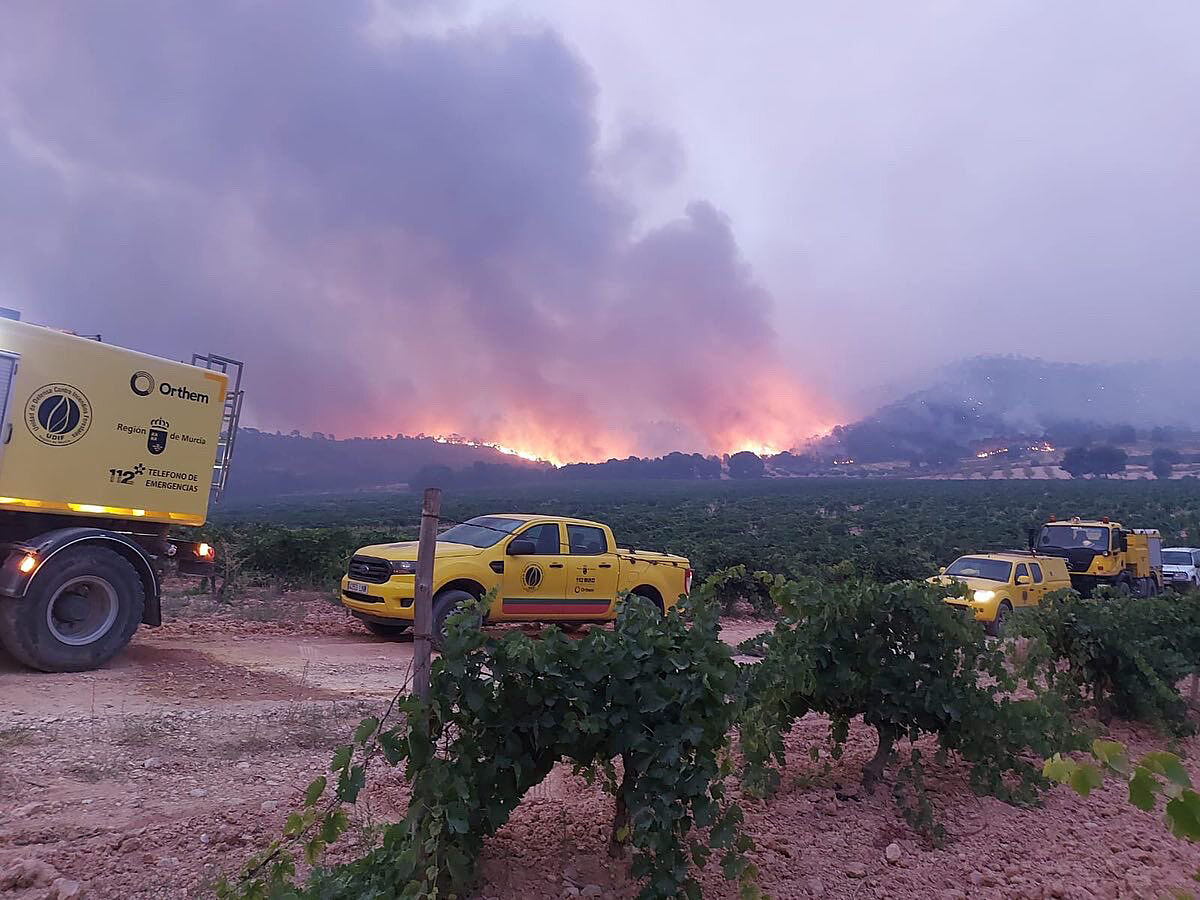 remains with five fires in Ourense, after the extinction last night of the one in Boiro (A Coruña), while representatives of the Emergency Military Unit (UME) have gone to Jumilla (Murcia) to put out a forest fire by lightning and Castilla y León has warned of extreme risk throughout the community.

In Galicia, the largest fire, with 2,100 hectares burned and active, is the one that unites the outbreaks that started in

, Camba parish, and in

The flames have been stabilized since last night in O Irixo, parish of

with 680 hectares devastated so far, and the fire is also controlled in Boborás, parish of Astureses, where 120 hectares have burned as well as the fires of San Xoán de Río, parish of Vilardá with 20 hectares, and Carballeda de Valdeorras, parish of Casaio with 440. To all this is added the extinction last night of the forest fire that affected

with 2,200 hectares burned and multiple evictions.

On the other hand, representatives of the Military Emergency Unit (UME) travel to Jumilla (in

) to participate in the work of extinguishing the forest fire declared this morning supposedly by lightning during a storm and of which three hundred hectares have been devastated by the moment in La Patoja.

"Given the difficulties in extinguishing the fire, the activation of storm nuclei with lightning strikes, the director of the Infomur Plan has requested the mobilization of the Emergency Military Unit," it is reported from 112.

In the extinction work, in addition to the aerial support of national media, nearby regions and the community, the support of private agricultural machinery is given, preventing the fire from spreading.

, with their helicopter brigades, facilitated by the community of Castilla-La Mancha, will also be incorporated into the work of extinguishing the forest fire declared in Jumilla, and which is expanding towards Castilla-La Mancha.

The Valencian Community, through the Diputación de Alicante, sends the Bell412 helicopter.

On the other hand, the Junta de Castilla y León has declared this Saturday an "urgent alert" for the extreme risk of forest fires to the entire community since the predictions of atmospheric conditions, such as the intense wind during this afternoon, indicate "a situation of high risk".

According to weather forecasts, the winds will exceed

, and up to 70 km/h in a large part of the central and eastern area, to which is added the high probability of intense storms.

The Junta de Castilla y León has lowered from 1 to 0 the level of danger of the fire that was declared eight days ago in the Avila municipality of Santa Cruz de Valle (350 inhabitants), south of Ávila, on a scale of 0 to 3 .

This decision comes a day after the regional administration considered this fire under control which, according to initial estimates, may have devastated around 1,000 hectares and which forced the evacuation of a dozen houses from the "El riding school", by Pedro Bernardo.

During Friday, 5 environmental agents, 5 fire trucks and 4 ground crews remained in the area, within an operation that came to be made up of more than half a thousand people and more than thirty aerial means from various autonomous communities and the Government central.

It also remains controlled with Level 0 in the province of Ávila, the fire that was declared on July 16 in Cebreros and that devastated more than 4,200 hectares.

As for the seven fires declared last Wednesday in

, these are still active, most of them in the review phase or stabilized by the firefighting staff, who are also working on two new fires declared in the last few hours in Tineo and Onis.

According to the Principality Emergency Service (SEPA), firefighters from Tineo and a forestry company continue to work to extinguish the fire that was reactivated on Thursday in the area of ​​La Candonosa/Muñas (Valdés), which has already been considered stabilized.

On the other hand, more than a hundred people participate in the extinction of a fire declared this midnight in the Lomas del Gamonal de Hellín area, in Albacete, and which has gone to level 1 due to the affection of non-forest assets.

This noon, 107 people and 28 means participate in the extinction tasks, five of them aerial and 23 terrestrial.

) fire, which has destroyed at least 250 hectares of scrub and pine forest, it has been controlled this morning after three days in which more than 400 people have participated in the extinction tasks.