French triple in triathlon: the rising value Léo Bergère won a first major title on Saturday and the French team monopolized the podium by concretizing its perfect plan at the European Championships… 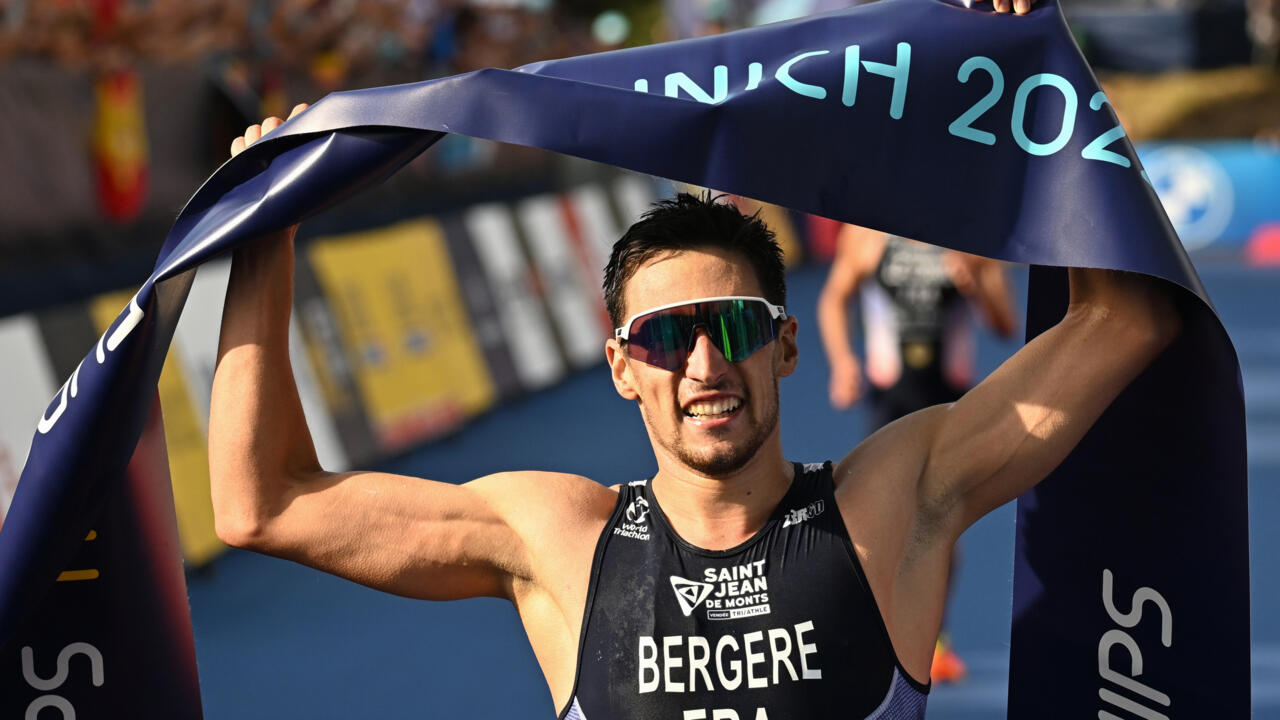 "I'm used to turning around, doing second or third. I wanted to do better", finally savors Léo Bergère.

At 26, the Isérois finally has his first major international success.

And what better memory than a Marseillaise shared with Pierre Le Corre, in silver on his right, and Dorian Coninx, in bronze on the other side.

"When we see the friends behind doing second and third, these are moments that we keep in mind for a long time", book Léo Bergère, revelation of recent months.

Missed the Tokyo Olympics (21st) like the rest of the France team individually, the one who started with cycling has since signed seven podiums in nine races on the WTCS world circuit.

"Until now I put small barriers in my head. I worked with a mental trainer", revealed the new European champion, now ready to "take the leading roles and take the lead".

What the French did by cycling in a group of twelve breakaways to trap Belgian Jelle Geens in the back before the race.

"It's a plan we had in mind with the guys since last year," explains Dorian Coninx.

"We managed to relegate the good runners to almost a minute and it paid off. We have to continue on this path. It's the strength of the collective".

"We said to ourselves in the morning at the briefing that we had a card to play", testifies Pierre Le Corre.

From the first kilometers of running, the tricolor trio made the sorting.

Léo Bergère took off two laps from the finish on a very hilly and crowded climb on the course (25,000 people announced the day before).

"There is no jealousy"

Behind Pierre Le Corre, inserted, the Hungarian Csongor Lehmann, last to accompany them, yielded in the final against Dorian Coninx.

This first victory is perhaps only a step for Léo Bergère.

Second in the WTCS standings, he has two rounds left between now and November and especially the grand final then in Abu Dhabi to try to get back on the New Zealand leader Hayden Wilde and afford a world title.

"It will allow him to attack this end of the season with full confidence", appreciates the national technical director Benjamin Maze.

Despite the absence of Briton Alex Yee, after his victory over Wilde at the Commonwealth Games at the end of July, Léo Bergère asserts himself as one of the best in the world in this Olympic format (1,500 m swimming, 40 km cycling and 10 km of running).

And France as one of the best nations with this unprecedented treble for thirty years in Europe.

All without the double world champion (2019, 2020) Vincent Luis, who is saving himself for the end of the season after a tachycardia in the race in the spring.

After the bronze medal of the young Emma Lombardi (20 years old) on Friday, gold in the mixed relay seems promised on Sunday to the Blues, bronze medalists at the Tokyo Olympics with another half of the team.

"We know that we are the ultra favorites", assumes Benjamin Maze.

"We want to add a title to our collection".