[World Report] China in the 21st century, Japan 146 years ago… What they call 'autonomy'

Just like the proverb says that shrimp will burst in a whale fight, there is no quiet day due to the supremacy between the US and China these days. In particular, as the United States, which is trying to prevent China's expansion, clashes violently in Northeast Asia, or the Indo-Pacific region in their term, the difficulties of neighboring countries are not limited. 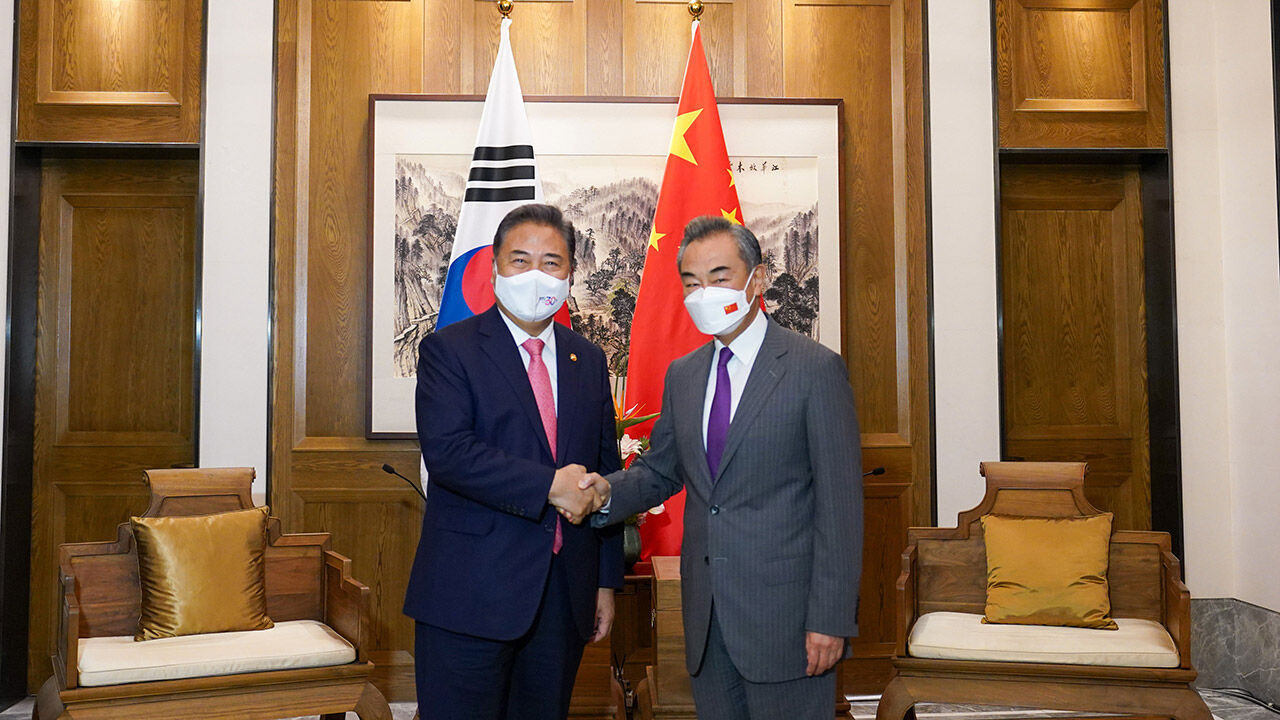 Just like the proverb says that shrimp will burst in a whale fight, there is no quiet day due to the supremacy between the US and China these days.

In particular, as the United States, which is trying to prevent China's expansion, clashes violently in Northeast Asia, or the Indo-Pacific region in their term, the difficulties of neighboring countries are not limited.

Narrowing down to our country, the issue of 'THAAD deployment' is by far the hottest topic in the security field.

Although there is controversy over how effectively THAAD can block the North Korean ballistic missile threat, the general consensus is that it does not seriously infringe on China's security interests as China claims.

The key is whether THAAD's AN/TPY-2 radar is used for detection in China.

A serious misunderstanding of the THAAD radar

It was an opportunity to explain our position on the US-promoted semiconductor supply chain dialogue, the so-called 'Chip 4', but the THAAD issue was not left out.

Apart from the release of a press release as a result of the South Korea-China ministerial meeting, you can see how much China is emphasizing this aspect by just looking at the publication of a separate material containing the discussion on THAAD.

In China's data, mentions such as 'emphasis on security concerns' and 'appropriate handling' regarding THAAD were indicated as subjects of the foreign ministers of both countries, but there was no such content in our explanation.

The Ministry of Foreign Affairs and Trade said that the foreign ministers of the two countries "exchanged in-depth views and expressed their respective positions" on the THAAD issue, "(the two sides) put great importance on each other's security concerns and strive to deal with them appropriately, so as not to become a stumbling block affecting bilateral relations. “I realized that I had to do it,” he said.

An official from the Ministry of Foreign Affairs also introduced the results of the talks and said, "Basically, both the foreign ministers of both countries have deeply and clearly expressed their respective positions on THAAD." We clearly agreed that this shouldn't be the case. That's the key," he added.

China's 'emphasis on security concerns' refers to respect for China's raising of a problem that the USFK's THAAD radar can detect China's strategic trends, and 'appropriate handling' is the so-called 'three dollars' of THAAD, that is, additional deployment of THAAD. It is interpreted as a request for a ban, the absence of the US missile defense system, and the absence of the South Korea-U.S.-Japan military alliance.

In addition, China is demanding to restrict the operation of THAAD deployed in Seongju, North Gyeongsang Province, with a 'one-han (限)' policy.

China's reaction was not as big as expected

If we summarize the results of the THAAD-related foreign ministers' meeting, it can be summarized as follows: ① The two countries have clearly clarified their positions on THAAD ② Nevertheless, the THAAD issue should not become an obstacle to the development of Korea-China relations.

What stands out is that China did not back down, saying that it decided to participate in 'Chip 4', which China was opposed to, and that the deployment of THAAD was based on the national interest, but the opposition from China is not as big as expected.

This is the content posted by the Chinese Ministry of Foreign Affairs after the meeting.

During a meeting with Foreign Minister Park Jin on August 9, 2022, Wang Yi, State Councilor and Foreign Minister, exchanged in-depth opinions on the THAAD (High Altitude Area Defense System) issue and emphasized each other's security concerns. He said that he should make an effort to take good care not to become an obstacle in the relationship.

The atmosphere at the time when the South Korean government reached an agreement on 'sealing THAAD' with China in October 2017, thanks to the active efforts of the government, was much more amicable.

This is the result of the consultation announced by the Ministry of Foreign Affairs at the time.

<Results of bilateral consultations on improvement of Korea-China relations>

Recently, South Korea and China conducted communication between diplomatic authorities regarding issues on the Korean Peninsula, including consultations between Gwan-pyo Nam, 2nd Deputy Director of the National Security Office of the Republic of Korea and Xuan-yu Kong, Deputy Minister of Foreign Affairs of the People's Republic of China.

To this end, the two sides agreed to further strengthen strategic communication and cooperation.

The ROK side recognized China's position and concerns regarding the THAAD issue, and made it clear that the THAAD system deployed in Korea does not target third countries according to its original purpose of deployment, and does not harm China's strategic security interests.

The Chinese side reaffirmed that they oppose the THAAD system deployed in South Korea to protect national security.

At the same time, the Chinese side took note of the position expressed by the ROK side and hoped that the ROK side would deal with the issue appropriately.

The two sides agreed to communicate through channels between military authorities on THAAD-related issues that China is concerned about.

The Chinese side has expressed the Chinese government's position and concerns regarding the establishment of MD, additional deployment of THAAD, and military cooperation between the US and Japan.

The South Korean side re-explained the position that the Korean government has publicly revealed.

The two sides attach great importance to the ROK-China relationship and agreed to advance the development of the ROK-China strategic cooperative partnership in accordance with the spirit of the joint documents between the two sides.

Both sides agreed that strengthening exchanges and cooperation between Korea and China would serve the common interests of both sides, and agreed to promptly restore exchange and cooperation in all fields to a normal development trajectory.

"The two sides agreed to communicate through the channel between the military authorities on the THAAD-related issue that the Chinese side is concerned about."

It can be said that the content is a little different, but it doesn't look different in the big picture.

After this announcement, the ROK side said that the THAAD issue was 'sealed' and expected sanctions relief, but China's state-run English-language media Global Times said, "The two sides agree that strengthening exchanges and cooperation between Korea and China is in the common interests of both sides, and exchange and cooperation in all fields. has decided to restore the country to its normal development trajectory as soon as possible."

And in reality, China's sanctions haven't changed much.

In the recent situation in which the struggle for supremacy between the US and China in all aspects, including security and economy, has become more intense, it may be that there is a sense of crisis that if excessive pressure on Korea, which sits under China's chin, could cause it to turn completely toward the US.

In any case, in the end, China didn't change much when we worked hard, or when we made our voices relatively louder.

Of course, the complicated function of competition between the US and China deserves a closer look.

China's intentions can be seen in an editorial published by the Chinese state-run media ahead of the Korea-China foreign ministers' meeting.

On the 9th, China's Global Times and its English version, the Global Times, published an editorial titled 'If Korea maintains independent and independent diplomacy, it will naturally receive respect'.

The editorial criticized President Yoon Seok-yeol's failure to meet with US House Speaker Nancy Pelosi, saying, "Chinese society regards Korea's independent and independent diplomacy and rationality toward China, especially in stark contrast to that of Japan." “As a result, Korea has been recognized and respected by Chinese society,” he wrote.

With the word 'frequently', Korea demanded a certain distance between the United States, but something came to mind at this point.

The Treaty of Ganghwa Island signed by Joseon with Japan in 1876 begins with 'Article 1 Joseon is a sovereign country and has equal rights with Japan'.

Of course, the term 'jaju' used at this time was intentionally used by the Japanese Empire to deny the Qing dynasty's suzerainty.

Since the United States cannot be our suzerainty, it does not fit with the current situation.

However, the basic context seems to be the same, whether Japan used the term 'jaju' to separate Joseon from the Qing Dynasty or China was wary of the US and the ROK becoming closer with the word 'jaju'.

Whether it was 146 years ago or now, the fact that our country is between great powers and is forced to choose between them has not changed.

(Photo = provided by the Ministry of Foreign Affairs, Yonhap News)