Peace in Chad.. Emir of Qatar: The Doha Agreement is a first step for reconciliation, and Deby is preparing it as a prelude to the elections

The Emir of the State of Qatar, Sheikh Tamim bin Hamad Al Thani, said that the Doha Peace Agreement is a first step for comprehensive national reconciliation in Chad, while the head of the Military Council thanked Qatar for hosting the Chadian peace negotiations. 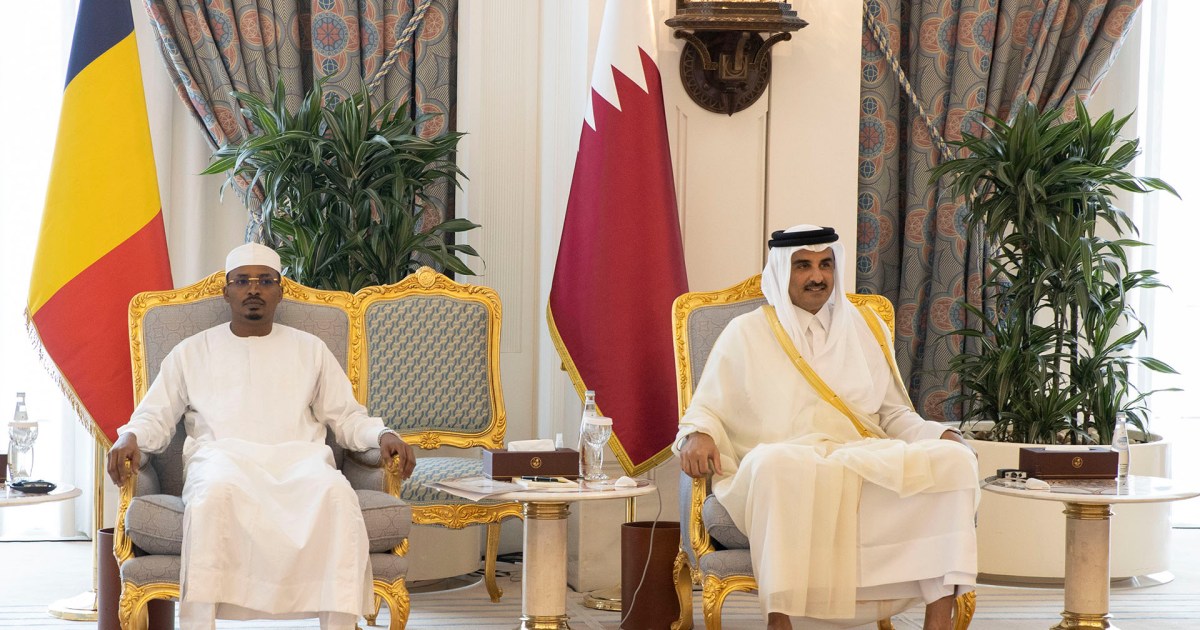 The Emir of the State of Qatar, Sheikh Tamim bin Hamad Al Thani, said today, Monday, that the Doha Peace Agreement is a first step that paves the way for a dialogue for comprehensive national reconciliation in Chad, while the head of the Military Council, Mohamed Idriss Deby, expressed his thanks to the Emir of Qatar for hosting the Chadian peace negotiations. .

This came during a meeting with the Emir of Qatar, at the Amiri Diwan in Doha, with Chad's Transitional Military Council Chairman Mohamed Idriss Deby and representatives of the opposition, on the occasion of their signing of the Doha Peace Agreement in Chad.

The Emir of Qatar thanked the government and the opposition parties in Chad for their keenness on reconciliation and giving priority to the general national interest, calling on all parties in Chad to join this agreement to achieve stability and security in their country.

The head of the Military Council, Mohamed Idris, also expressed his thanks to the Emir of Qatar for Doha's embrace of the Chadian peace negotiations, and its keenness to maintain security and peace in his country and the world.

Deby had said the dialogue was a first step towards planning long-awaited elections.

For his part, Sheikh Mohammed bin Abdul Rahman Al Thani, Deputy Prime Minister and Minister of Foreign Affairs of Qatar, stressed that Doha will spare no effort to ensure the preservation of peace in Chad.

"We strongly look forward to the peace agreement being a turning point on the path to stability in the country," the Qatari foreign minister added.

He expressed his hope that "the rest of the other Chadian groups will join the path of peace to achieve the aspirations of the people."

Sheikh Mohammed bin Abdul Rahman Al Thani called on "countries that are still experiencing conflicts to open up to initiatives aimed at laying the foundations for peace."

Earlier on Monday, the transitional authorities in Chad and opposition groups in Doha signed a peace agreement under the auspices of Qatar, paving the way for a comprehensive national reconciliation dialogue to be held in Chad later this August.

Among the most prominent provisions of the Doha Peace Agreement in Chad;

Declaration of a comprehensive cease-fire between the Transitional Military Council and the political and military movements.

The agreement also affirmed the commitment of the signatories not to carry out any hostile or retaliatory act on an ethnic or political basis.

And in the Doha Peace Agreement in Chad, the parties agreed to establish a national committee tasked with implementing a program for disarmament, demobilization and reintegration of the armed forces.

Internationally, United Nations Secretary-General Antonio Guterres welcomed today, Monday, the Chadian parties' signing of a "peace agreement" in Doha, considering the move an important moment for the Chadian people and a major turning point in its history.

Guterres said in a video message sent by the Secretary-General to the participants in the signing ceremony, "I thank the State of Qatar for hosting the Doha Dialogue that culminated in this agreement, and most of all I want to commend the Chadian parties, the transitional authorities and political-military groups, for their efforts in seeking to achieve Peace, which is bearing fruit today."

But he stressed the need for the dialogue to be "inclusive" for all parties to be successful.

The signing of the Doha Peace Agreement comes after talks in Qatar that extended since last March between the two sides, in the presence of representatives of the African Union and a number of regional and international organizations.

On April 20 of last year, the Chadian army announced the death of the country's president, Idriss Deby, 68, as a result of injuries he sustained while inspecting its forces in the north, where armed men are launching an attack to topple his ruling regime since 1990.

Deby died hours after announcing that he had officially won a sixth term in a presidential election held on April 11 last year.

After his death, a transitional military council was formed, headed by his son Muhammad (37 years), to lead the country for a period of 18 months, followed by elections.

In addition to establishing a Ministry of National Reconciliation, Déby appointed an advisor for reconciliation and dialogue at the Presidency of the Republic, and called on all parties - including armed movements and rebel groups - to participate in the national dialogue.