“As a result of mass losses and desertion of mercenaries”: the RF Ministry of Defense announced the loss of combat capability of the national battalion of the Armed Forces of Ukraine “Kraken”

Pinpoint strikes by the Russian Aerospace Forces and missile troops hit the temporary deployment points of Ukrainian nationalists in the Kharkiv direction, the Russian Defense Ministry said. It is noted that the national formation "Kraken" lost its combat capability as a result of mass losses and desertion of mercenaries. Along with this, the defense department drew public attention to the "new act of nuclear terrorism" committed by the regime of Vladimir Zelensky. We are talking about the strikes of the Armed Forces of Ukraine on objects on the territory of the Zaporizhzhya NPP. As noted in the Kremlin, the shelling of a nuclear power plant "may threaten with catastrophic consequences for a vast territory, including the territory of Europe." 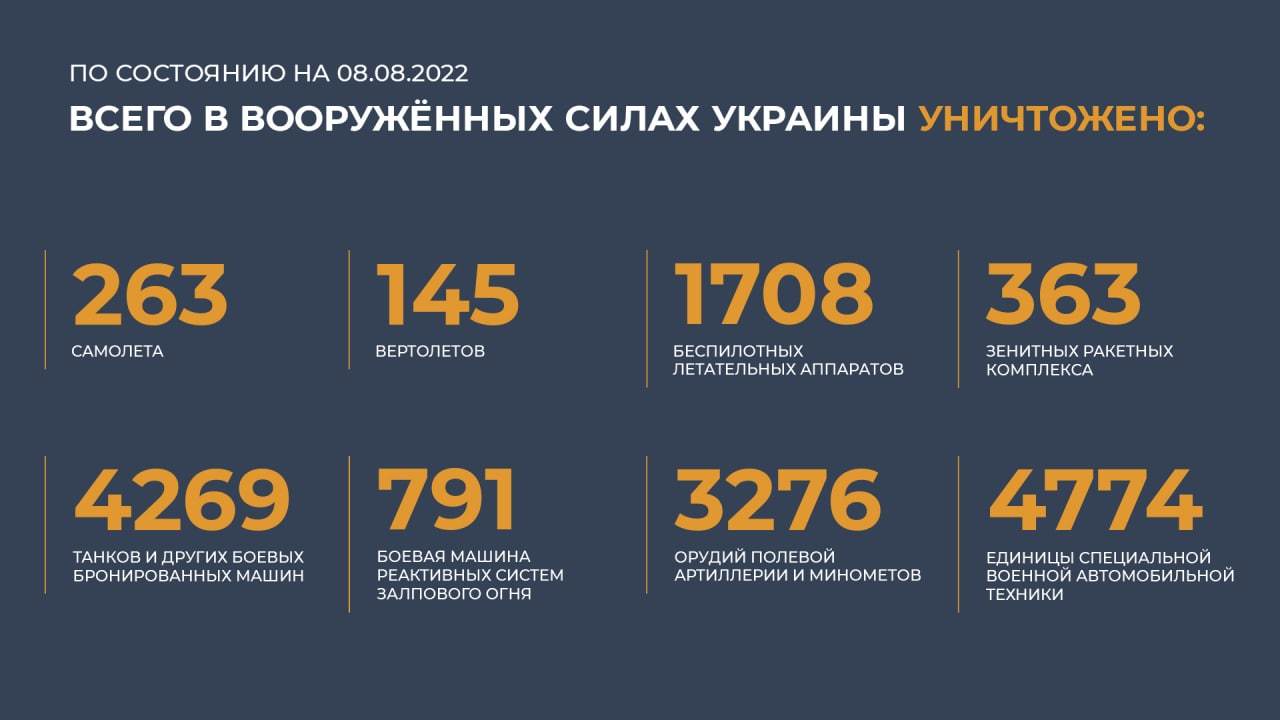 Up to 150 servicemen and 14 vehicles and armored vehicles were killed as a result of strikes by high-precision air-launched missiles on the points of temporary deployment of the battalion of the 92nd mechanized brigade and the 122nd battalion of the 113th territorial defense brigade of the Armed Forces of Ukraine near Kharkiv, said the official representative of the Russian Defense Ministry Igor Konashenkov.

During the strikes of the Russian Aerospace Forces on the positions of the 105th and 106th battalions of the 63rd mechanized brigade of the Armed Forces of Ukraine, up to 70 nationalists and 14 vehicles were eliminated, as well as up to 30 military personnel and five vehicles of the 18th battalion of the 35th marines brigade APU.

“In the Kharkiv direction, as a result of the destruction of points of temporary deployment of Ukrainian nationalists by pinpoint strikes of the Russian Aerospace Forces and missile forces, mass losses and desertion of mercenaries, the Kraken national formation lost its combat capability.

To urgently make up for losses, the commanders of the Nazi formation are unsuccessfully trying to force the inhabitants of the city of Kharkov to join it, ”added the official representative of the Russian Defense Ministry.

"The Zelensky regime has committed a new act of nuclear terrorism"

The shelling of the Zaporozhye nuclear power plant by Ukrainian armed groups is an act of nuclear terrorism by the regime of Vladimir Zelensky, the Russian Defense Ministry said.

“On August 7, the Zelensky regime committed a new act of nuclear terrorism at the energy infrastructure facilities of the Zaporozhye NPP to create a humanitarian catastrophe in the Kherson and Zaporozhye regions.

At about 12:40 a.m., Ukrainian units of the 44th artillery brigade from the area of ​​​​the settlement of Marganets, on the opposite bank of the Kakhovka reservoir, shelled the Zaporozhye nuclear power plant, ”said Igor Konashenkov, official representative of the Russian Defense Ministry.

As a result of shelling by the Armed Forces of Ukraine, the Kakhovskaya high-voltage line was damaged, which provides electricity to the Zaporozhye and Kherson regions.

In addition, there was a power surge at the ZNPP, which caused smoke on the open switchgear of the station.

To prevent disruption of the operation of the nuclear power plant by the station’s technical staff, the power of the 5th and 6th power units was reduced to 500 MW,” he explained.

The Russian Ministry of Defense, in turn, warned that these strikes could lead to a catastrophe that would surpass the tragedies in Chernobyl and Fukushima.

The press secretary of the President of Russia Dmitry Peskov also pointed out the potential danger of such actions by the Armed Forces of Ukraine.

He stressed that the shelling of the ZNPP "could threaten with catastrophic consequences for a vast territory, including the territory of Europe."

“We expect those countries that have absolute influence on the Ukrainian leadership to use this influence to prevent the continuation of such shelling,” he stressed.