“Such a person would not be released just like that”: Ukrainian Armed Forces shelled Donetsk during farewell to DPR Colonel Olga Kachura

The Armed Forces of Ukraine shelled the center of Donetsk on the day of farewell to DPR Colonel Olga Kachura. The People's Militia of the Donetsk People's Republic told RT that the Ukrainian formations purposefully attacked the theater, where they said goodbye to Kachura. According to preliminary data, as a result of the shelling of the center of Donetsk, five people were killed. 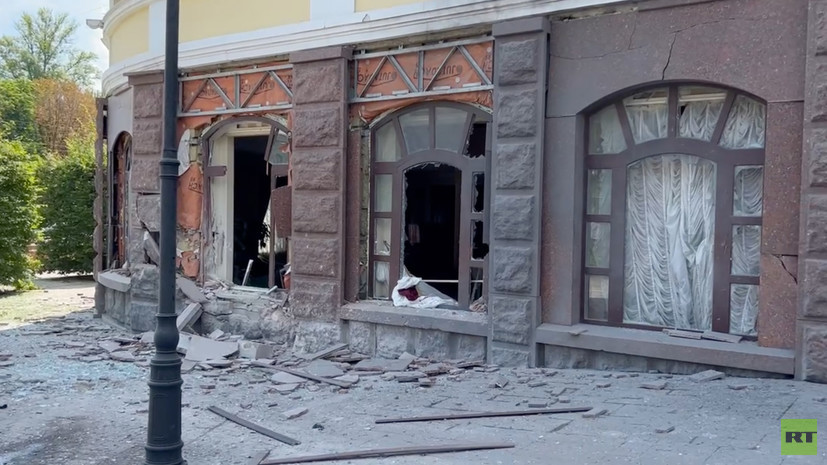 On the day of farewell to DPR Colonel Olga Kachura, the Armed Forces of Ukraine fired at the center of Donetsk.

The People's Militia of the DPR told RT that the attack of the Armed Forces of Ukraine was carried out purposefully at the theater, where the farewell to Kachura was to take place.

The Donbass Palace Hotel, where, as a rule, only journalists stay, was also under fire.

According to the headquarters of the territorial defense of the DPR, as a result of the shelling of the Voroshilovsky district of Donetsk, where the drama theater is located, five people were killed and six more were injured.

According to the DPR representative office at the Joint Center for Control and Coordination of the Ceasefire (JCCC), at about 10:30 a.m., the Voroshilovsky district of the DPR capital was shelled twice with a difference of eight minutes.

A total of five 155 mm rounds were fired.

At 11:52 a.m., the DPR reported new shelling of the Voroshilov region: three shells of 155 mm caliber were fired.

RT correspondent Andrei Yashchenko, who was in a hotel in the center of Donetsk at the time of the shelling, said that the group intended to leave for the shooting and put on equipment.

After the shelling began, the hotel staff began to urge people to go inside the premises.

“Then a woman passed by.

She did not enter, and literally in a second there was a new arrival right next to her.

She was still alive for some time, but then she died, ”said the journalist.

According to him, Alexei Dokuchaev, the operator's assistant, was also injured during the shelling.

He was closer to the epicenter.

He has a suspected concussion.

“He has a loss of coordination and began to have a severe headache.

Therefore, we called the doctors, and now the hospital staff is examining him, ”Yashchenko said.

According to RIA Novosti, the Donetsk Drama Theater area was shelled for the first time in all eight years of the armed conflict in southeastern Ukraine.

Tatyana Butrina, chief humanitarian aid coordinator for the People's Militia of the DPR, told RT that shelling from Ukrainian troops was to be expected.

“I was at a farewell.

Such a person would simply not be let go by the “dill”, even to say goodbye.

There was no such shelling with a single dead commander as today,” Butrina said.

“It was very dangerous.

They didn’t let anyone out, they offered people to go to the shelter, ”she specified.

Note that in the summer of 2022, the RT group visited the Korsa division and talked with its commander.

According to Kachura, her main dream was victory and peace in the Donbass.

For the past eight years, residents of Donetsk have been waiting for a resolution to the conflict, she noted.

Also on russian.rt.com “A black day for Gorlovka and the republic”: Olga Kachura, commander of a rocket artillery battalion, died in the DPR

After the war, she intended to retire on a seniority basis, engage in animal husbandry and raise her grandchildren.

On the afternoon of August 3, it became known about her death.

An RT source in the power structures of the DPR said that the car in which Korsa was located came under fire from Ukrainian artillery.

They tried to save the woman, but she died on the way to the hospital in Yasinovataya.

Hero of Russia and Hero of the DPR

“For courage and heroism shown in the performance of military duty, award the title of Hero of the Russian Federation to Colonel Olga Sergeevna Kachura (posthumously),” the text of the decree says.

Earlier, the head of the DPR, Denis Pushilin, awarded Kachura the title of Hero of the DPR.

As stated in the relevant decree, the title was awarded "for services to the DPR and its people associated with the accomplishment of a heroic deed, courage and bravery shown in the battles to protect the Donetsk People's Republic."