International efforts continue to extend the armistice in Yemen 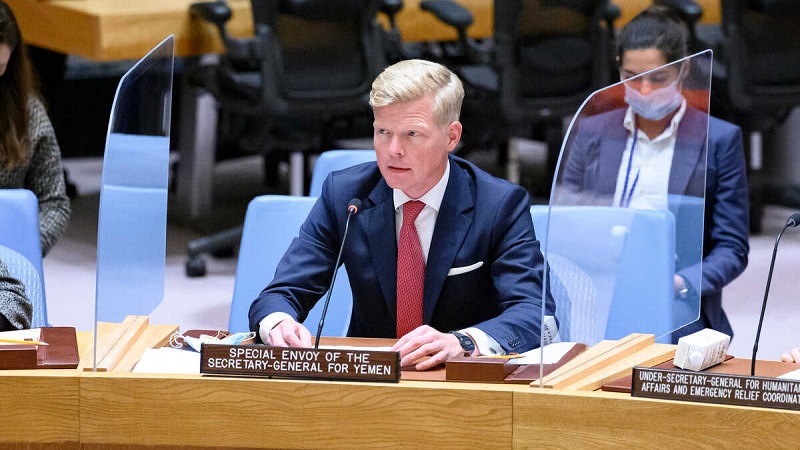 International efforts continue to extend the armistice in Yemen

International and UN efforts to extend the armistice in Yemen continued, with the end of the second period of its extension in early August.

Yemeni sources spoke about the visit of the UN envoy to Yemen, Hans Grundberg, to Aden as part of his new efforts to extend the truce, which the Houthi militia refuses to extend, while the Yemeni government sets conditions for that.

The expected visit of the UN envoy comes in conjunction with the visit of the French ambassador to Yemen, Jean-Marie Safa, to Aden, and his meeting with the leadership of the Presidential Leadership Council and officials in the Yemeni government to discuss peace efforts in Yemen.

The expected visit also comes as the military advisor to the UN envoy and Chairman of the Coordination Committee for Military Affairs, General Anthony Hayward, continues his meeting with the Yemeni government side, to implement what was agreed upon regarding the formation of military monitoring committees in the seam areas, in light of the continued attacks and violations of the truce by the Houthi militia, as well as monitoring Military movements and combat operations along the roads that were agreed to open in Taiz and other governorates.

The US State Department had announced a new tour of its Special Envoy to Yemen, Tim Lenderking, to the region, to continue US diplomatic efforts in support of efforts to extend the armistice in Yemen, in close coordination with the United Nations Special Envoy, regional and Yemeni partners, as well as US diplomatic efforts to help advance the truce. The wheel of peace.

The Yemeni sources expected that the international and international efforts would focus on extending and expanding the paths of the peace process in Yemen, if the truce was extended for another six months, and put pressure on the Houthis to implement the terms of the truce, open roads in Taiz and other Yemeni governorates, stop violations, and choose peace as an approach to the stage. coming.

The sources also expected the committees formed by the two sides to resume their meetings soon, to discuss the release of 2,223 prisoners and detainees of the two sides.

The Yemeni Presidential Leadership Council had affirmed the council's support for the efforts of the international community to bring peace and stability to Yemen, and its commitment to a comprehensive and sustainable solution in accordance with national and regional references, and relevant international resolutions, especially Resolution 2216.

The Council stressed the importance of exerting more international pressure on the Houthi militias to fulfill their commitments before the international community.

The Council noted that the Houthi militia is exploiting the truce and preparing for a more bloody round of abuse and violence, calling on the United Nations and the international community to assume its responsibilities in this regard.

The Yemeni government demands the implementation of the terms of the armistice, especially the opening of roads, the payment of salaries, and a halt to the violations and escalation that the militias practice on a daily basis on the fighting fronts, so that the extension of the armistice for a new period is approved.

In Taiz, hundreds of the city's residents demonstrated their refusal to extend the truce, in light of the continued Houthi siege of the city and the militias' failure to implement their commitments regarding opening the main roads, stopping their violations and bombing civilians.

The media center of the Yemeni army announced that 228 Houthi violations of the armistice had been recorded during the past hours, on the fronts of Hodeidah, Taiz, Abyan, Al-Dhalea, Hajjah, Saada, Al-Jawf and Marib, which led to the killing and wounding of 18 Yemeni soldiers.

The center indicated that the Yemeni army and the resistance forces were able to thwart four infiltration attempts by the Houthi militia on the fronts west of Hajjah and east of Abyan.

In Ibb, four Houthi militants were killed and two others were wounded in clashes with the residents of the village of "Al-Nahwi" in the isolation of "Al-Arabyin" in the south of the governorate, against the background of a Houthi raid on the village.