Wimbledon: Nadal and Djokovic en route to a 60th duel

Will two unexpected semi-finals lead to a new episode of the most recurring duel on the circuit? Friday at Wimbledon, three-time defending champion Novak Djokovic faces Britain's Camrone... 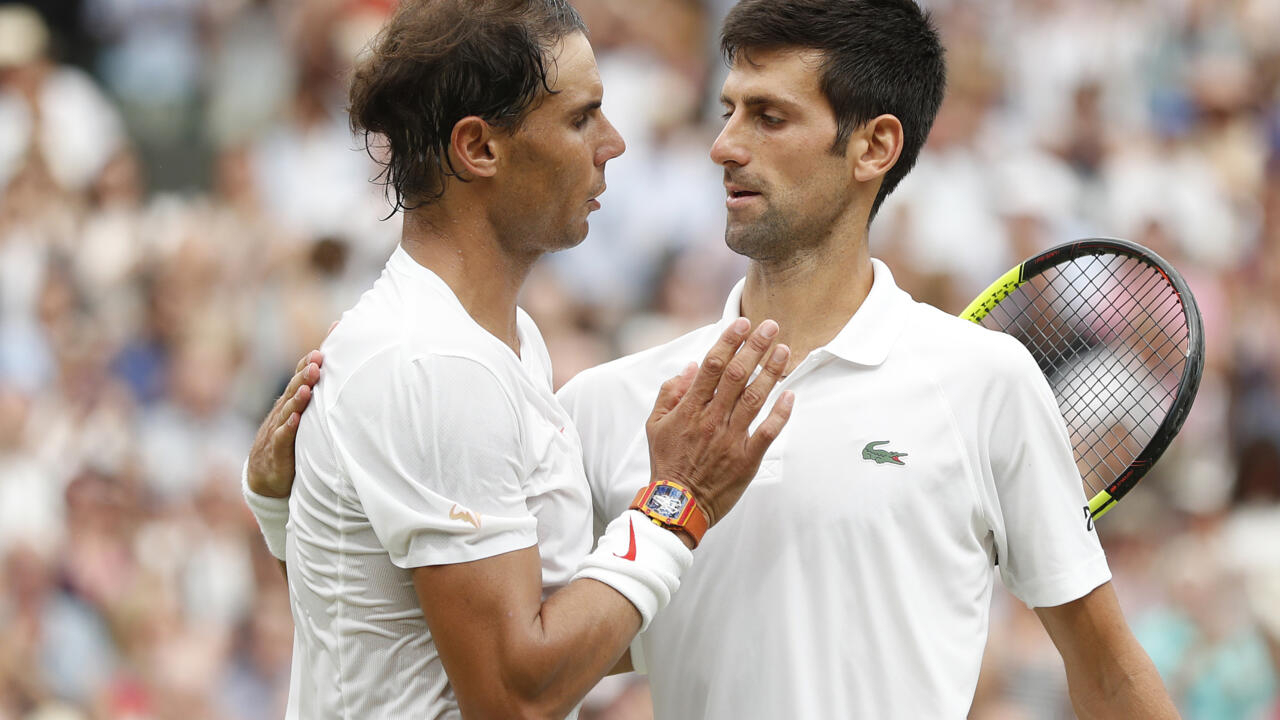 Djokovic, looking for a seventh success on the London lawn (the fourth in a row), and Nadal, double winner, have faced each other 59 times.

The Serb has a slim advantage with 30 successes, but he remains on a defeat in the quarterfinals at Roland-Garros.

Nadal and the double threat

For Nadal, Kyrgios is "a nightmare", according to Mats Wilander, a seven-time Grand Slam winner and now a commentator on Eurosport, because of his game and even more so his attitude totally opposed to the Spaniard's ethics.

But an additional difficulty threatens Nadal: the abdominal pain that led him to the brink of abandonment in the quarter-finals.

"I don't know," replied the world No.4 when asked on Wednesday night if he would be able to face Kyrgios.

He explained that he did not want to be more specific so as not to be called a "liar" if the results of the exams scheduled for Thursday contradicted his statements.

Anyway, he pointed out that the reason he didn't throw in the towel in the quarterfinals against Taylor Fritz - when his abs were torturing him - is that at 36, he "hates to give up" .

But by his own admission if he is not "100%" physically to play against Kyrgios - "a very great player on all surfaces, especially on grass" - he does not give much of his chances to qualify for a sixth final at Wimbledon.

Especially since the Australian, after a backfiring start which culminated in his third round against Stefanos Tsitsipas who saw in his opponent a "big guy" with a "demonic side", regained control of his nerves to avoid more -or almost more-, to express themselves only through their tennis, which is often brilliant.

"I'm probably playing my best tennis and I feel mentally very well," said the 40th in the world after a victory against Cristian Garin on Wednesday which opened the doors to his first Grand Slam semi-final, eight years after his first quarter. at Wimbledon.

At the time, unknown, he had received an invitation and had beaten Nadal in the 8th before failing at the gates of the semis.

"Twice, we fought a total fight on the Center Court. He won one and I won one", recalls the Australian.

"It's a match that makes the mouth water for the whole world. It will probably be the most watched match in history!", He estimated.

Djokovic facing Norrie and the public

The public is rarely behind Djokovic.

Friday, it will be even less since the triple defending champion faces Cameron Norrie (12th) and the Center Court had not had the opportunity to see one of his in the semis since Andy Murray in 2016, when the Briton then won his second title on this grass.

"I know what to expect, says the Serb with 20 Grand Slam titles. He doesn't have much to lose and every victory from now on has great value for him. But I know his game well."

Briton Cameron Norrie celebrates his victory over Belgian David Goffin in the quarter-finals of Wimbledon on July 5, 2022 in London Glyn KIRK AFP/Archives

For Djokovic, who fell two points behind Nadal in the race for Grand Slam titles (22 for the Spaniard after his victories at the Australian Open and Roland-Garros this year), the title at Wimbledon is in on the other hand a particular importance since it could be the only one of the year.

Expelled from Australia before the tournament for not having been vaccinated against covid, he could miss the US Open which begins on August 29 for the same reasons.

Under these conditions, and despite public support – Prince William and his wife had left Center Court on Tuesday to come and watch the end of his quarter against David Goffin – Norrie will be the outsider.

So can he prevail?

“Certainly!”, he retorts before acknowledging that “it will be difficult”.