Nigeria: nearly 900 detainees including jihadists escape from prison after an attack

Nearly 900 detainees have escaped from a prison in Abuja, the capital of Nigeria, of which at least 443 are still missing, authorities announced on Wednesday July 6, who attributed the attack to the rebels… 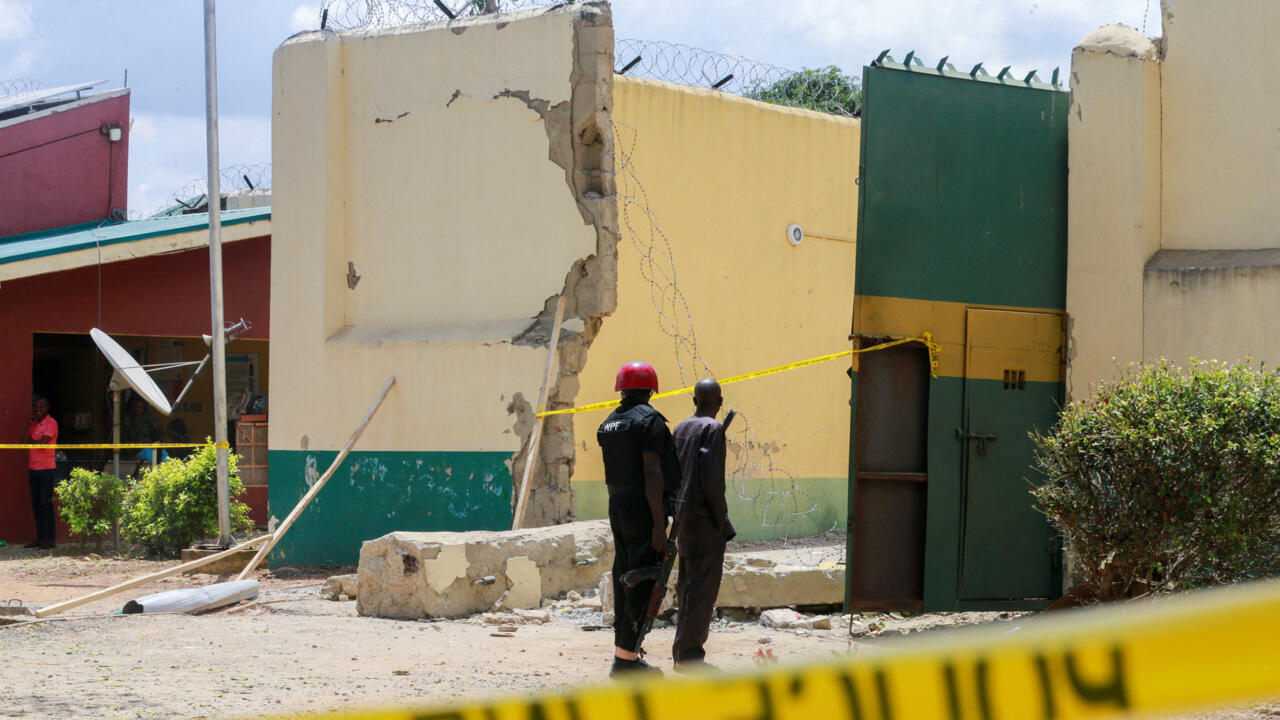 Nigeria: nearly 900 detainees including jihadists escape from prison after an attack

Prison guards look at the damage from the attack on Kuje prison, near the Nigerian capital Abuja, on July 6, 2022. © Afolabi Sotunde, Reuters

Nearly 900 detainees have escaped from a prison in Abuja, the capital of Nigeria, of which at least 443 are still missing, authorities announced on Wednesday (July 6th), who attributed the attack to Islamic extremist rebels.

At the same time, armed men launched a deadly attack on a security convoy preparing for the upcoming visit of Nigerian President Muhammadu Buhari to Katsina State (Northwest) for Eid El-Kébir.

It was with cold anger that President Muhammadu Buhari saw the damage inside Kuje prison.

This just before taking his plane for the international conference which he must attend Thursday, July 7 in Dakar.

The Nigerian head of state says he is "

disappointed by the intelligence system

", because this establishment supposed to be the most secure in the country has fallen like a vulgar sandcastle.

The meticulous and synchronized attack lasted almost 3 hours overnight from Tuesday to Wednesday.

A scenario however announced a few hours earlier by certain security sources.

However, the guards and security forces were completely overwhelmed by the waves of assailants and especially by the chaos of the explosions: several walls of Kuje prison did not resist.

64 suspected Boko Haram members are among the 879 fugitives.

At this time, no source has been able to confirm whether these men believed to be affiliated

with the Islamic State group

are among the 300 prisoners from Kuje who have been caught or who have surrendered voluntarily.

Because at least 443 of the 879 escapees are still missing, said Umar Abubakar, spokesman for the Nigerian Corrections Service, while hundreds more have been recaptured or turned themselves in to police stations.

This spectacular attack on Kuje prison, located not far from Abuja international airport, comes less than a year after arsonists invaded Jos prison in central Nigeria and freed many detainees.

Over the past 18 months, at least

five prisons have been attacked

They came in large numbers, entered inside the prison and freed inmates.

We have tried to find out what kind of prisoners have been released and we are trying to find them.

I think everything is under control.

According to our records, we believe that the people who attacked the penitentiary belong to particular groups, most likely to Boko Haram, because we have a large number of inmates here who belong to Boko Haram precisely.

Among them, about 64 escaped.

Nigeria: in the face of bandit attacks, the State of Zamfara calls on civilians to arm themselves