Johnson's resignation, who will succeed the British Prime Minister?

China News Service, Beijing, July 8th: Johnson resigns, who is the successor of the British Prime Minister?   Author: He Luman Zhang Mingxin   After more than 50 British government officials announced their resignation, British Prime Minister Johnson finally failed to withstand the pressure of "forcing the palace" and issued a resignation statement at noon on July 7, local time, announcing his 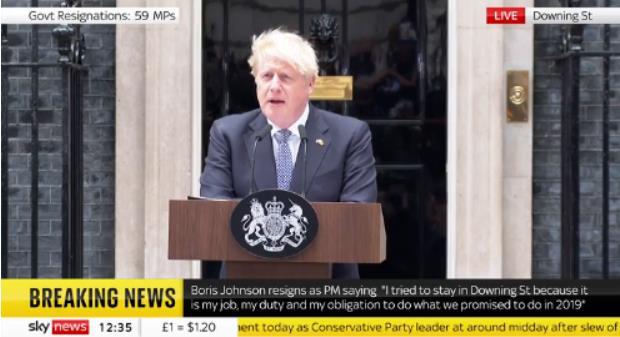 After more than 50 British government officials announced their resignation, British Prime Minister Johnson finally failed to withstand the pressure of "forcing the palace" and issued a resignation statement at noon on July 7, local time, announcing his resignation as the leader of the ruling Conservative Party and the prime minister, but will Remain as prime minister until a new leader emerges.

Johnson's resignation statement was not long, and sent a total of three signals:

1. Although I have resigned, I will not leave immediately.

Johnson's resignation statement was very direct, and he stated objective facts as soon as he came up. "The will of the Conservative Party in Parliament is very clear. Now the party needs a new leader and becomes the Prime Minister of the United Kingdom." He said, "Elect a new leader. Work has now started and a specific timetable will be announced next week."

The point, though, is that he himself will remain in office until "a new leader is in place."

It was supposed to be a resignation statement, but Johnson said he began to immerse himself in "all kinds of achievements" since he came to power.

For example, in 2019, he led the Conservative Party to its largest seat advantage in parliamentary elections since 1987 and the most votes since 1979.

He is proud of his accomplishments, which include completing Brexit, leading the UK through the pandemic, rolling out vaccinations the fastest in Europe, and being at the forefront of supporting Ukraine and fighting Putin. .

3. Thank you guys for making me prime minister, I want to try to stay in office.

Johnson thanked British voters who voted for the Conservatives in the last general election and said he had been fighting to stay in office for the past few days, but unfortunately it didn't work out, "it's painful".

Finally, he thanked his wife and family, the civil service team and the staff who helped him.

He believes that even if things look "dark" now, the future will be "golden".

For Johnson's speech, many people gave their views.

But at the same time pointed out that "now we need a clean start".

British Home Secretary Pat said it was her "responsibility" to continue in the role.

"At this critical time, it is my duty to continue to lead this great office of state in protecting our national security and keeping our nation's citizens safe," she said.

While on a "business trip" in Indonesia, the British Foreign Secretary Truss, who was originally attending the G20 meeting, claimed that Johnson had made the right decision before he returned home.

She affirmed the achievements of the British government during Johnson's tenure and called on all to "calm and unite" until a new leader is elected.

Truss is currently considered one of the most likely candidates to succeed Johnson as British prime minister.

In the latest poll released by British analytics firm YouGov, he topped the list with 13 percent of the vote.

He pledged on July 6 to rebuild and develop the struggling UK economy and said all options would be considered.

Chancellor of the Exchequer Rishi Sunak who just resigned.

With Johnson announcing his resignation, competition within the Conservative Party has begun.

But no matter who is the next leader of the party, who can ascend to the throne of Prime Minister, will face a crisis-ridden Britain.

People wait in line for buses at a bus stop in London, England, June 21, 2022, due to disruptions to subway service.

Millions of British adults are caught in the dilemma of food and clothing, and the intensifying cost of living crisis has made it impossible for the public to endure an incompetent government.

In addition, at present, a wave of strikes has broken out in many industries, and the "Summer of Dissatisfaction" is being staged in the UK.

In addition to the hot potato in domestic affairs, there are also diplomatic problems left for the next leader.

Previously, Johnson hoped to gain more support by showing his presence on the international stage.

He made two unannounced visits to Kyiv and insisted that he would do everything possible to aid Ukraine in an attempt to build a diplomatic image as a major power leader.

However, the British media bluntly stated that neither support for Kyiv nor exaggerated appearances at the G7 and NATO summits could cover up Johnson's "empty foreign policy"-Brexit has failed, and he does not know how to integrate into the world.

In the face of an unsolvable complex crisis, how will the UK get out of the "darkness" and usher in a golden future?