For the first time, the Israeli company NSO will have to answer for its alleged responsibility in espionage with the computer program that it created and markets, Pegasus. The Court... 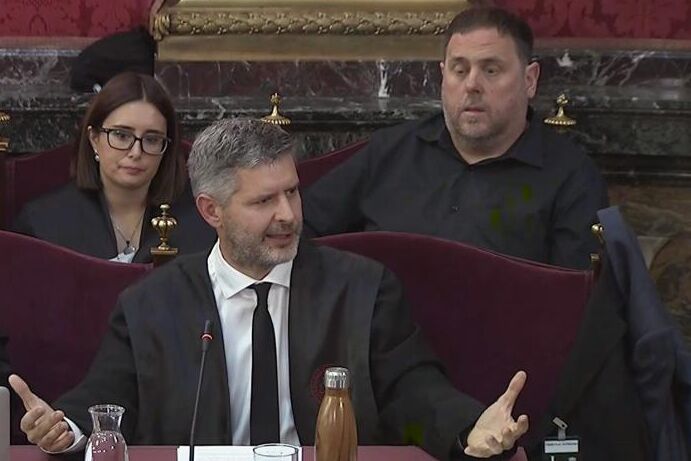 For the first time, the Israeli company NSO will have to answer for its alleged responsibility in espionage with the computer program that it created and markets, Pegasus.

The Barcelona Investigating Court number 24 admitted for processing the complaint filed by the lawyer Andreu Van den Eynde, who represents the various leaders of ERC in various legal cases, against the company for "the creation and making available to third parties of the program Pegasus" and for the actions and omissions of NSO that could have contributed to the infection of the lawyer's telephone devices.

In this way, the court decided to investigate whether the company committed a crime of discovery and disclosure of secrets as a violation of the privacy of another person without their consent in the infection of the lawyer's phone "for the actions consisting of creating and putting made available to third parties from the Pegasus program by NSO and Cyber ​​Technologies".

The magistrate summons Van den Eynde to testify as a witness and victim and after that appointment she will decide whether the testimony of the director of the CNI Esperanza Casteleiro is pertinent.

Also after the appearance of the lawyer and other requested proceedings, the court will decide whether to summon a representative of OSY Technologies, based in Luxembourg and which owns the companies of the NSO group, as investigated in this procedure.

The ERC lawyer's complaint highlights that the company was allegedly able to "voluntarily and knowingly contribute to the verification of the infection, access and extraction of information" from the lawyer's devices.

"For the first time, a court has made a decision aimed at investigating the facts in an effective way" remarked Andreu Van den Eynde and added "it is the first decision that we can take as effective judicial protection for the victims of the facts".

Considers that "the resolution admits that, within the hypotheses of the investigation, it must be clarified what is the role played by NSO that, despite being the only developer and marketer of Pegasus, is still kept in the shadows and works in an opaque way ".

The court urges the Prosecutor's Office to position itself on the acceptance as a popular accusation of the Generalitat.

It is the first of the numerous lawsuits filed by several independentistas that appear on the Citizien Lab list as being spied on with Pegasus that directly affects NSO.

A few weeks ago, the Barcelona Investigating Court number 21 also admitted for processing the complaint filed by members of Òmnium Cultural who were victims of espionage, but, in accordance with the criteria of the Prosecutor's Office, it excluded the NSO company from the investigations for the time being.

In this sense, the Investigating Court number 20 of Barcelona agreed to refer the complaint for the espionage with Pegasus presented by the ERC deputy Josep Maria Jové and the MEP Diana Riba to the Court 32, which investigated the attack on the cell phones of the Republican leaders Roger Torrent and Ernest Maragall, in a case that is provisionally archived.

The magistrate considers that "there is full connection" between the events denounced by Jové and Riba and the attacks on Maragall and Torrent, despite the fact that the Investigating Court number 32 has so far refused to accept other complaints filed by those spied on with Pegasus.

A few days ago, the president of the Generalitat, Pere Aragonès, in turn filed a complaint with the Barcelona courts to investigate the attacks on his cell phone in January 2020, in full negotiation for the investiture of Pedro Sánchez as president of the Government.