The war in Ukraine seems to have put the Middle East on a hot plate. In Iran, the government announced that it would stop subsidizing flour, due to the rise in international prices as a result of the war in Ukraine. This announcement led to a wave of protests that quickly turned into political demonstrations 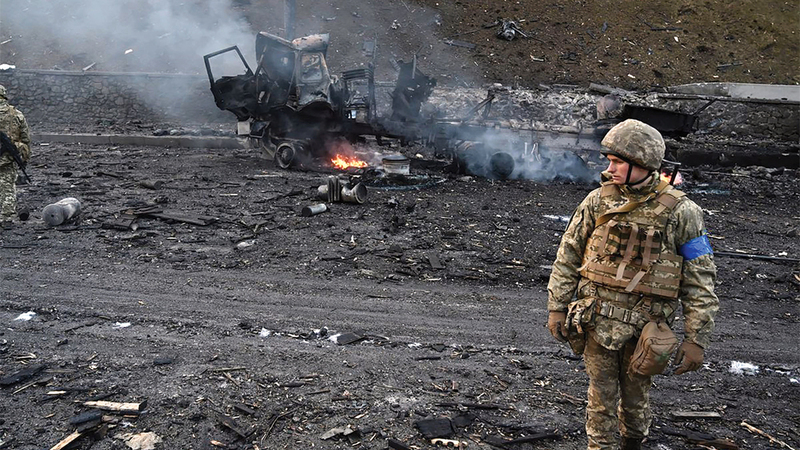 As a result of the increase in grain prices

The war in Ukraine seems to have put the Middle East on a hot plate.

In Iran, the government announced that it would stop subsidizing flour, due to the rise in international prices as a result of the war in Ukraine.

This announcement led to a wave of protests that quickly turned into political demonstrations calling for the overthrow of the Iranian government.

But it is not only Iran that has been affected in the region as a result of the rise in flour prices.

In 2020, Russia and Ukraine supplied 43% of flour imports to the Middle East and North Africa, compared to 19% in 2008, as this region relies heavily on Russian and Ukrainian wheat.

Not the first shock

Such a shock was not the first of its kind in history, as turmoil in global grain markets heated up the political climate in the Middle East and North Africa, as wheat prices rose dramatically three separate times between 2008 and 2012, and resulted in what became known as With the Arab Spring, things deteriorated into a state of bloody wars.

To mitigate these risks, the administration of US President Joe Biden has committed hundreds of millions of dollars to combat global food insecurity.

However, the administration must deal differently with friendly countries than with enemy countries, as the assistance of partner countries such as Morocco, Tunisia, and Egypt should be more generous.

In comparison, there is no reason to support a country like Iran, whose corruption and military adventurism are the main motives that brought the country to the difficult situation of its people, even before the war in Ukraine.

There are several ways in which the war contributed to destabilizing the wheat and wheat markets, of which Russia and Ukraine are among the largest exporters.

First, the war itself has complicated, if not impossible, the process of planting and harvesting crops.

Third, sanctions on Russian gas and oil could threaten supplies, increase costs for fertilizer and fuel, and raise prices for the seeds themselves.

Fourth, despite the absence of sanctions on Russian grain, financial sanctions make it difficult to conduct any business with Russia.

The difficulty of transportation has also increased due to military operations and the dangerous movement of cargo ships.

The North African region suffers from a scarcity of renewable water, as it contains 2% of the world's renewable water sources, which has led to many droughts.

Therefore, the countries of this region depend heavily on the import of cereals for their food security, and are also greatly affected by the sudden rise in prices.

Egypt, Algeria and Morocco are among the world's largest grain importers in 2020.

Ukrainian and Russian exports of grain exceeded the market share in North Africa, as Russia was the world's first exporter of wheat in 2020, while Ukraine came in fifth place.

Over the past few years, a quarter of the world's wheat exports came from Ukraine and Russia, a share that has risen sharply since 2008. Russia has 27% of the market, while Ukraine has 16%.

Between 2018 and 2020, Russia and Ukraine exported corn worth $6.5 billion annually to the North African region, or 23% of the region's total imports, of which Ukraine's share was 19%, while Russia's share was only 4%.

Most North African countries have good relations with Russia, so there is no reason for Moscow to use the grain export issue as a weapon against these countries.

But poor countries in the region may still struggle to meet the bill for Russia's grain exports.

Although Egypt was the breadbasket of the Roman Empire, it is now the largest importer of wheat in the world, importing 81% of its wheat needs from Russia and Ukraine between 2018 and 2020.

The World Bank classifies Egypt as a low-middle-income country, and accordingly it is greatly affected by the rise in food prices.

Lebanon, Libya, and Yemen imported 50 percent or more of their wheat needs from Ukraine and Russia between 2018 and 2020.

Libya and Tunisia got half or more of their maize needs from Ukraine and Russia.

And if the war in Ukraine continues, wheat importers may find themselves facing a bigger shock in the first half of 2023. The United States may provide additional assistance to friendly countries such as Tunisia, Morocco and Egypt, to enable them to secure sufficient imports of this material and achieve their food security.

Lebanon, Syria, and Yemen currently receive significant humanitarian aid through the United Nations, most of which is paid for by the United States and other Western donors.

Iran, which has posed a threat to US interests in the Middle East for the past four decades, has become the scene of protests as a result of rising bread prices over the past few weeks.

The most important of these protests took place in the southwestern provinces, where mismanagement of water resources is the worst across Iran.

These protests combined with the demonstrations caused by the collapse of a residential tower, which killed 41 people in Abadan, in the Khuzestan province in southwestern Iran.

The common denominator among most of these popular protests that have rocked Iran since 2017, although they begin for economic reasons, they quickly turn political, and internal discontent endangers the ruling regime.

It seems that Iran's economic crises will not end soon, given that the Iranian government considers the continued work to produce a nuclear weapon, in addition to its foreign military adventures, far more important than developing a prosperous life for its citizens.

Saeed Ghasemi-Nejad is a researcher at the Foundation for Defense of Democracy specializing in Iran.

In 2020, Russia and Ukraine supplied 43% of flour imports to the Middle East and North Africa, compared to 19% in 2008, as this region relies heavily on Russian and Ukrainian wheat.

Although there are no sanctions on Russian grain, financial sanctions make it more difficult to do business with Russia.

The difficulty of transportation has also increased due to military operations and the dangerous movement of cargo ships.