AFP: Vice Premier Liu He had a phone call with US Treasury Secretary Janet Yellen this morning. Did the US side say in this call that it will cancel the tariffs on goods imported from China? Has China indicated that it will reform the so-called "non-market behavior"?   Zhao Lijian: Regarding the video call between Vice Premier Liu He and Treasury Secretary Yellen this morning, the Chinese side ha 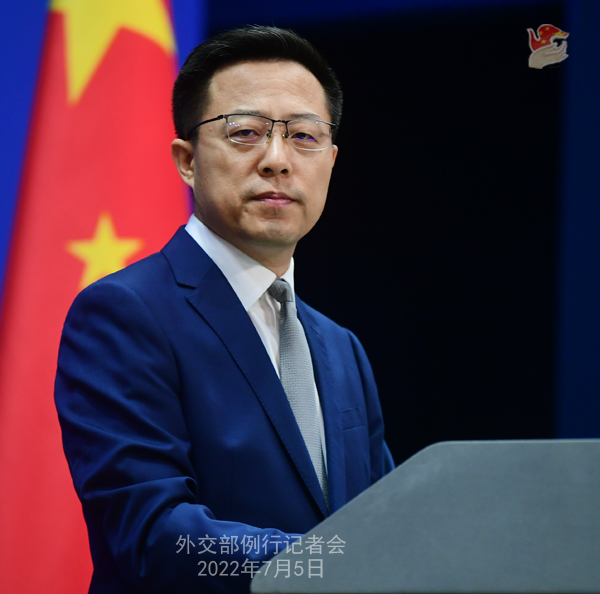 AFP: Vice Premier Liu He had a phone call with US Treasury Secretary Janet Yellen this morning.

Did the US side say in this call that it will cancel the tariffs on goods imported from China?

Has China indicated that it will reform the so-called "non-market behavior"?

Zhao Lijian: Regarding the video call between Vice Premier Liu He and Treasury Secretary Yellen this morning, the Chinese side has released the relevant press release, and I have no further information to provide.

We have noticed the relevant content of the US press release accusing China of so-called "non-market behavior".

The U.S. claims are inconsistent with the facts.

This is a valuable experience for China's economic development.

China's reform and opening up is beneficial to China and the world.

This not only promotes China's economic development, but also makes important contributions to the prosperity of the world economy.

On the tariff issue, China's position is consistent and clear.

The cancellation of all additional tariffs on China will benefit China and the United States, as well as the entire world.

According to estimates by a US think tank, the cancellation of all additional tariffs on China will reduce the US inflation rate by 1 percentage point.

TASS: It's also about Vice Premier Liu He's phone call with the US Treasury Secretary.

China calls the exchange "constructive". What is the Foreign Ministry's comment on China-US pragmatic cooperation and dialogue?

Zhao Lijian: I just introduced the phone call between Vice Premier Liu He and the US Treasury Secretary.

In this video call, the two sides exchanged opinions pragmatically and candidly on the macroeconomic situation, global industrial chain and supply chain and other topics, and the exchanges were constructive.

The two sides believe that the current world economy is facing severe challenges. It is of great significance to strengthen the communication and coordination of macro policies between China and the United States, and jointly maintain the stability of the global industrial chain and supply chain, which is beneficial to China and the United States and the whole world.

During the call, the Chinese side expressed its concern over issues such as the removal of additional tariffs and sanctions imposed by the United States on China and fair treatment of Chinese companies.

Both sides agreed to continue to maintain dialogue and communication.

Kyodo News: The Chinese coast guard ship entered the territorial waters of the Senkaku Islands on the morning of the 5th and approached the Japanese fishing boat.

Japanese Foreign Minister Lin Fangzheng has protested to the Chinese side.

How does China respond to this?

Zhao Lijian: The Diaoyu Islands and their affiliated islands are China's inherent territory.

The Chinese coast guard ships carried out on-the-spot law enforcement against Japanese right-wing fishing boats in accordance with the law, which is a legitimate measure to safeguard sovereignty.

Pakistan News Agency: The Minister of Investment of Pakistan said in an interview that since the inauguration of the current Pakistani government in April, Chinese investment in Pakistan has continued to increase.

Zhao Lijian: I have noticed the above-mentioned reports and appreciate the remarks made by the Pakistani side.

China and Pakistan are all-weather strategic partners with extensive and in-depth cooperation in various fields.

The Chinese side is willing to work with the Pakistani side to continue to strengthen cooperation in the fields of economy, trade and investment to achieve mutual benefit, win-win results and common development.

How does China evaluate the outcome of this meeting?

What are your expectations for the next development direction of Lancang-Mekong cooperation?

Zhao Lijian: Over the past year, the six Lancang-Mekong countries have adhered to the original intention of "drinking the same river and connecting their destiny", joined hands to fight the epidemic, promoted high-quality connectivity, vigorously carried out local cooperation, and jointly built livelihood projects.

The Lancang-Mekong cooperation has maintained a high level of development and has successfully created a "golden model" for regional cooperation.

China has provided more than 200 million doses of COVID-19 vaccines to the Mekong countries, and established nearly 150 pairs of sister provinces and cities with the five countries.

Practical cooperation in various fields has flourished and flourished, making important contributions to the economic recovery of the six countries and regional prosperity and revitalization.

China News Service: Recently, an African-American youth named Gerland Walker in Ohio was shot dead by eight police officers in a series of more than 90 shots.

The incident sparked large-scale protests in many parts of the United States.

Zhao Lijian: I am shocked by the incident.

Violent law enforcement against ethnic minorities is not uncommon in the United States.

According to statistics, since 2020, the number of deaths caused by police law enforcement in the United States has reached 2,563, of which 565 were killed by African Americans, accounting for more than 22%.

This year alone, 49 African Americans have been shot and killed by American police.

From the sinful slave trade in the past, the expulsion and massacre of Indians, to the dire situation and tragic suffering of African-Americans and other minorities today, the "white supremacy" and "racial substitution theory" in the United States are rampant, and the systematic and universal racial discrimination has intensified.

All human beings, regardless of race, gender, language or religion, enjoy human rights and fundamental freedoms, which is the spirit of Article 1 of the Charter of the United Nations.

UN Secretary-General António Guterres pointed out at this year's International Day for the Elimination of Racial Discrimination that racism is a "dark force" that threatens the values ​​of democracy, stability and peace.

As a state party to the United Nations International Convention on the Elimination of All Forms of Racial Discrimination, the United States has been unable to take effective measures to change systemic racial discrimination, which has seriously violated its obligations under the Convention.

How much more does the US government need after the deaths of "Floyd" and "Gerland Walker" before it can sincerely reflect and reflect, and take concrete actions to throw away pride and prejudice and achieve fairness and justice?

Reuters: After Vice Premier Liu He and U.S. Treasury Secretary Yellen spoke on the phone, will Chinese and U.S. leaders also speak on the phone in the near future?

Zhao Lijian: At present, I have no news to release.

China Daily: Recently, Rubin, a senior researcher at the American Enterprise Institute, wrote an article saying that the "One China" policy is a lie and that Taiwan is not part of China. Sovereignty, but did not clarify the issue of the transfer of sovereignty.

Zhao Lijian: First of all, I would like to point out that lying requires disguise. This article by the American Enterprise Institute is the real lie. It spreads rumors in the name of scholars and research institutions in the name of "academic".

The content of the article obviously violates the common sense of history and law, deliberately confuses black and white, and confuses right and wrong. The motive behind it is nothing more than to attract people's attention, hollow out the one-China principle, cooperate with anti-China forces to "control China with Taiwan", and promote "Taiwan independence" forces. Relying on beauty to seek independence”.

The so-called "San Francisco Peace Treaty" is an illegal and invalid document issued by the United States to make a separate peace with Japan after the Second World War, while excluding the People's Republic of China and the Soviet Union.

This document violates the "United Nations Declaration" signed by 26 countries including China, the United States, the United Kingdom, the Soviet Union in 1942, the United Nations Charter and the basic principles of international law. All are illegal and invalid.

The Chinese government has solemnly stated from the very beginning that since the "San Francisco Peace Treaty" was not prepared, drafted and signed without the participation of the People's Republic of China, the Chinese government considers it illegal and invalid and will never recognize it.

The Soviet Union, Poland, Czechoslovakia, North Korea, Mongolia, Vietnam and other countries also refused to recognize the validity of the document.

There is only one China in the world, and Taiwan has been an inalienable part of China's territory since ancient times.

A series of international legal documents, including the Cairo Declaration and the Potsdam Proclamation, have clearly and unmistakably confirmed China's sovereignty over Taiwan.

Although the two sides of the Taiwan Strait have not yet been fully unified, the fact that the mainland and Taiwan belong to the same China has never changed, and China's sovereignty and territory have never been divided.

The facts of the Taiwan issue are clear, and the latitude and longitude of one China is clear.

History cannot be tampered with, and right and wrong cannot be distorted.

Any attempt by anyone to challenge the one-China principle recognized by the international community is futile. China's safeguarding of national sovereignty and territorial integrity will not allow any external interference.

ATV reporter: We have noticed a series of interactions between Chinese and Australian officials recently.

How do you see the next development of China-Australia relations?

Zhao Lijian: A healthy and stable China-Australia relationship conforms to the fundamental interests and common aspirations of the two peoples.

There is no "autopilot" model for improving China-Australia relations, and a restart requires practical action.

This is in line with the aspirations of the two peoples and the trend of the times.

We hope that the Australian side will view China and China-Australia relations rationally and positively, and in the spirit of mutual respect and seeking common ground while reserving differences, we will meet China halfway and promote the healthy and stable development of the China-Australia comprehensive strategic partnership.