Marimar Blanco asks to intervene in the tribute to her brother: "The refusal to express myself freely is incomprehensible"

"It is impossible for me to explain why I will not be able to give a short speech on the 25th anniversary of my brother's death, in the same town where I... 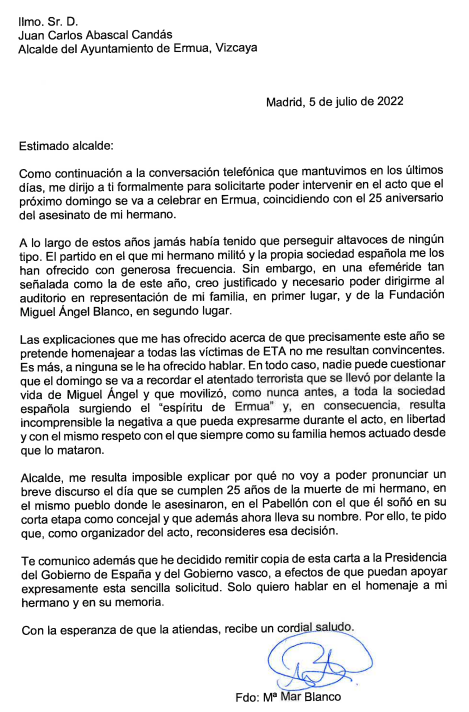 "It is impossible for me to explain why I am not going to be able to give a brief speech on the 25th anniversary of my brother's death, in the same town where he was murdered, in the pavilion he dreamed of in his short life. stage as councilor and that also bears his name", Marimar Blanco told the mayor of Ermua Juan Carlos Abascal (PSE-EE) after being excluded from the institutional act that, chaired by the King and Queen of Spain, will take place next Monday.

Marimar Blanco, sister of Miguel Ángel and president of the Foundation that bears the name of the councilor assassinated by ETA, asks Abascal to "reconsider" his decision not to intervene, which was communicated to him yesterday, Monday, which has caused outrage in the basque PP,

The Ermua City Council and the Royal House are finalizing the details of the event that will begin next Sunday at 12:30 p.m. at the Miguel Ángel Blanco sports center.

An event chaired by the King and Queen of Spain and in which the Spanish President Pedro Sánchez and the Lehendakari Iñigo Urkullu have also confirmed their presence.

Unless there is a change of opinion, only these three institutional representatives are expected to intervene in the act together with Mayor Abascal, who relieved Carlos Totorika, the first mayor who led the mobilizations against ETA 25 years ago, at the head of the Biscayan City Council.

Abascal had communicated to Marimar Blanco in recent days that the institutional act next Sunday is "a tribute to Sotero Mazo (assassinated by ETA in 1980), to Miguel Ángel Blanco, to all the victims, to the citizens and to all the agents social, political, judicial, police who actively participated in the fight for freedom and the defeat of ETA".

In this way, Marimar Blanco would not have the opportunity to intervene and her role would be limited to collecting a "detail" that Abascal intends to deliver to all the members of the Ermua Corporation of 1997.

Blanco's sister, however, does not accept this decision of the City Council that, with four days to go before the event, is still outlining its development with the Royal House.

"I only want to speak in tribute to my brother and in memory of him," Blanco maintains in the letter that he has sent to Abascal but of which he has also sent copies to the Presidency of the Government of Spain and the Basque Government.