"A historian by vocation and profession, I fought the war in Algeria," wrote Pierre Vidal-Naquet. The historian was not the only one to engage in this fight. The eight years of war have seen the formation of… 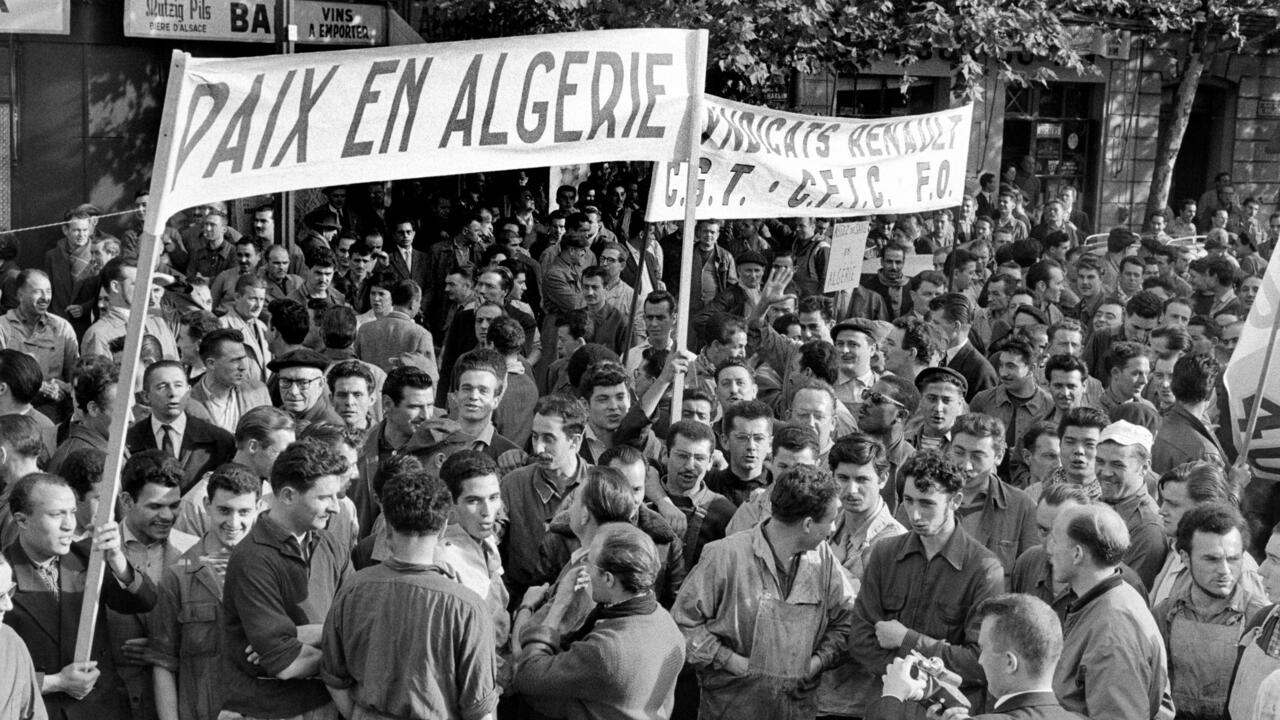 A banner proclaiming "Peace in Algeria" floats above the crowd of Renault workers in Boulogne-Billancourt on October 19, 1960. © AFP/Archives

A historian by vocation and profession, I fought the war in Algeria

The historian was not the only one to engage in this fight.

The eight years of war saw the formation in France of a real intellectual resistance to the atrocities perpetrated by the French soldiers in Algeria.

This mobilization brought together, beyond their political affiliations, some of the greatest figures of the French intelligentsia of the time.

The Algerians are celebrating, on July 5, the sixtieth anniversary of their independence, an independence won after a hard fight against colonial France.

Algeria's accession to sovereignty on that day in 1962 marked the end of 132 years of French colonization and eight years of war of liberation.

On the Algerian shore of the Mediterranean, history textbooks evoke the courage, self-sacrifice and sacrifices of the resistance

fighters of the National Liberation Front

(FLN), failing to recall the resistance of many French people to the atrocities of the colonial war waged by the tricolor army.

It was the honor of France during the Algerian war to have counted in its ranks convinced humanists and anti-colonialists, who also had to brave censorship, prison and torture, and campaigned for the rights of Algerians to independence.

The mobilization of French intellectuals against torture and their commitment alongside Algerians through mutual aid networks undoubtedly accelerated the process of gaining independence, in particular by internationalizing the conflict.

in Algiers and author of a remarkable survey on post-colonial Algeria (1).

Few people know, in fact, that by arguing that the French soldiers in Algeria were eating away at "

the soul of France

", the François Mauriacs, the Jean-Paul Sartres and the other Raymond Aron had succeeded in attracting the attention of a young and fiery American senator, still little known to the general public at the time.

Elected President of the United States in 1960, this one who was none other than John Fitzgerald Kennedy undertook to cut off military aid to France, if the war were to continue in Algeria.

Our Gestapo of Algeria

The war in Algeria began on the night of October 31 to November 1, 1954 with a series of attacks and sabotage committed at around thirty points on Algerian territory.

These attacks were claimed by a hitherto unknown Algerian group, the FLN.

It was the start of a tragic spiral that gradually dragged Paris into a policy of all-out repression, ranging from torture to summary executions, including “

” and other collective punishments.

In the Parisian newsrooms, we learned very quickly, almost from the start of the war, that torture was used in Algeria on a large scale.

The first articles appeared in the metropolitan press in 1955, denouncing these practices.

, the journalist Claude Bourdet published in January 1955 a tribune entitled "

Our Gestapo of Algeria

In his famous "Notebook" in

, François Mauriac used the same parallelism to say all the bad things he thought of successive socialist governments who sent young soldiers on the spot to perpetrate dirty work.

If the first revelations on the establishment across Algeria of "

real torture laboratories, with electric bathtubs and everything you need...

" left French public opinion unmoved, fed from the school benches by the colonial ideology of “

”, intellectuals saw the conflict as a new

Quickly, they seized on the forms of intervention popularized by the Affair such as tracts, libels, testimonies, manifestos, petitions, press articles to raise public awareness of the methods used by the military in Algeria, "

It must be said that in the decade surrounding the Algerian war, the memory of Nazi barbarism was still fresh in people's minds.

It is probably no accident that the most important essays and testimonies on the reality of war are published by Éditions de Minuit.

Founded during the 39-45 war, this publishing house made a name for itself by publishing

by Vercors, which gave an inside view of life in the maquis and resistance to Nazism.

During the Algerian war, the founder of Minuit Jérôme Lindon gave voice to Algerian resistance fighters, historians and committed journalists who told the reality of military practice in Algeria.

Communist and anti-colonialist activist, Henri Alleg the author of "The Question" died at the age of 91.

written by Henri Alleg, which brought the scandal of torture to the public square.

The author, former director of the communist newspaper

, delivers in these pages a chilling account of his time in the hands of paratroopers in the suburbs of Algiers.

Alleg will go down in history as "

This will not prevent his book from being seized by the censors.

Just as ten other books will be published by Éditions de Minuit, including

by Pierre Vidal-Naquet about the kidnapping in the middle of Algiers of the young communist Maurice Audin and his disguised murder by the army.

The editor, he will be summoned before the courts which accused him of “

But the damage was done.

The practice of torture by the military, with the blessing of their political hierarchy, could no longer be denied.

to sign a solemn address to the President of the Republic, summoning him to condemn the use of torture

It so happens that, the subject of passionate controversy, the Algerian war was also a moment of recomposition of the French intellectual landscape.

on the one hand, and

by Sartre, on the other – we are far of a binary and Manichean confrontation between the independence left and the French pro-Algeria right.

The men of good will on both sides had taken up the pen to express their revolt.

The cleavage which dominated the French intellectual scene during these years of lead was more personal than ideological, opposing two sacred monsters of French literature and thought, Albert Camus and Jean-Paul Sartre.

Coming from colonial Algeria where his mother still lived, the author of

knew from the inside this country "

of poverty and light

" and clearly felt in deep empathy with its French and Arab populations that he had encountered since his earliest childhood.

an Algeria just for all

" but in the lap of France, Camus will allow himself to be locked up in a solitary silence along the way, doubtless sensing that the wind of History condemned him to be a stranger in his native country.

In this file photo from November 28, 1948, French author and philosopher Jean-Paul Sartre sits in his office in Paris.

It is Sartre who will have the last word and will hold to shame the ambiguities of his main literary adversary in the face of the Algerian question.

between justice and my mother, I choose my mother

" does not pass, even if it reflects the dilemma of the intellectual faced with a double legitimacy, which was indeed the case of Algeria. camusian.

In 1960, two years from independence, Camus died in a tragic car accident on the roads of France.

In these last years of war, we are witnessing a radicalization of positions, with Sartre's

imposing itself as the conscience of his country which has never ceased to denounce colonialism and the abuses of the French army in Algeria. .

then called on the left to show solidarity with the FLN, because, he proclaimed, “

It was in the pages of Les

that the Declaration on the right of insubordination in the Algerian war was to appear in September 1960, the last last stand of honor for French intellectuals engaged in the battle of writings to save the honor of France.

But the magazine had been seized.

Better known as the "

", the declaration was published in

, under the patronage of the writer Maurice Blanchot.

It justifies insubordination, calling on the soldiers sent to the front to refuse to take up arms against the Algerian people because “

Their support will be worth to some of the signatories, tell the historians of the Algerian war, the prohibition of radio and television antenna, house arrests and suspensions of their station as regards civil servants.

Threatened with death, Sartre saw his apartment plastered twice, in June 1961 and in January 1962. However, this defense of insubordination did not go unnoticed in Algeria.

The call of 121 sounded like a thunderclap for us, leaders of the Algerian revolution, as for many Algerians.

This position has protected us against hatred

To cheer up, there was probably no better!

The suitcase carriers of the FLN

Portrait of the philosopher Francis Jeanson.

It is difficult to conclude this odyssey of French intellectuals through the troubled waters of the Algerian war, without dwelling on the role of the “

” and those who have been called “

The suitcase carriers were the small hands of the Algerian war.

Their role had been thought out and conceptualized by the philosopher Francis Jeanson, close to the Sartrean movement and considered by his peers as “

one of the most brilliant and original minds of his generation

The originality of Jeanson was to have succeeded in transforming the intellectual and moral support for the Algerian separatists from the FLN into effective material aid.

Formed in 1957 during a clandestine meeting, the Jeanson network was made up of intellectuals, Christians, communists breaking the ban.

" because their mission was to help transport FLN soldiers as well as arms, propaganda material and above all the money from the contributions of the 300,000 Algerian workers who financed the resistance in the terrain as well as the functioning of the government in exile.

When the network was dismantled and its leaders tried in 1960, Sartre gave them his support, stating in particular: "

Finally, the thousands of young French people who landed in Algeria in the aftermath of independence were the heirs of the suitcase carriers and anti-colonialist intellectuals who had taken up the cause of Algerian independence throughout the dark and uncertain war years. .

The work that this contributor to Le

has devoted to these cooperators before the letter, who have been called "pieds-rouges" in a nod to the pied-noirs of yesteryear, is a fascinating investigation into an unknown part of Franco-Algerian history.

The hopes and disillusions of the Pieds-Rouges, which the journalist recounts with insight and a consummate sense of storytelling, are emblematic of the centuries-old French passion for Algeria.

” only continued this long history made up of contacts, appropriations and rapprochements.

After all, as Francis Jeanson liked to say: “

The first traitor, wasn't he the one who built a bridge over a river that separated two communities?

Algeria, the Pieds-Rouges years: from dreams of independence to disenchantment (1962-1969)