France: Nupes will vote a motion of censure against Prime Minister Elisabeth Borne

French Prime Minister Elisabeth Borne is delivering her general policy speech to the National Assembly on Wednesday, the roadmap for her government. But contrary to custom,… 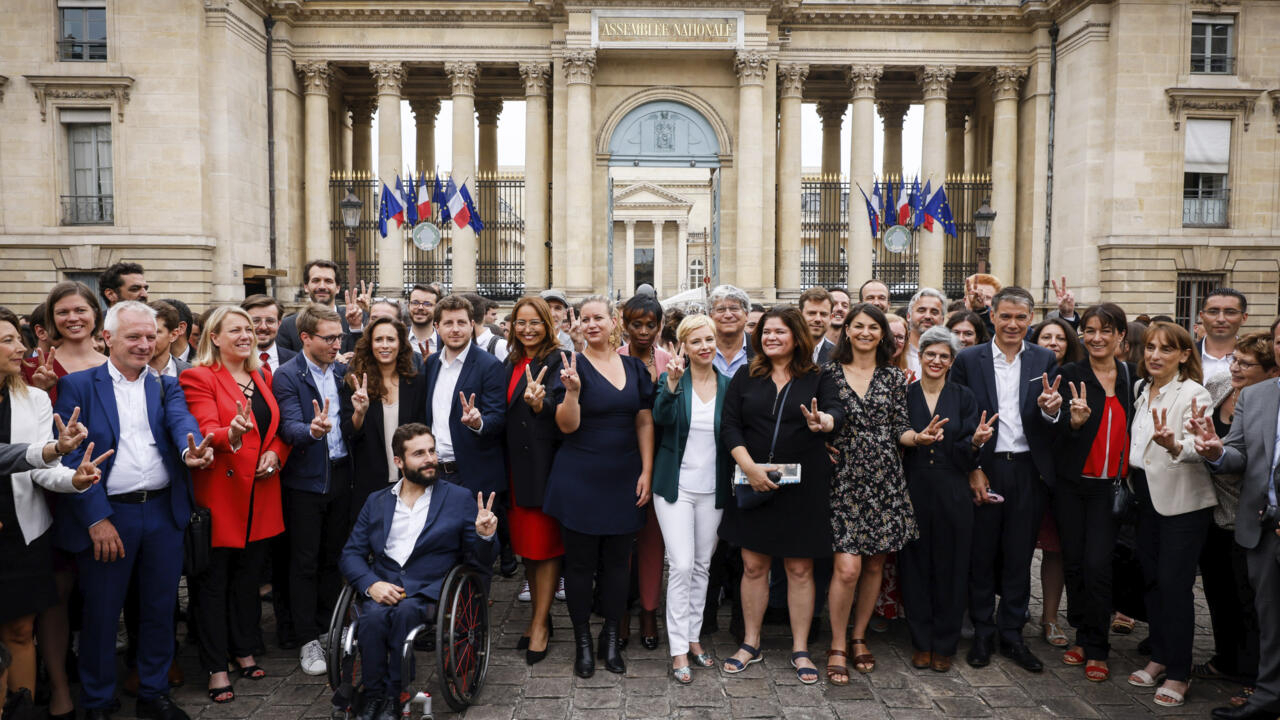 France: Nupes will vote a motion of censure against Prime Minister Elisabeth Borne

Nupes deputies in front of the National Assembly on June 21, 2022. AP - Thomas Padilla

French Prime Minister Elisabeth Borne is delivering her general policy speech to the National Assembly on Wednesday, the roadmap for her government.

But contrary to custom, she will not ask for the confidence of the deputies.

It is a vote that the Nupes knows lost in advance, the other oppositions having already announced that they would not support the motion of censure, despite the possibility of bringing down the government.

But the left makes it a matter of principle.

It is a common reasoning that led us to take this initiative, according to which

the government should have submitted to a vote of confidence

And we said to ourselves that if he did not, we were forced somewhere to carry this motion of no confidence

, ”explains Julien Bayou, co-president of the environmental group in the Assembly.

A way also to put the National Rally and Les Républicains, officially hostile to the government, in the face of their contradictions, as recalled by Jean-Luc Mélenchon, who came to support the Insoumis deputies on Tuesday morning, before returning to the subject at length during a conference in the evening, recalling that the two parties were now "

But the motion may not get the full vote even within the left.

Part of the socialist group was not in favor of it.

And the unilateral announcement of the tabling of the motion on Monday by La France insoumise has tensed within the Nupes.

Difference in political culture for the most conciliatory, bad habits to be quickly corrected for others, much more annoyed.

After the motion, place in the fight on the purchasing power

After this first test for the strength of the coalition on the left, Nupes will then have to get in working order for its next battle in Parliament: purchasing power.

The Nupes deputies consider that it

need to change gear in order to really help the French.

For this, the left has defined its priorities: minimum wage and retirement at 1,500 euros or a 10% increase in the salaries of civil servants.

Which is far from the "measurements" envisaged by the government, according to Boris Vallaud boss of the socialist group in the Assembly.

We prefer salaries rather than checks because it is more sustainable, because at this stage it is offered for a couple, as I understand it, with two children, 200 euros a month once.

, ”estimates the deputy of Landes.

► To read also: France: measures for purchasing power, but what budgetary equation?

The left is however ready to accept ephemeral measures, an increase in the back-to-school allowance or housing aid... But not on any condition.

All measures are lower than inflation since you end up with inflation over 7% by the end of the year.

In short, this text is very far from the expectations of the French

”, launches Mathilde Panot, the president of the Insoumis group.

The alternative program of Nupes is however very expensive: between 50 and 60 billion euros.

Expensive, but necessary according to the left-wing parties, which notably propose a super-tax on the profits of oil and gas companies to finance it.