After criticism and warnings, the Tunisian president adheres to the new draft constitution and calls for a "yes" vote on it

Today, Tuesday, Tunisian President Kais Saied called on Tunisians to vote on the new draft constitution, which he considered to be in the spirit of the revolution and the path of correction. 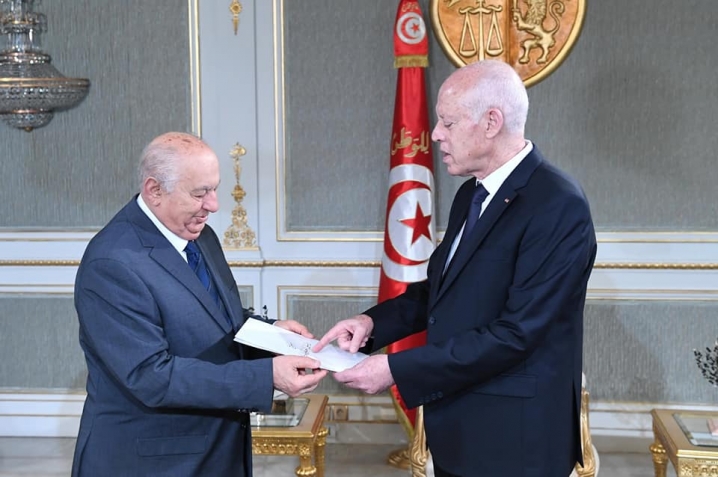 Today, Tuesday, Tunisian President Kais Saied called on Tunisians to vote on the new draft constitution, which he considered to be the spirit of the revolution and the path of correction. This comes as the Independent High Authority for Elections revealed the model of the voting paper.

In a statement addressed to the people, published by the official page of the Presidency of the Republic of Tunisia on Facebook, under the title "The state, rights and freedoms have a constitution that protects them, and the people have a revolution that those who oppose it will defend."

Saeed spoke about the spread of corruption, impunity from accountability, the worsening living situation and the creation of crises. He said, “Impoverishment, abuse, fallacies, maneuvers, and laws are put in place and those who put them know that they will not find their way to implementation, and other laws that are tailored to serve this party or that, as the 2014 constitution was established. Each side has a share.

Saeed criticized the dissolved parliament by a decision of him on March 30, and said, "The Tunisian people, at home and abroad, were following and protesting because it was no longer hidden from them.

Then he stated that what he called the sacred duty and historical responsibility required that the work of the Council be frozen before its dissolution "to save the people and save state institutions that were on the verge of collapse."

According to the Tunisian president’s statement, this constitution expresses the spirit of the revolution, and there is absolutely no prejudice to rights and freedoms, and he indicated that there is no fear for freedoms and rights if the legal texts place the majority under popular control, as well as oversight of the constitutionality of laws by the Constitutional Court.

Saeed also explained that the goal of establishing a national council for regions and regions is for everyone to participate in decision-making, and continued, "The state's first task is to achieve integration, and this goal will only be achieved by involving everyone on an equal footing in the development of legislation that the real majority puts under the constant control of the people."

The statement also stressed that the draft constitution submitted to the referendum does not prepare for the return of tyranny, in response to the many criticisms that targeted it, and said that many provisions and provisions stipulate the possibility of withdrawing the agency, the right of the Council to hold the government accountable, and to determine the right to run for the presidency for one time.

Saeed emphasized that whoever considers that the draft constitution prepares for an imbalance between functions is incorrect, as the balance, according to him, is not disturbed by the texts, but when one party or one coalition dominates all state institutions.

The Tunisian president indicated that the referendum day is an occasion to achieve the demands of the people and save the state, and said, "Say 'yes' so that the state does not fall into old age and until the goals of the revolution are achieved, there is no misery, no starvation, no injustice and no pain."

The head of the advisory body for the drafting of the new Tunisian constitution, Sadiq Belaid, had on more than one occasion denounced the recently published draft constitution, considering the text presented by President Kais Saied "dangerous."

In his lengthy interview with the French newspaper Le Monde published on Monday, the retired dean of the Faculty of Legal Sciences stated that the draft constitution presented for a vote is dangerous, and establishes an endless dictatorship in the interest of the current president, expressing his concern over the “reconstruction of religious authority” and consequently “ Returning to what he called "the dark ages of Islamic civilization".

Several points of difference emerged between the draft constitution presented by Belaid and the version published by the Presidency of the Republic, and there are chapters that were not originally included in the draft and others that have been changed.

Belaid explained - the day before yesterday, Sunday, in an interview with the Tunisian newspaper Al-Sabah - that there are many discrepancies, most notably Chapter Five, which relates that Tunisia is part of the Islamic nation, and that the state works alone to achieve the purposes of the Islamic religion.

He also considered that the president's draft constitution included an ambiguous and ambiguous local and regional system that portends unexpected surprises, and also denounced what he called an incomplete and unfair organization of the Constitutional Court, which limits its independence.

The Official Gazette published the text of the proposed new constitution, which grants Saeed absolute powers, and a referendum on it will be held on July 25.

Saied removed from the proposed constitution almost all checks on his rule and weakened the role of parliament and the judiciary, leading to widespread accusations from his opponents that he was undoing the democratic gains that Tunisians made in the 2011 revolution.

He also seized most of the powers last year, ignoring the current 2014 democratic constitution and dissolving the elected parliament, saying he would rule by decree until he reconfigured the political system.

Meanwhile, the campaign for the referendum on the new constitution is entering its third day, amid a sharp political divide.

The electoral campaign for the referendum on the new constitution began on Sunday and will continue until July 21, which is one of the most important points in the road map announced by the President of the Republic on December 13, 2021, as part of a number of decisions within the framework of exceptional measures.

The campaign is launched amidst severe discrepancies in the political scene in Tunisia, both with regard to the nature of the referendum itself or the draft constitution submitted to the referendum.

While positions vary between supporters, conservatives, and boycotts, the debate continues over the independence of the electoral commission after changing its composition and appointing Saeed as its members following the dissolution of the previous body.

Yesterday, Monday, the Independent High Authority for Elections published a form for voting paper for the referendum on the constitution, in which the following question was asked: Do you agree with the new draft constitution for the Republic of Tunisia?

In French and Arabic.