On the road to the western entrance to the village of Ras Karkar, northwest of Ramallah in the West Bank, the family of Shaaban Nofal lives in a state of shock and astonishment after the Israeli occupation forces expelled them from their home, isolating all members of the family from him. 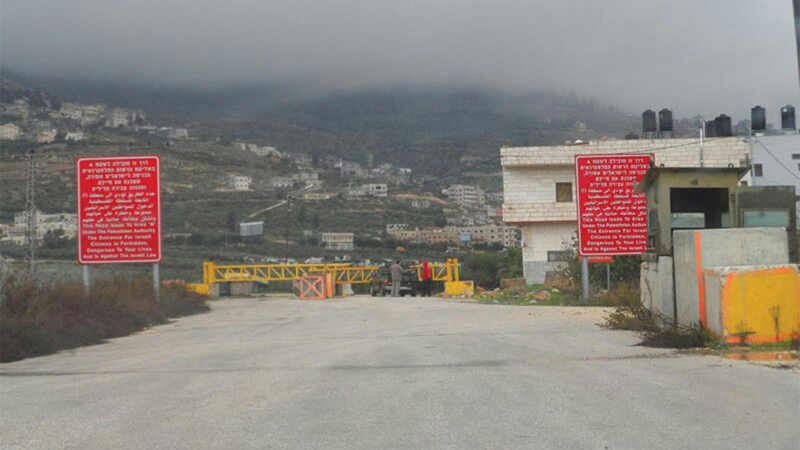 Occupation officers claim that the land of the village is Israeli, and it is a taboo

On the western entrance road to Ras Karkar village, northwest of Ramallah in the West Bank, the family of Shaaban Nofal is in a state of shock and astonishment after the Israeli occupation forces expelled them from their home, and isolated all family members from him.

The Nofal family spends most of its time isolated from its house, a few meters away from it, after the occupation forces stormed it on Wednesday, June 23, and raided its residents, expelling them by force of arms from their only shelter they have owned for decades.

On the same day, the residents of Ras Karkar woke up to the sounds of military vehicles besieging their homes, while Israeli bulldozers were destroying parts of the village street and its western entrance.

The head of Ras Karkar village council, Marwan Nofal, told "Emirates Today" that the street that was destroyed by the occupation mechanisms was a partial temple 20 years ago, and three months ago, coordination was made to start work on its rehabilitation, and two days after that, the occupation forces seized the Palestinian mechanisms A fine was imposed on the owners.

And he added: “After continuous promises to agree to resume rehabilitation work, the occupation bulldozers destroyed it without warning, after the Israeli forces raided the village inadvertently, reinforced with military vehicles, on the pretext that the land on which the street and the western entrance to the village were built is Israeli.”

Nofal continues: “During the storming process, the occupation officers informed me that Area C is forbidden, and you are prohibited from tampering with it because it is Israeli territory.”

He explains that the destruction of Ras Karkar Street, and its western entrance, caused the farmers to be isolated from their lands on the western side of the village, and to deprive them at gunpoint and, with the protection of the Israeli forces, of accessing it, entering it to take care of it, and picking aromatic herbs, which is their only source of income.

This bulldozing is added to a series of Israeli restrictions that suffocate 3,000 Palestinians in Ras Karkar, in addition to the continuing and escalating attacks of the occupation and settlement groups, whose bitterness the Palestinian residents sip daily around the clock, according to the head of the Ras Karkar village council.

Nofal says: “Ras Karkar is a disaster area, as it is surrounded by seven military iron gates that the occupation permanently erects at the entrances to the village, inside its streets, and areas leading to neighboring Palestinian villages and towns, as well as four settlements perched on its land since the seventies and eighties of the last century, which It gnaws large areas of Palestinian village lands.”

He added that "the Israeli forces stole more than 3,000 dunums of the village's lands, with an area of ​​5,900, over the past years, and built (Telmond) settlements on them, which are classified by Israel into three parts (A, B, C), Dolb, and ("Dolb"). Naira) and a settlement outpost erected at the top of the mountain (Al-Raysan), in the ancient village.

The head of the Ras Karkar village council indicates that the occupation not only shed the sword of these unjust restrictions on the necks of the residents, but also installed surveillance cameras, to monitor the movement of the people near the village’s main street, which the occupation denied them entry to, and has become a lawmaker in the face of the movement of settlers between settlements. The four, and those lying on the lands of the neighboring Palestinian villages and towns.

The destruction of Ras Karkar Street, and its western entrance, caused the farmers to be isolated from their lands on the western side of the village, and to deprive them at gunpoint and under the protection of the Israeli forces;

Access and nurture them, picking the aromatic herbs that are their only source of income.

Over the past years, the Israeli forces have robbed more than 3,000 dunums of the village’s lands, with an area of ​​5,900, and built “Telmond” settlements, which are classified by Israel into three parts (A, B, C), Dolb, Nira and a focus. A settlement is built at the top of Mount Al-Raysan, in the ancient village.