By narrowly beating Wout van Aert in Sonderborg, Dylan Groenewegen collected 120 valuable points. Not for the green jersey but the UCI classification, which will decide at the end of the relegation season... 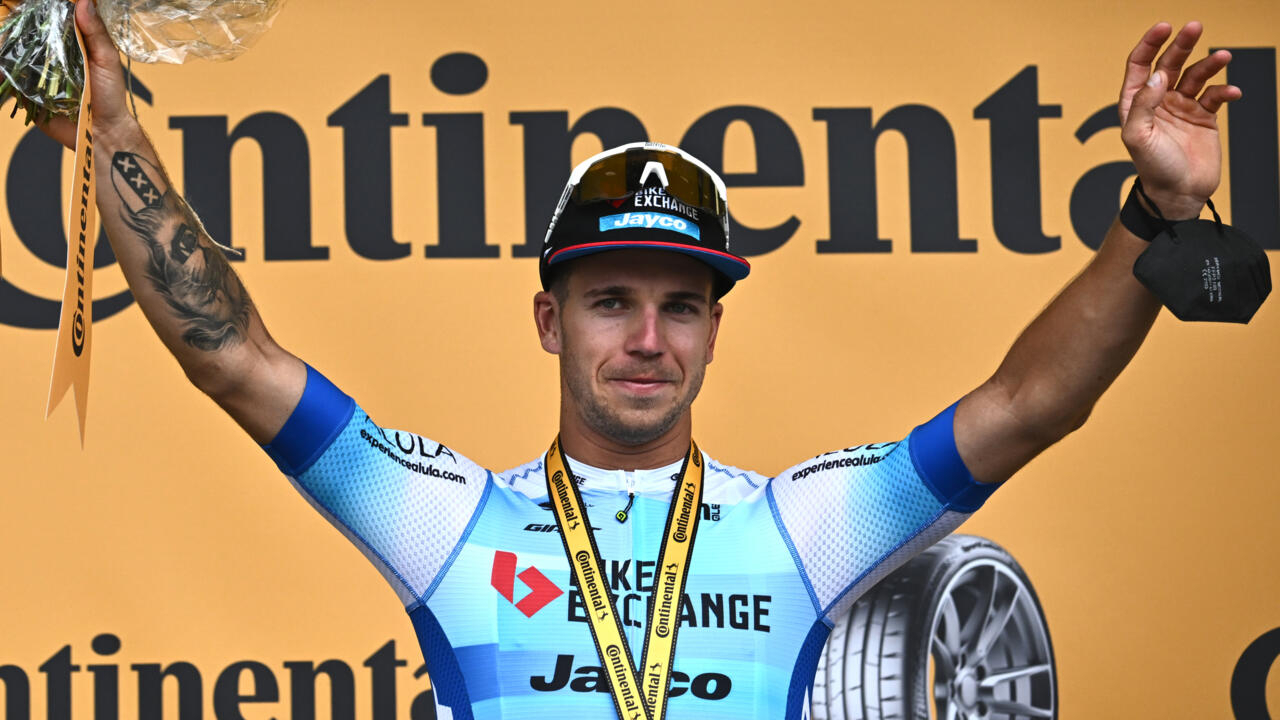 Eighteenth in this ranking compiling the results of the last three years, BikeExchange felt in his neck the breath of Lotto, first relegated.

At the last count before the start of the Tour de France, 21 points separated the Australian team from the Belgian formation: 12.705 points against 12.684.

A gap even smaller than Groenewegen's lead on Sunday.

Against all expectations, the Dutch sprinter was lined up before the Big Loop at the Tour of Slovenia, despite six stages of the mountainous Critérium du Dauphiné run a few days earlier.

Was this unusual participation in a second stage race just before the Tour de France linked to the points race?

"I don't think so" he said at a press conference before the Grand Départ in Copenhagen.

"It was a good preparation even if the Dauphiné was really hard", he assured.

The facts back him up.

Dylan Groenewegen cannot believe it, he has just won the 3rd stage of the Tour de France in Sonderborg, July 3, 2022 Marco BERTORELLO AFP

Fuglsang and Woods at the Mercan'Tour

Most teams deny any calculation.

“We try not to focus on that,” assures AFP Nicki Sorensen, sporting director of Israel Premier Tech, currently in a relegation position like Lotto, with 12,346 points before the Tour de France.

However, its leaders Jakob Fuglsang and Michael Woods competed in the modest Mercan'Tour Classic at the end of May where they scored twice with 125 and 85 points.

The speech is the same at Lotto.

"We are here to win and do our race, not to watch the points," said Belgian team boss John Lelangue.

Unfortunately, his training benefited little from Caleb Ewan between the Covid-19, which deprived him of Milan-Sanremo and Ghent-Welvelgem, then his fall from the first stage of the Giro.

But the young Arnaud De Lie, from his first year pro, kept it close to the waterline thanks to his six successes having brought in 1,505 points.

As well as veteran Philippe Gilbert, having accumulated 18 days of racing between the end of the classics season and the start of the Tour in a rather unusual program.

Dane Jakob Fuglsang during the time trial of the first stage of the Tour de France in Copenhagen, July 1, 2022 Liselotte Sabroe Ritzau Scanpix/AFP/Archives

"I don't think it will increase the number of racing days for the team," said Movistar sporting director Patxi Vila.

"But changing our program, that's for sure, he admits. We run where we think we can score the most points. It's not something we were doing. It's not our philosophy, but now, it's a priority."

With 13,272 units before the start of the Big Loop, the Spanish team is still far from being saved and is at the back of the pack in 16th place.

"It's extra work, describes Patxi Vila. This (Sunday) morning, we discussed it for two hours. Even if the Tour is underway, we only have eight riders here but 21 others to manage".

Last unusual participations: EF Education (17th rank, 13,261 pts) and Israel Premier Tech will line up in September for the first edition of the Maryland Cycling Classic, announced its organizers.

BikeExchange was already on the program.

But if rather than in second-tier races, the fight to stay in the World Tour was played out with a can?

On Sunday, five runners, but none of those from the struggling teams, were penalized with a 25-point withdrawal for throwing litter outside the designated areas.