First victory for Sainz in F1, after a hectic British GP

Great Britain will have served its share of "firsts" for Carlos Sainz: author the day before the first pole position of his career in Formula 1, the Spaniard won his first Grand Prix on Sunday,… 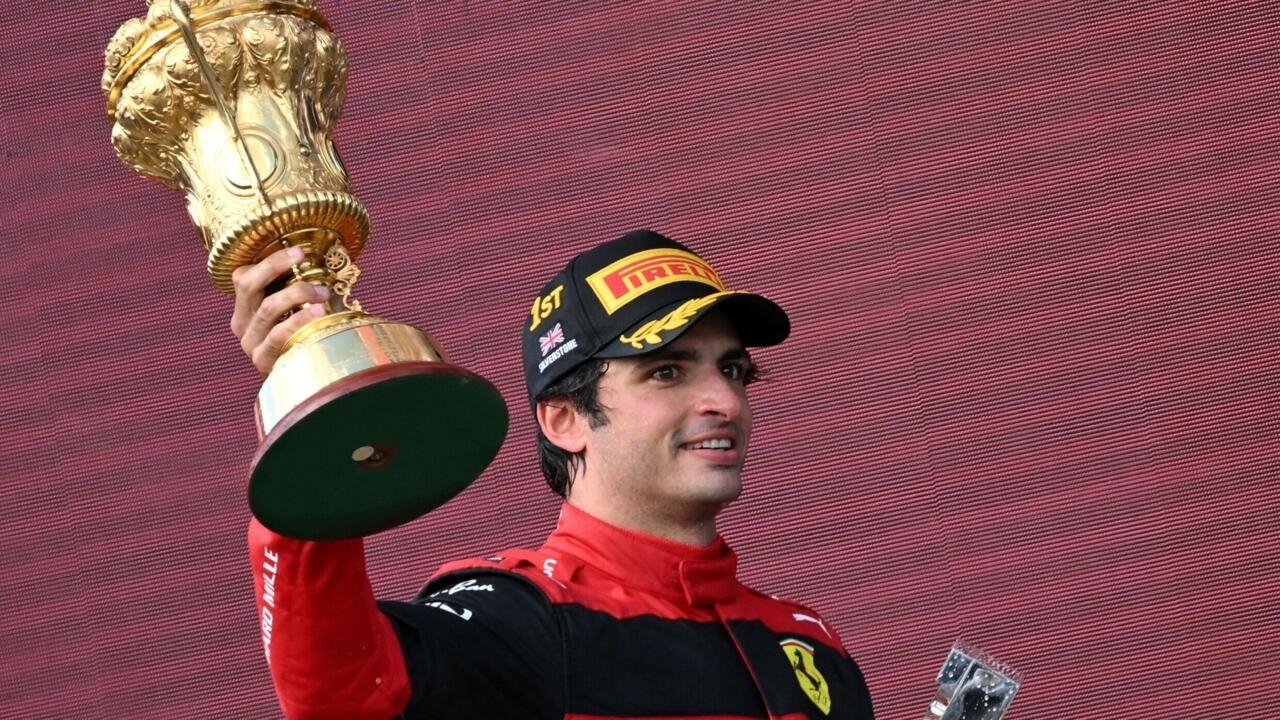 "It's incredible, first race victory 150 races later, with Ferrari and at Silverstone," reacted the Ferrari driver, who won ahead of Mexican Sergio Pérez (Red Bull) and Briton Lewis Hamilton (Mercedes).

Far behind, the Dutchman Max Verstappen, still leading the championship at the end of the race but in difficulty at the wheel of his Red Bull, finished in a modest 7th place after having fought against the German Mick Schumacher (Haas), who, eighth, scores his first points of the season.

On the mythical Silverstone route, where more than 400,000 spectators were expected this weekend, the show kept its promises.

The last laps saw in particular Sergio Pérez, Lewis Hamilton and the Monegasque Charles Leclerc (Ferrari) have a good fight for second place.

Pérez winning the battle, it was then a breathless fight for third place between Hamilton and Leclerc.

If he claims "to have given everything today (Sunday, editor's note)", Hamilton, seven-time world champion in the discipline, signs a sad personal record: that of the greatest number of races disputed - 11 in this case - without the slightest victory.

Never has the Briton, who has been struggling since the start of the season, waited so long for victory.

At the end of this British round, the 10th of the season, status quo in the drivers' championship for the first three: Verstappen has 181 points in the championship and is ahead of his teammate Pérez (147 points) as well as Leclerc (138 points).

Behind the leading men, the two Frenchmen on the grid, Esteban Ocon (Alpine) and Pierre Gasly (AlphaTauri) had to retire, the fault of a fuel pump problem for the first, a collision with his teammate for the second .

Earlier in the afternoon, the Grand Prix was interrupted only moments after the start due to an accident involving several drivers.

Alfa Romeo Chinese driver Zhou Guanyu loses control of his car resulting in an accident just after the start of the GP at the Silverstone circuit on July 3, 2022 Ben Stansall AFP

On the images broadcast by the producers of F1, the single-seaters of Pierre Gasly, George Russell (Mercedes) and Zhou Guanyu (Alfa-Romeo) came into contact as they approached the first corner.

Zhou Guanyu's single-seater, hit by Russell's, overturned to finish its race on the other side of the safety barriers, against the fences separating the track from the spectators.

At the same time, Alexander Albon (Williams), Esteban Ocon - but also the German Sebastian Vettel (Aston Martin) and the Japanese Yuki Tsunoda (AlphaTauri) - were also indirectly involved in the accident - the Williams having been sent against the barriers as the pilot tried to slow down.

Both Albon and Zhou were taken to the circuit medical center.

If the second came out "in good health", the first was transported to Coventry hospital "for precautionary examinations".

The crashed Alfa Romeo of Zhou Guanyu is towed the race being neutralized on the Silverstone circuit, July 3, 2022 Matt Dunham POOL / AFP

In addition, while the race was still neutralized, several people "attempted" according to the International Automobile Federation, to enter the track.

"These people were immediately removed and the matter is now being handled by local authorities," the FIA ​​said.

The operation was claimed by the climate activists of Just Stop Oil, a group which calls for an end to the exploration of fossil fuels in the United Kingdom.

"Five Just Stop Oil activists disrupted the British Grand Prix at Silverstone by trespassing on the track and sitting on it," the environmental group said in a statement.