Kyiv denounces the targeting of civilians .. Conflicting reports about the siege of Lyschansk and Russia bombing southern Ukraine

There were conflicting reports about the siege of Lyschansk, Ukraine, with the continuation of the battles around it. The Russian army stated that it bombed military targets deep in Ukraine, amid Ukrainian condemnation of the targeting of civilians and calls for more armaments to the West. 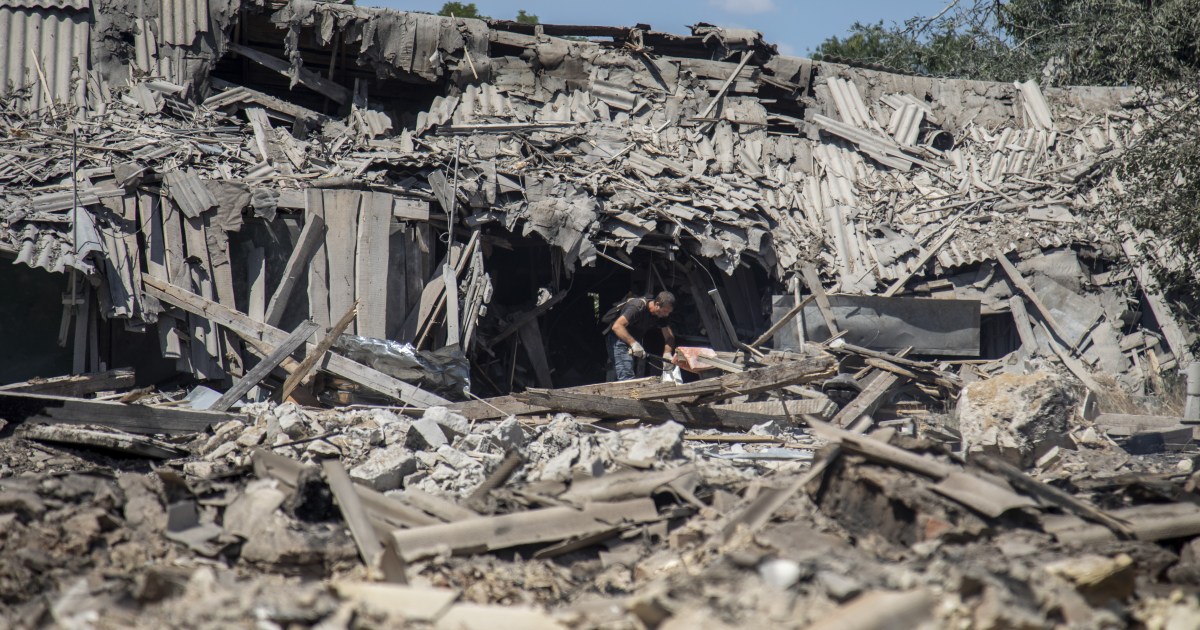 There were conflicting reports about the siege of the Ukrainian city of Lyschansk with the continuation of the battles in its vicinity, and the Russian army stated today, Saturday, that it had struck military targets with air strikes deep inside Ukraine, amid Ukrainian condemnation of the targeting of civilians and demands from the West for more armaments.

Andrei Maruchko, a representative of the separatist forces in Lugansk (pro-Russia), was quoted by the TASS news agency as saying that all the heights around Lysichansk had been captured, and that the city was completely besieged.

Vitaly Kiselev, who is also a representative of the separatists, told TASS that the fighters are "in the vicinity of the Shakhtar Stadium", located near the center of an important industrial city in the Donbas region, which before the outbreak of the conflict had about 100,000 people.

In turn, the President of the Russian Republic of Chechnya Ramzan Kadyrov broadcast video statements in which he confirmed the complete encirclement of Lyschansk, and the closure of all entrances and exits.

The Chechen president added, "It is expected that a large-scale attack on the city will begin soon."

On the other hand, Agence France-Presse quoted a spokesman for the Ukrainian National Guard, Ruslan Mozychuk, as saying that "heavy battles are taking place in the vicinity of Lyschansk, fortunately the city is not besieged and is under the control of the Ukrainian army."

Lyschansk is the last major city still outside Russian control in Luhansk, one of the two provinces of the Donbass industrial region in eastern Ukraine, which Moscow seeks to fully control.

Al-Jazeera correspondent in the Donbass region had reported that several fires continued to erupt inside the city of Lysichansk, and a number of nearby villages, due to the continuous Russian bombing of the city, and Ukrainian military sources confirmed that the Russian forces had brought in reinforcements to the city's vicinity.

The Russian Ministry of Defense denied the validity of statements made by the Ukrainian President’s adviser and Ukrainian journalists stating that the Russian Chief of General Staff, Valery Gerasimov, had been dismissed, and confirmed that he was carrying out his duties. The ministry also published photos of him inspecting his country’s forces participating in the battles.

The ministry said that he had heard the reports of the commanders of military operations and military officials on the conduct of the military operation, and noted that Gerasimov paid special attention to issues related to the use of automated combat control systems, in the context of enhancing offensive capabilities.

For its part, the Russian Defense Ministry said that 5 command posts of Ukrainian forces in Donetsk and Mykolaiv were destroyed by air strikes, in addition to ammunition depots in Zaporozhye.

It added that the raids destroyed two weapons depots near the city of Mykolaiv in southern Ukraine, and also destroyed a weapons depot near Kharkiv in the east.

And the authorities of the city of Pavlograd in central Ukraine announced on Saturday evening that the Russian forces were launching a violent attack on the city, calling on residents to immediately enter the shelters.

On the other hand, the Ukrainian army said that its forces destroyed gatherings of Russian equipment on the "Snake Island" in the Black Sea, adding that two Russian planes carried out two raids with phosphorous bombs on the island.

This came two days after the Ukrainian forces announced their recovery from the Russian forces, who said they withdrew from them to prove that they do not prevent the departure of grain ships from the ports of Ukraine.

Kyiv says that Moscow has intensified its missile attacks on targets far from the battlefront, and that it has deliberately bombed civilian sites, but Kremlin spokesman Dmitry Peskov previously said that "the Russian armed forces do not deal with civilian targets."

For his part, Ukrainian President Volodymyr Zelensky condemned on Friday night what he called deliberate intimidation by Russia and not just mistakes or accidental strikes, especially after 21 people were killed and 38 others wounded, including children, by Russian bombing of an apartment building and a tourist complex in the town of Sergeyevka, about 80 km away. From Odessa, southern Ukraine.

"I call on our partners to provide Ukraine with anti-missile defense systems as soon as possible. Help us save lives," Ukrainian Foreign Minister Dmytro Kuleba wrote in a tweet, describing Russia as a "terrorist state."

Yesterday, Friday, the Pentagon announced new military assistance worth $820 million, which includes up to 150,000 155-mm rocket-propelled grenades, new HIMARS launchers that have recently arrived on the battlefield, and advanced air defense systems "NASAMS". .

Norway also announced an aid of 10 billion kroner (about one billion euros).

On the diplomatic side, the Ukrainian Foreign Minister said that he discussed with the EU foreign policy chief Josep Borrell over the phone the steps after Ukraine became a candidate country for EU membership.

"We both agree on the need for the seventh EU sanctions package against Russia, and we are working on it," he added.

In our call today, @JosepBorrellF and I discussed further steps after Ukraine became an EU candidate country and coordinated positions ahead of the G20 Foreign Ministers meeting.

We both agree on the need for the seventh EU sanctions package on Russia and we are working on it.