Joining / not joining: why Kyiv cannot decide on a position on Ukraine's membership in NATO

Ukraine has no other alternative than to join NATO, said the head of the National Security and Defense Council (NSDC) of the country Oleksiy Danilov. According to him, the course towards integration is enshrined in the Constitution, and in order to abandon it, the basic law of Ukraine will have to be revised. At the same time, Danilov acknowledged that Kyiv does not have a unified position regarding the prospects for the country's membership in the bloc. Earlier, President of Ukraine Volodymyr Zelensky claimed that he had lost interest in this idea. Meanwhile, experts note that, despite the military support of Kyiv, the alliance openly declares that there is no desire to accept Ukraine into its ranks. At the same time, analysts admit that NATO's views may change overnight if it suits their current situation. 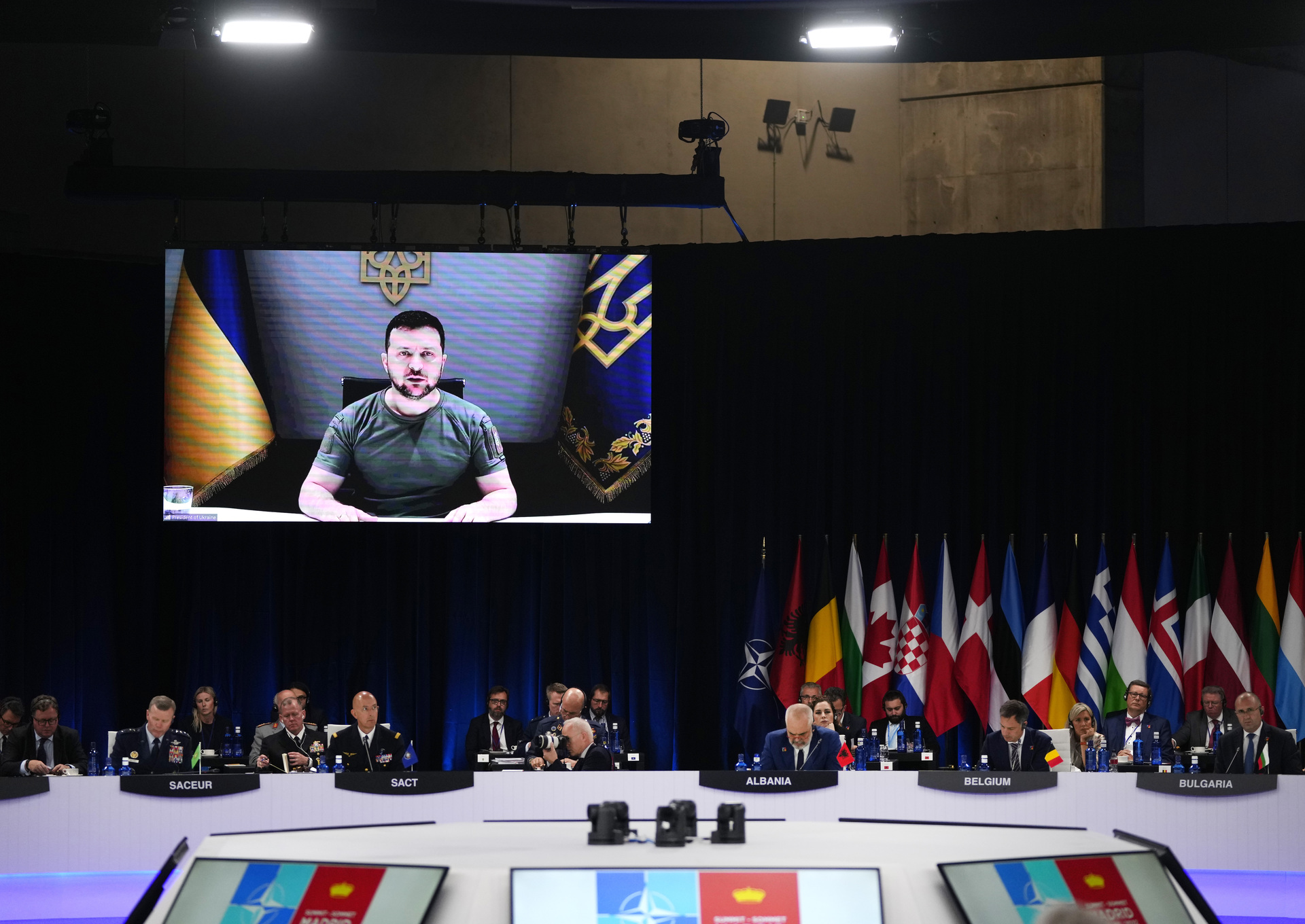 “There is no alternative to Ukraine’s accession to NATO,” Secretary of the National Security and Defense Council (NSDC) of the country Oleksiy Danilov said on the air of the NTA TV channel.

“There is no other option for us today.

Moreover, this option is written in our Constitution ... If someone wants to change this situation, you need to understand that then it will be necessary to change the Constitution, ”he said.

At the same time, Danilov noted that in Kyiv there is no single position on this issue, therefore “everyone must answer” for his own words.

Recall that the course towards Ukraine's entry into NATO was enshrined in the country's Constitution in February 2019 at the initiative of Petro Poroshenko, who at that time served as president of the country.

In the preamble of the basic law of Ukraine, the wording about "the European identity of the Ukrainian people and the irreversibility of the European and Euro-Atlantic course of Ukraine" appeared.

Adherence to the chosen course was constantly emphasized in Kyiv and demanded from Brussels not to delay the inclusion of the country in the North Atlantic bloc.

However, despite President Zelenskiy’s demand to speed up the country’s admission to NATO, the only step in this direction in recent years has been the granting of Ukraine the status of a NATO Enhanced Opportunities Partner in 2020.

The absence of specific promises from the alliance and its position of refusing to directly intervene in the confrontation between Ukraine and Russia after the start of the special operation somewhat corrected Kyiv's rhetoric.

On March 8, Zelensky said in an interview with ABC News that he allegedly lost interest in the idea of ​​​​Ukraine joining NATO.

In turn, the Speaker of the Parliament, Ruslan Stefanchuk, on March 18, on the air of the 1 + 1 TV channel, admitted that the country's leadership could completely revise the clause of the Constitution on integration into the alliance, if such a need arises.

And at the end of March, the Ukrainian delegation at the talks in Istanbul even handed over to the Russian side a draft treaty, which included a clause on the non-bloc status of the country and on the refusal to deploy foreign military bases and troops on its territory.

The refusal of the Ukrainian authorities to speed up the issue of joining the alliance in an interview with the Financial Times on June 25 was confirmed by the deputy head of the office of the President of Ukraine Ihor Zhovkva.

“NATO members denied us our desire (to become a member of the alliance. -

We will refrain from taking any steps in this direction,” the official said.

A few days later, in a comment to Bloomberg, Zhovkva was forced to admit that the bloc was already directly talking about the unwillingness to accept Ukraine into its ranks.

“You are not a member (of the alliance. -

), because we don’t need you,” Zhovkva complained.

At the same time, as experts note, there is still no single position in Kyiv in relation to the country's membership in NATO.

Thus, the head of the Ukrainian Foreign Ministry, Dmitry Kuleba, in an interview with the French radio station RFI on June 29, said that the country does not abandon its intention to join the bloc, although the speed of this process does not depend on it.

“Accession to NATO is provided for by the Constitution of Ukraine, but for Ukraine to join NATO, one desire is not enough, it is necessary that NATO also wants it.

But, as far as NATO is concerned, since the beginning of the war, the organization has never given a sign in favor of integration,” the minister said.

On the same day, Volodymyr Zelenskyy, in an address to the participants of the North Atlantic bloc summit, considered it necessary to recall that the countries of Eastern Europe have always advocated granting Ukraine membership in NATO.

“NATO's open door policy should not be like the old Kyiv metro turnstiles: they are open, and when you come in, the turnstiles close until you pay.

Has Ukraine not yet paid enough?

Is our contribution to the defense of both Europe and the whole of civilization still insufficient?

In this regard, Zelensky demanded from the alliance not only security guarantees for the country, but also a place "in a common security space."

"And there was no talk"

Despite the open door policy declared by NATO, not everyone in the bloc really wants to see Ukraine in its ranks.

NATO Secretary General Jens Stoltenberg spoke about the lack of consensus on this issue among the members of the alliance back in November last year.

In turn, German Chancellor Olaf Scholz said on March 3 in an interview with the German ZDF TV channel that not accepting Ukraine into the ranks of the alliance "was the right decision."

And the head of European diplomacy, Josep Borrell, in an interview with TF1 on March 10, completely admitted the fallacy of Western promises to Ukraine regarding integration into NATO.

“There were moments when we proposed steps that we probably were not actually able to put into practice, including, for example, a promise to take Ukraine and Georgia into NATO, which was never done,” he said.

Once again, the absence of plans to provide Ukraine with a place in the ranks of the alliance was confirmed by British Prime Minister Boris Johnson.

On June 30, at a press conference in Madrid, where the alliance summit was held, he said that Ukraine's entry into NATO "in the near future was never even close to possible."

“There was even no talk of Ukraine joining NATO in the foreseeable future.

It was completely unrealistic, ”the politician emphasized.

Focusing on the agenda

Experts interviewed by RT agree that Kyiv's lack of a single line regarding the prospects for Ukraine's entry into NATO is due to the constantly changing military-political agenda.

“The position of the Ukrainian authorities is influenced by the development of the military-political situation in the country and the instructions they receive from NATO and the United States.

Depending on this, the position of Kyiv constantly fluctuates, in connection with which we see diametrically opposed statements from the establishment.

So all these “joining / not joining” arguments are purely tactical in nature, ”Sergey Ermakov, a leading expert at the RISS Research Coordination Center, explained in an interview with RT.

According to him, the instructions that he receives from Western partners play a decisive role in determining the mood of Kyiv.

“Some Western politicians make it quite clear that Ukraine is not expected in the alliance.

Moreover, they have already seen from practical experience that the status of the country is a red line for Russia, and European politics still do not want to further aggravate relations with Moscow, ”the analyst said.

At the same time, Yermakov admitted that NATO's views on Ukraine's membership may change over time if this is in the interests of the bloc.

“Details and nuances are important here.

After all, NATO is not abandoning the open door policy, although it is in no hurry to distribute a pass to its ranks to everyone who wants it.

In this regard, the results of the Madrid summit are indicative, where it was confirmed that NATO intends to continue expanding and will proceed in this matter for reasons of expediency,” the expert noted.

At the moment, Ukraine is not of interest to the alliance as a member of NATO, since the bloc is quite satisfied with its role as a buffer zone between it and Russia, Yermakov said.

However, once NATO promised Russia not to expand to the east and did not keep its word, the expert recalled.

“So hypothetically, this situation could arise again.

No one gives guarantees in the alliance on the non-alignment of Ukraine.

On the contrary, anti-Russian activity on its territory was only intensified.

And this is one of the reasons why Russia launched its special operation in Ukraine: we cannot allow a repetition of the situation that threatens our security,” Yermakov concluded.