India: thousands of pilgrims revere the menstruation of their goddess

Once a year, thousands of devotees flock to Assam, a state in eastern India, to celebrate the menstruation of the goddess Kamakhya. During this cult, they smear themselves with blood-red powder... 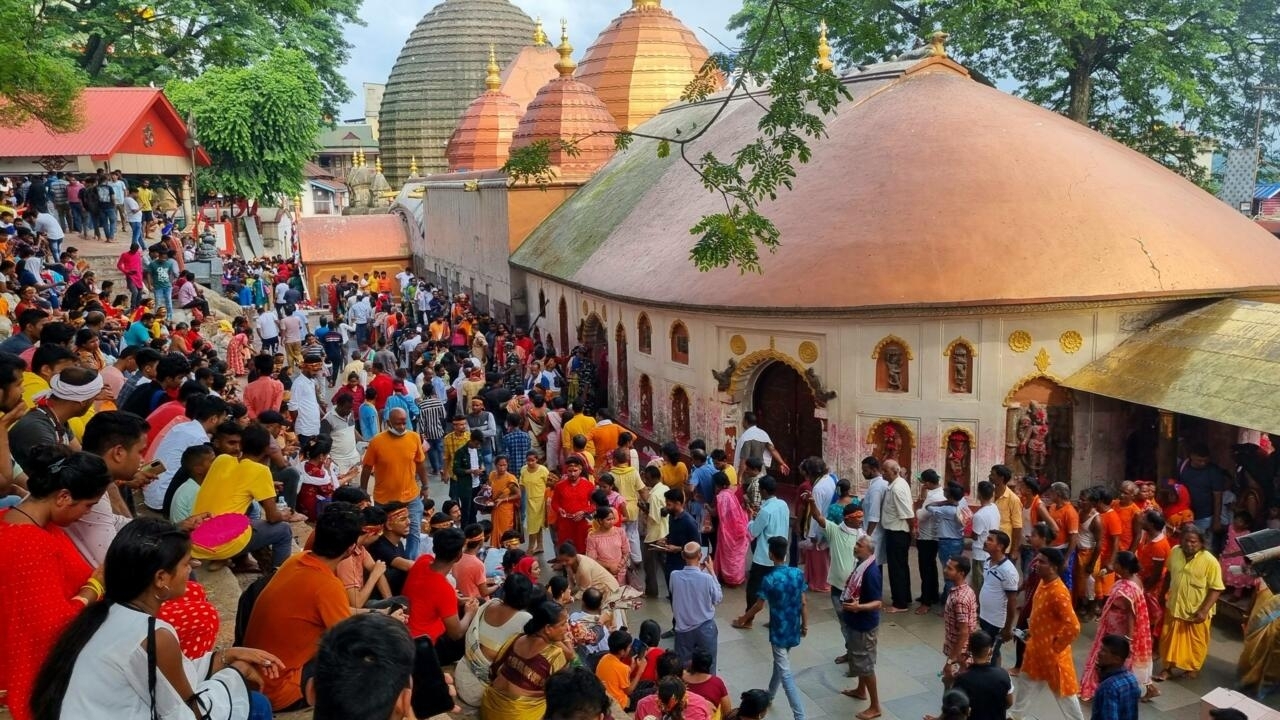 India: thousands of pilgrims revere the menstruation of their goddess

Once a year, thousands of devotees flock to Assam, a state in eastern India, to celebrate the menstruation of the goddess Kamakhya.

During this cult, they smear themselves with the blood-red powder deposited on his genitals.

An iconoclastic ceremony in India, where the rules remain a taboo.

At the foot of the Nilacal hill, tens of thousands of pilgrims protect themselves from the heat and the rains under large tents, before the long-awaited day.

Two years in a row, the ceremony was canceled because of the Covid ,

I can't wait to receive Mother Kamakhya's blessing to fight my health problems.

Sunday at dawn is the whistle of this mela (Hindu pilgrimage) unique in India.

The devotees begin in joy a climb of 5 kilometers to the temple of Kamakhya, wife of the god Shiva, better known under the name of Parvati.

Their grail: to obtain a piece of the red sari of the goddess which will be torn and distributed to the followers of the cult.

According to legend, Kamakhya's body was separated after his suicide into 51 pieces spread all over India and his vagina landed on this hill.

This makes the place the most powerful temple in India dedicated to Shakti, the feminine energy.

The end of June marks the period of Kamakhya menstruation.

The giant river of Brahmaputra, which flows at the foot of the hill, is then colored, still according to the legend, in red.

A woman coats herself with red powder, symbol of the menstruation of the goddess Kamakhya in Assam on Sunday June 26 © RFI / Côme Bastin

Perhaps under the effect of the giant monsoon, the Brahmaputra has more the color of mud... "

In reality, the rules and the rain are one during this festival called Ambubachi, or the arrival of the rules of the Earth"

Water fertilizes the soil just as menstruation is the source of life.

Followers of the Kamakhya cult crowd en masse into the temple whose foundations date back to the 10th century.

In the main crypt, we rush in front of a wet stone cracked in two which represents the vagina of Kamakhya, “

the one whose name is love

Around the main altar, representations of the goddess's crotch are carved in stone.

People line up there to smear their foreheads with the red powder that rests there.

“It is the only temple in India where the vagina of women is venerated, that is to say the source of life”

He proudly holds up the two centimeters of red Kamakhya sari he was able to obtain.

So it's a celebration of femininity in general

,” judges this Hindu ascetic and mystic… before trying to sell us a piece of his fabric.

This baba was able to recover a piece of the blood red sari from Kamakhya in Assam on Sunday June 26th.

The women also take over the premises, their foreheads covered in red.

Some light candles and others maintain fires in honor of the goddess to solve, sometimes, a problem of infertility.

Many feel closer to Kamakhya than other male gods.

They have embraced this current of tantrism which gives pride of place to the female body while it most often revolves around the sperm of the god Shiva.

The researcher warns against an overly contemporary reading of the cult.

Here we venerate the Kumari, prepubescent girls who represent Kamakhya… the time of a ritual because they are precisely never impure.

But be careful, specifies Émilie Arrago-Boruah,

“as everywhere where blood is taboo, it is also a magic fluid!

Apart from this giant pilgrimage, the temple of Kamakhya would be the scene of mysterious practices.

The communities of women who live year-round around the sanctuary sing choirs linked to female desire.

It is also said that certain sects encourage the consumption of alcohol and meat, usually prohibited in Hinduism, to reinforce certain powers during orgiastic ceremonies.

It is difficult to know if these cults persist.