He does not like to appear and public meetings.. A reading of the first public speech of the Taliban leader at the "Loya Jirga" meeting

More than 10 months after the Taliban movement came to power in Afghanistan, the movement's leader, Mullah Hebatullah Akhundzadeh, appeared at a meeting of religious scholars in Kabul, and explained his position on the fundamental and thorny issues in Afghanistan. 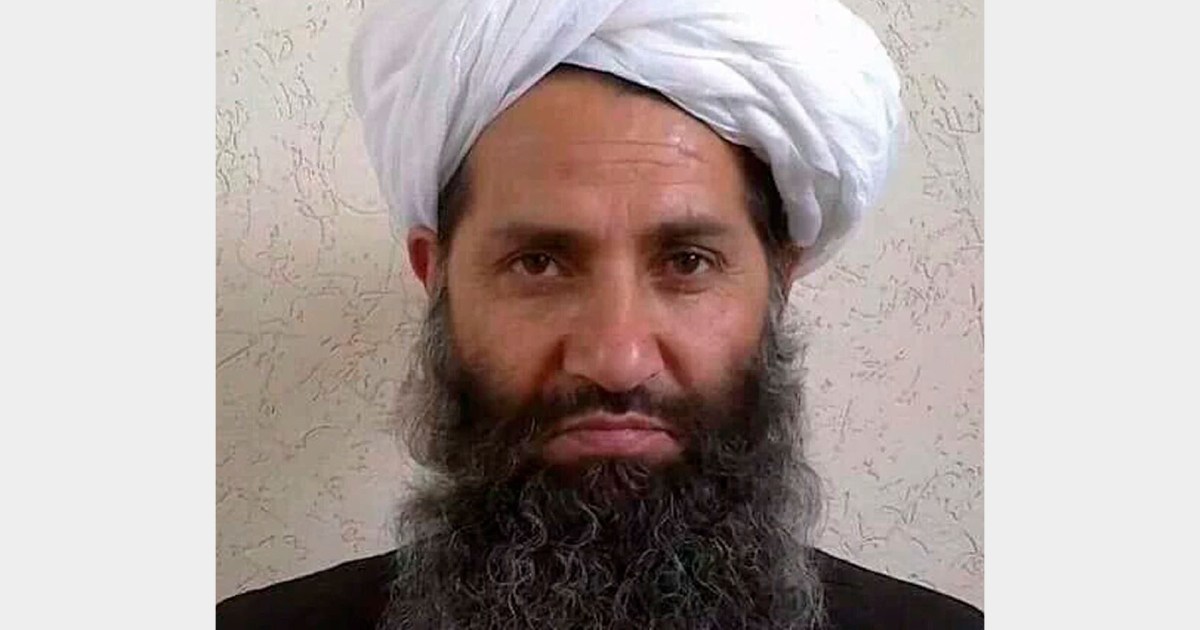 More than 10 months after the Taliban movement came to power in Afghanistan, the movement's leader, Mullah Hebatullah Akhundzadeh, appeared at a meeting of religious scholars "Loya Jirga" in the Afghan capital, Kabul, and in his first public appearance since his appointment as leader of the movement in 2016. The Taliban leader to explain his position on the core and thorny issues in Afghanistan.

Wahbatullah Akhundzada, 55, is one of the founding members of the Taliban movement, and was a close aide to the movement's founder, Mullah Muhammad Omar. On May 25, 2016, the movement announced the selection of the movement's Shura Council, Akhundzada, as its leader after the assassination of Mullah Akhtar Muhammad Mansour.

During the past months, the Taliban leader's failure to appear in the media or in public meetings raised many questions about the reasons for his avoidance of appearing despite the withdrawal of foreign forces in the summer of 2021.

But the appearance of Akhundzadeh in the Kabul meeting and among the scholars denied reports that have been spoken for a long time that he does not exist, and that there is another person running the government in Afghanistan.

The leader of the Taliban movement arrived at the "Loya Jirga" during the speech of his deputy and acting Afghan Interior Minister Sirajuddin Haqqani, who broke off his speech minutes after his arrival.

The speech of the leader of the Taliban movement lasted an hour and 10 minutes, and he spoke in the Pashto language, and it appears from the style of delivering the speech that he spoke impromptu, and appeared in the image of the preacher or the Friday preacher, and the tone of his voice indicated his seriousness in raising issues.

Akhundzada, who lives in Kandahar, southern Afghanistan, is rarely photographed. With the exception of one picture whose time and place is unknown, there are no other pictures of the man, and the movement did not publish any picture of Akhundzada during his participation in the meeting of scholars in Kabul, and state television only broadcast his speech in the form of a file. My voice.

The leader of the movement touched on several topics, which have a direct relationship with the government formed by the Taliban after the American withdrawal from Afghanistan. Mullah Akhundzada also urged the leadership of the Taliban movement and government officials to maintain unity that ensures the continuation of the movement's rule, and demanded that they be fair in conducting the work of the government and combating corruption. .

Researcher and political analyst Tariq Farhadi says that the Taliban leader's speech was frank about the facts on the ground, and his apology to those who were killed and wounded in the attacks carried out by Taliban militants is very important.

In an interview with Al-Jazeera Net, Farhadi added that Afghanistan is heading for international isolation due to the Taliban's rule, and it must review its policy towards domestic and international issues.

A copy of the pledge of allegiance of 3,500 scholars and delegates from all regions of Afghanistan together with the Commander of the Faithful Sheikh Hebatullah Akhundzadeh as the Emir of the country of the Afghans.

The main contents of the speech

Akhundzadeh believes that the Taliban's rise to power in Afghanistan has made the Muslim world happy, but the leaders of Islamic countries think only of their personal interests and have forgotten the desires and hopes of Muslims.

During his speech, the Taliban leader accused Western governments of not wanting Afghanistan to be independent, after its defeat and its exit from the country after 20 years of military occupation, trying to stir up sedition.

The leader of the movement ruled out the participation of all those who worked with previous governments for the past two decades, saying it is enough that we have forgiven them, but this does not mean that we will provide them with an opportunity to join the government, considering this a betrayal of the blood of the martyrs, he said.

According to Akhundzadeh, the Taliban's war with the United States and NATO was not for the sake of gaining power or collecting money, but rather a war for the sake of Islamic principles and values, stressing that the war with the infidels has not ended but will continue until the Day of Resurrection and that the application of the legitimate borders by the Islamic Emirate will be confronted. Many reactions at the global level.

Referring to his son, who participated in a suicide attack in the southern Afghan province of Helmand in 2017, and was killed, Akhundzadeh said that the Taliban made many sacrifices for the current situation to prevail in Afghanistan, adding that "the infidels are not happy with this achievement and our unity."

This item of his speech raised great questions, and a number of Afghan experts say that the Taliban movement has not changed, and that its interpretation of religion is traditional and does not take into account the new changes in Afghan society and neighboring countries.

Journalist Sami Yusufzai told Al Jazeera Net, "The Taliban leader has spoken frankly about the application of Sharia in Afghanistan, and that he does not want to receive orders from others about what is happening in Afghanistan."

. By God, if you collected all your atomic bombs, we would have been killed. We would not accept anything that would anger our Lord.

We are independent and free, and the world must not impose their orders on us. Who are you to order us

? Who are you to interfere in our internal affairs #Scholars_Conference pic.twitter.com/GXpMD2EkSs

What the leader did not mention

The speech of the leader of the Taliban movement, which lasted for more than an hour, ignored the talk about the participation of political parties in governance, the establishment of the new constitution for the country, in addition to his country's relationship with the United States and the international community.

Akhundzada also ignored talk about the role of Afghan women, and the Taliban leader did not mention girls' education and women's rights in his speech.

Nor did he mention the government's economic programs, development projects, providing the basic needs of Afghans and combating unemployment.

Writer and political researcher Abdul Jalil Karimi told Al Jazeera Net, "We were waiting for the Taliban leader's word with great patience, because he would talk about new and important matters for Afghanistan, such as relations with the United States and international recognition of his government, opening girls' schools and the role of women, but he did not address these issues that he wanted." The international and Afghan community, and his word came to arrange the internal house only."

Experts in Afghan affairs believe that the Taliban leader's speech revealed differences between leaders and senior officials, so he focused on unity, noting that there is a clear contradiction in the speech of the Taliban leader and other leaders.

Political researcher Najib Azad told Al Jazeera Net, "When you hear the words of Defense Minister Mullah Muhammad Yaqoub and Interior Minister Sirajuddin Haqqani, you will notice a big difference, as we saw that they were open to Afghan society, and demanded the integration of technical cadres from the previous government in their government and joint work, but the leader of The Taliban rejected everything we heard from other leaders, and this means that the difference within the movement will be severe."