Claiming China is a "systemic challenge", contradictions and entanglements in NATO's mind

China News Service, Beijing, July 3rd: Claiming that China is a "systemic challenge", contradictions and entanglements in NATO's heart   Author: Zhang Mingxin   The three-day NATO summit ended in Madrid, the capital of Spain.   The biggest outcome of the summit was a "strategic concept paper" outlining NATO's priorities for the next 10 years. On June 29, local time, NATO leaders took a group 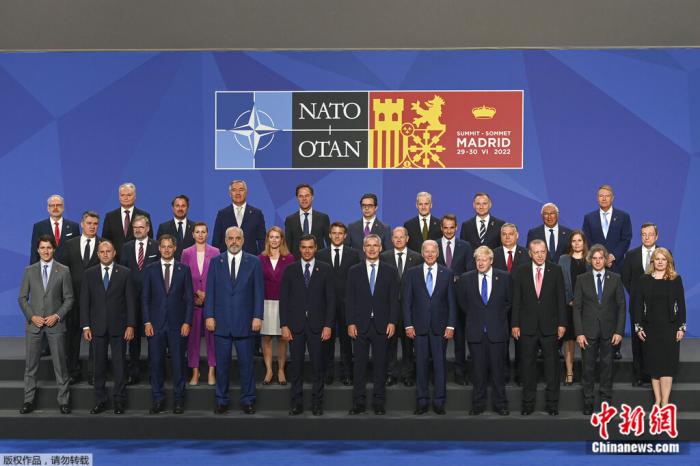 The three-day NATO summit ended in Madrid, the capital of Spain.

The biggest outcome of the summit was a "strategic concept paper" outlining NATO's priorities for the next 10 years.

Russia and China, though absent, are everywhere.

In the 10-page document, one became a "threat" and the other a "challenge."

I have to sigh that time has changed.

Keep in mind that China was not mentioned in the last version released in 2010, when Russia was also called a "partner".

After 12 years, Russia has once again returned to the opposite side of NATO, becoming the "most important and immediate threat" to the security of NATO member states.

And China has also become the first country to appear in NATO's so-called "strategic concept document" geographically far away from a NATO member state.

NATO, a self-proclaimed defensive organization, framed China as a "systemic challenge" and said it was still willing to engage in "constructive engagement" with China.

Two attitudes are presented in one report, what is NATO's intention?

It is reported that the 2022 strategic concept sets three core tasks for NATO in the next decade: deterrence and defense, crisis prevention and management, and cooperative security.

In addition to the unremarkable core mission, "China" appears frequently in the document.

Singapore's "Lianhe Zaobao" commented that, for NATO, the inclusion of "alignment statement" in the strategic concept has undoubtedly been a major breakthrough.

NATO Secretary-General Stoltenberg emphasized in an interview with German magazine Der Spiegel, "China is not an opponent of NATO, but the rise of China is a challenge to NATO's interests, security and value."

The irony is that from a geographical point of view, China and NATO allies are 108,000 miles away, and there is no border between the two countries. The two closest points are in a straight line distance and need to cross the Eurasian continent to reach them.

Why does NATO, which calls itself a "defensive organization", see the peaceful rise of a sovereign state as a challenge?

"Although China and NATO are geographically separated, in NATO's perception, China still poses challenges in some areas." Cui Hongjian, director of the European Institute of the China Institute of International Studies, told Chinanews.com.

"NATO's understanding of security mainly has two dimensions, one is the geographical dimension, the other is the domain dimension, and the expansion rate of the latter is much higher than the former." Cui Hongjian said, "NATO believes that in cyberspace, technological competition, arms control Security issues in areas such as climate change and climate change push geographic boundaries.”

Cui Hongjian pointed out that China has always adhered to the path of peaceful development and a defensive national defense policy, and has always been a builder of world peace, a contributor to global development, a defender of international order, and a provider of public goods.

These Chinese wishes on security just prove that China does not pose a "systemic challenge" to any country or organization.

At present, NATO's positioning towards China is largely influenced by US competition with China.

Cui Hongjian believes that China's rapid development has triggered the so-called "hegemonic anxiety" of the United States, making it natural to regard China as a competitor, thus further promoting NATO to cooperate with the United States' China strategy.

In this updated strategic concept paper, there are 49 paragraphs, of which paragraphs 13 and 14 focus on depicting China.

NATO described China as a "systemic challenge" in the front, and then said in the back that it was still willing to engage in "constructive engagement" with China.

On the one hand, they were afraid and guarded, and on the other hand, they wanted to get close, and the two faces of NATO appeared impressively.

"NATO actually wants to follow the old routine of handling relations with Russia before, to find a balance point in the cognition of China, to strengthen its security prevention and containment on the one hand, and to adopt a contact strategy on the other hand to propose dialogue to China. "Cui Hongjian's analysis believes that NATO's "two faces" is actually its usual method.

Cui Hongjian said that in NATO's imagination, "systemic challenges" from China need to be dealt with in a long-term and comprehensive manner, and "dialogue" under the pretext of "enhancing military transparency" can also become a tool for NATO to export its values ​​and systems.

"NATO also wants to put pressure on China diplomatically by proposing dialogue: if China is unwilling to talk to it, it can put the blame on China," Cui Hongjian said.

From this slightly contradictory document, it can also be seen that there are still differences among NATO members on how to treat China.

American media analysis believes that some European member states still "love" Russia, while the United States, which is trying to "master" in NATO, regards China as its biggest competitor.

The biggest factor preventing these European members from being tough on China is the economy - they have close trade ties with China and cannot cut ties.

For example, China has been Germany's largest trading partner for six consecutive years.

Cui Hongjian also believes that NATO regards China as a "challenge" that European countries can accept rather than a "threat" that the United States is more willing to promote, which itself is already a product of balance and compromise among its member states.

A real threat to the international order

The spokesperson of the Chinese mission to the EU said on the evening of June 29 that NATO, as a product of the Cold War and the world's largest military alliance, has not changed its thinking and practice of creating "enemies" and engaging in camp confrontation 30 years after the end of the Cold War.

NATO's so-called "strategic concept paper" claims that other countries bring challenges, but in fact it is NATO itself that is causing trouble around the world.

Why did NATO become the NATO it is today?

Cui Hongjian pointed out that, on the one hand, NATO is a product of the Cold War. After the end of the Cold War, NATO's existence gradually transitioned to politicization, thereby further instilling its "values" in the world.

On the other hand, NATO's view of security is that of collective security, which is more applicable during the Cold War than in the current era of globalization.

NATO's attempt to create an exclusive clique goes against the world trend.

Taken together, NATO's two faces actually reveal that its internal opinions and interests are not truly aligned.

The China-related expressions in NATO's so-called "strategic vision" are actually the US wanting to use this platform to point fingers at China on the international stage.

And NATO, as a "hegemonic tool that serves the United States," is the real threat that tries to challenge the international order.

Chinese Foreign Ministry spokesman Zhao Lijian pointed out on June 30 that hyping up the so-called "China threat" is completely futile.

NATO should immediately stop groundless accusations and provocative remarks against China, abandon the outdated Cold War mentality and the outdated concept of zero-sum game, abandon the wrong practice of superstitious military force and seeking absolute security, and abandon the dangerous act of disrupting Europe and the Asia-Pacific. What it does is to do something good for the security and stability of Europe and the world.