With delivery around the country and the world: how Ukraine sells NATO weapons on the darknet

As RT found out, the unprecedented supply of foreign weapons to Kyiv led to the formation of illegal marketplaces in Ukraine - sites on the darknet where you can find an ad for the sale of the Javelin anti-tank complex or advanced Phoenix Ghost loitering ammunition. RT contacted the sellers of unique goods and offered to make a deal. 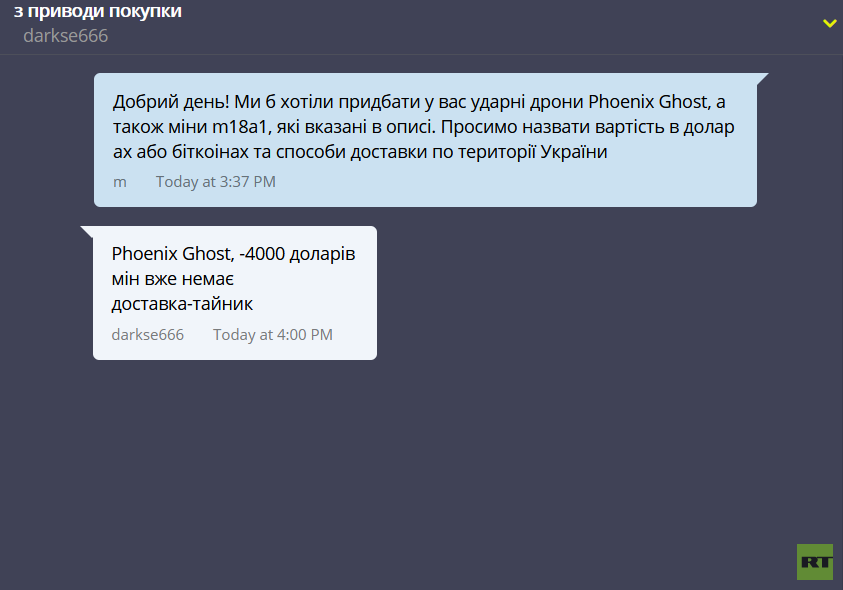 On one of the Ukrainian illegal online sites visited by RT as part of the experiment, offers to purchase foreign weapons with delivery across Ukraine and even abroad have recently begun to appear frequently.

This is not only about light small arms: the assortment includes, for example, Javelin mobile anti-tank systems supplied to Ukraine by the United States and its allies as part of various military aid packages.

But not only that.

They are ready to give into private hands, for example, the latest American drone Phoenix Ghost, the so-called loitering ammunition, developed in the United States specifically for the needs of the Ukrainian military.

RT was able to contact anonymous Ukrainian arms dealers and order the purchase of Phoenix Ghost complexes, as well as a batch of American M18A1 Claymore anti-personnel mines, which also appeared on the lists of weapons supplied to Ukraine.

As follows from the correspondence, Phoenix Ghost drones are offered for $4,000 apiece, but it is no longer possible to purchase mines.

Delivery is carried out through a system of certain caches, and not only on the territory of Ukraine, but also in other countries.

RT suggested that gun sellers indicate the account number of the crypto wallet to which money should be transferred to purchase the Phoenix Ghost.

As it turned out, payment could be made directly on the marketplace, which acts as a guarantor of the transaction.

The sellers confirmed their readiness to place the ammunition in the cache after payment and report its coordinates.

In the course of further correspondence, we asked the Ukrainian arms dealers if they could deliver the Phoenix Ghost to the territory of Poland - for example, to the border town of Przemysl.

As it turned out, this option is possible, however, for an additional fee of $1,000.

Delivery to Poland, by the way, with such a not too high price for transportation may indicate that illegal traders have established contact with border guards.

The cache itself, as it turned out, is just a “dig in the forest” with the coordinates of the place and its photograph.

As emphasized by the seller, the scheme will be similar to that used in the transfer of drugs.

On the same online platform, RT spoke with another seller under the pseudonym weapons ukraine.

The assortment also includes American M4 rifles with a silencer and a hundred rounds of $2.4 thousand per set.

If suddenly Phoenix Ghost does not suit you with something, this is not a reason to be upset.

In the Ukrainian darknet, you can also pick up its closest analogue - the Switchblade drone in the 600th version.

You can buy for $7 thousand apiece, but the seller has only two sets left.

The Switchblade 300 modification is already offered cheaper - for $4,000. Three kits are available.

You can buy a lot of hand-held anti-tank grenade launchers from the same seller.

In particular, the famous and actively advertised British ATGM NLAW is offered for $15,000 by the Armed Forces of Ukraine. But the German Panzerfaust 3 costs only $670 apiece.

Needless to say, the offer of less advanced weapons on Ukrainian illegal marketplaces is even more diverse.

In particular, on one of the relevant portals, automatic rifles are offered for purchase - copies of the AK-47, under its own cartridge, as well as various modifications of the classic American M-16 automatic rifle, including one of the latest - Brownells BRN-180.

Large-scale and sometimes uncontrolled by the West itself supplies of weapons, ammunition, food humanitarian aid to Ukraine lead to the growth of the problem of resale of equipment on the black market.

This is forced to admit even the official Ukrainian authorities and law enforcement agencies.

So, for example, the SBU reported that they managed to prevent the sale of about a thousand body armor intended for the needs of the Armed Forces of Ukraine in one of the hypermarket chains in the Lviv region.

A little earlier in Lviv, but already by the Ukrainian National Police, another channel for the sale of ammunition for the Armed Forces of Ukraine was stopped - it was about helmets and bulletproof vests in the amount of 550 thousand hryvnias.

Another, no less interesting scheme for profiting from the supply of arms and humanitarian aid was already revealed in Dnepropetrovsk (modern Dnieper).

There, a resident of the city, who fled to Europe after the start of the SVO, established a scheme for the supply of military goods to Ukraine, which was paid for by various volunteer public organizations.

The crafty Dnepropetrovsk resident then resold the equipment imported from Europe, allegedly for the needs of the Armed Forces of Ukraine, at exorbitant prices on various Internet sites.

There are many such examples.

The problem of trade in ammunition and humanitarian aid has become so widespread that Ukrainian journalists have begun issuing special memos on how an ordinary citizen can identify humanitarian aid on sale and what number to report to the SBU about such facts.

The situation with the distribution of humanitarian aid from international partners is even more depressing.

Thus, even the Deputy Head of the Office of the President of Ukraine, Kyrylo Timoshenko, was forced to admit at the Congress of Local and Regional Authorities that out of the total amount of humanitarian aid that reaches Ukraine, only 18% goes directly to the regional military-civilian administrations.

The rest simply dissolves somewhere in the warehouses of public, charitable and even religious NGOs.

As the owner of the Internet-Rozysk company, Igor Bederov, said in an interview with RT, the flow of foreign weapons from the warehouses of the Armed Forces of Ukraine to the black market is natural and due to the peculiarities of Ukraine as a state.

“Any military actions level control, especially since Ukraine has historically been a transshipment base and a black market for weapons.

There has always been a lot of European weapons.

There was a fairly liberalized market in terms of the purchase of weapons, including civilian ones, ”the military expert said.

According to Bederov, there are significant risks of heavy weapons falling into the hands of terrorists.

“This is quite true, given the fact that there are no levers of control.

Here, for example, foreigners brought their weapons: where did it go, how did it go?

Did they bring anything at all?

Bederov also points to the possibility of illegal trade in heavy weapons from warehouses, which Ukrainian military personnel declare destroyed as a result of the actions of Russian troops.

In any case, hostilities are underway, and it is much easier to hide the lack of various equipment, declaring it "dead" as a result of enemy actions.

Bederov also said that he did not rule out the spread of the illegal arms business to neighboring European countries.

“There is a fairly transparent border, and crowds of refugees, plus the need to deliver humanitarian supplies.

All this can theoretically be used and, as we remember from history, it has been used repeatedly for this kind of supply of illegal weapons.

A feature of the current moment is rather the “technological” nature of such business.

If earlier there were live intermediaries, now there is the Internet.

True, the share of fraudsters in this market is extremely high, according to some estimates - from 70% and more, ”concluded Igor Bederov.