After a stopover in Wuhan on Wednesday June 29, Chinese President Xi Jinping arrived this Thursday June 30 in Hong Kong, where he is taking part in the ceremonies of the 25ᵉ anniversary of the handover of the city to… 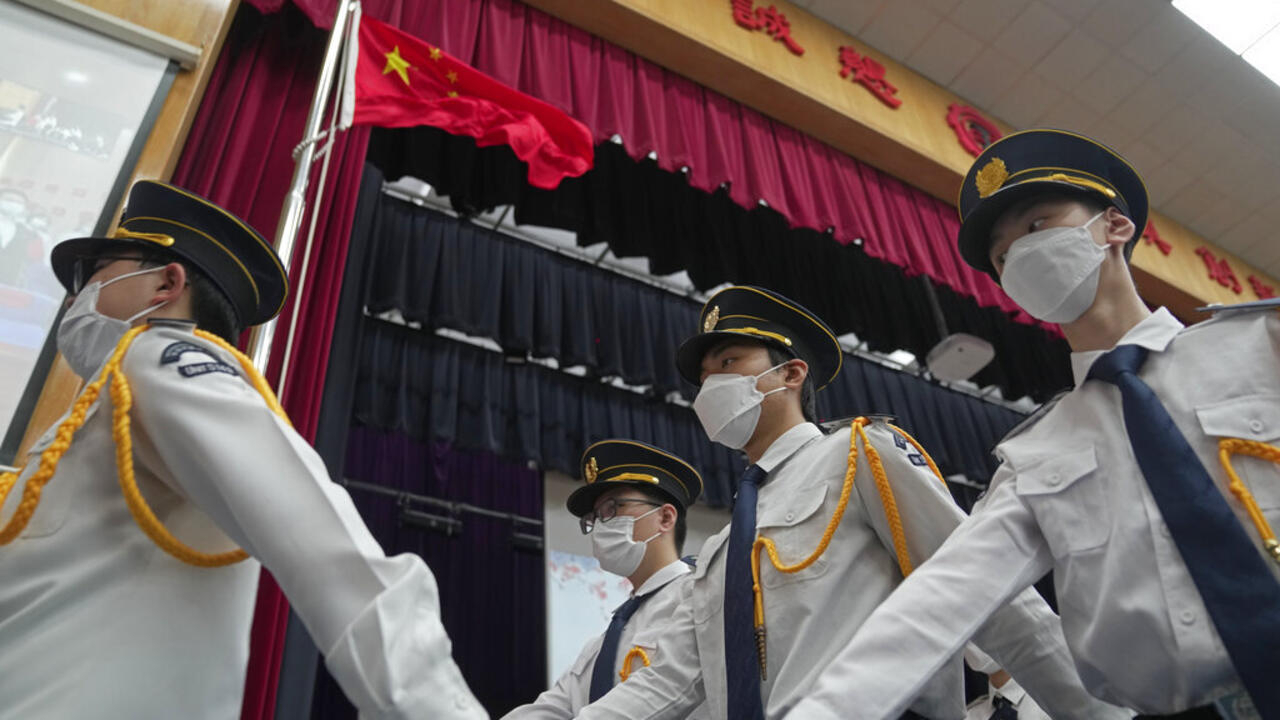 Raising the Chinese national flag at a secondary school to mark the 25th anniversary of Hong Kong's handover to China on Thursday, June 30.

After a stopover in Wuhan on Wednesday June 29, Chinese President Xi Jinping arrived this Thursday June 30 in Hong Kong, where he is taking part in the ceremonies for the 25th anniversary of the city's return to China.

An anniversary celebrated with fanfare by the state media.

School choir in uniform, symphony orchestra, but also pop and cinema celebrities are mobilized for this 25ᵉ anniversary.

In recent days, propaganda has brought out the trumpets of patriotism.

All the media sing with one voice the love of the fatherland as it should be, but also the "

" of relief of happy Hong Kongers, necessarily happy, according to these same official media, to have returned to the bosom of the motherland and emerging from the "

Among the celebrities who speak in the mainland media, the Hong Kong actor Zheng Zhiwei claims to have burst into tears when he saw the two ideograms of the word “China” written for the first time on his passport.

To patriotic converts, the grateful party.

At 68, Zheng Zhiwei is one of the few public figures who have supported the national security law imposed by Beijing.

“It was like a ray of light in the darkest hours,”

He has since been promoted to Deputy General Manager of TVB Hong Kong Television.

Much younger, Wang Yibo also goes there with the same refrain.

In a song titled "

" in English and broadcast during a special anniversary online concert, the singer, actor, rapper, television host and racing motorcycle rider recalls that China has stood up, its eyes attached to the stars that are also found on the national flag.

Flags that we see everywhere at the moment, hung – spontaneously there too – at the windows of the residences, on the route that the officials will take;

or again, a few days ago, on the hoods of taxis parading red in the wind, in view of the July 1st celebrations.

Hong Kong taxis, carrying decals with the years from 1997 to 2022 and the Five-starred Red flags, paraded ahead of the 25th anniversary of the SAR's return to motherland on Tuesday.

Some covers draw on the Hong Kong repertoire.

, is a timeless classic of Cantonese pop.

Its adaptation for the commemorations comes with a clip showing the historical moments from the handover to 1997, which "

still make everyone's blood boil after so many years

Schools were also asked for this anniversary.

We had to repeat songs and slogans.

Some students even had to spend a few days in quarantine, as required by the sanitary procedure during official events.

3,000 guests have been isolated at the hotel ahead of the Chinese president's visit, the

Huang Chubiao Elementary School, near Hong Kong International Airport, asked parents if their children would do a “

”: students agreeing to self-isolate he hotel from June 23

will be able to welcome

” who will arrive from Beijing on June 30.

All related costs are borne by the local government.

"The legend written by all the Chinese",

must not suffer any dispute.

Any trace of the colonial past must also disappear, including the English-style goose step of the police.

From July 1, the Hong Kong police will parade in Chinese style.

The standard bearers will walk with guns to their chests and heads held high, state media say.

Enough to make the patriots of the keyboard shiver:

Seeing the Hong Kong police train in the Chinese march, I feel proud

quoted by the newspaper of the Chinese youth

No state media, however, dwells on the drastic security measures surrounding the anniversary ceremonies.

The Chinese president will make his journey closed loop with handpicked guests, and he will not spend the night in Hong Kong.

No line either on the calls to demonstrate opponents.

reborn from its ashes

It is the Chinese president's first trip outside mainland China since January 2020, due to the Covid-19 epidemic.

This trip takes place in a tense context and whose precise program is secret, reports our correspondent in Hong Kong,

Accompanied by his wife, Peng Liyuan

, all dressed in grey, President Xi Jinping arrived by fast train from Shenzhen, the big border city, in the middle of the afternoon.

elapsed since my previous trip, I have followed Hong Kong closely

,” he said during a brief speech given upon his arrival.

He then referred to the “

severe hardships that Hong Kong has encountered in recent years

”, direct reference but without naming them to the 2019 riots and the Covid-19 epidemic, the 5th wave of which was a disaster.

But Xi Jinping felt that Hong Kong had "

reborn from its ashes

The various neighborhoods he was to visit on Thursday afternoon and Friday morning were cordoned off with exceptional security reinforcements.

He notably went to the Xiqu center, a new theater intended for traditional Chinese performances.

This Thursday evening, a dinner is planned in the residence of the chief executive Carrie Lam, but strangely the Chinese president will return to mainland China for the night and he should return tomorrow morning at dawn for the sunrise ceremony. flag and enthronement of the new government.

But the schedule could still change, depending on the Covid-19 situation, and the route of Typhoon Chaba which has already triggered the first T1 alert level in Hong Kong.