In the spotlight: the consequences of the end of the constitutional right to abortion in the United States

Americas press review In the spotlight: the consequences of the end of the constitutional right to abortion in the United States Abortion rights activists Carrie McDonald (L) and Soraya Bata react to the Dobbs v Jackson Women's Health Organization decision which overturns the landmark abortion case Roe v. Wade before the United States Supreme Court on June 24, 2022 in Washington, DC. Getty Image 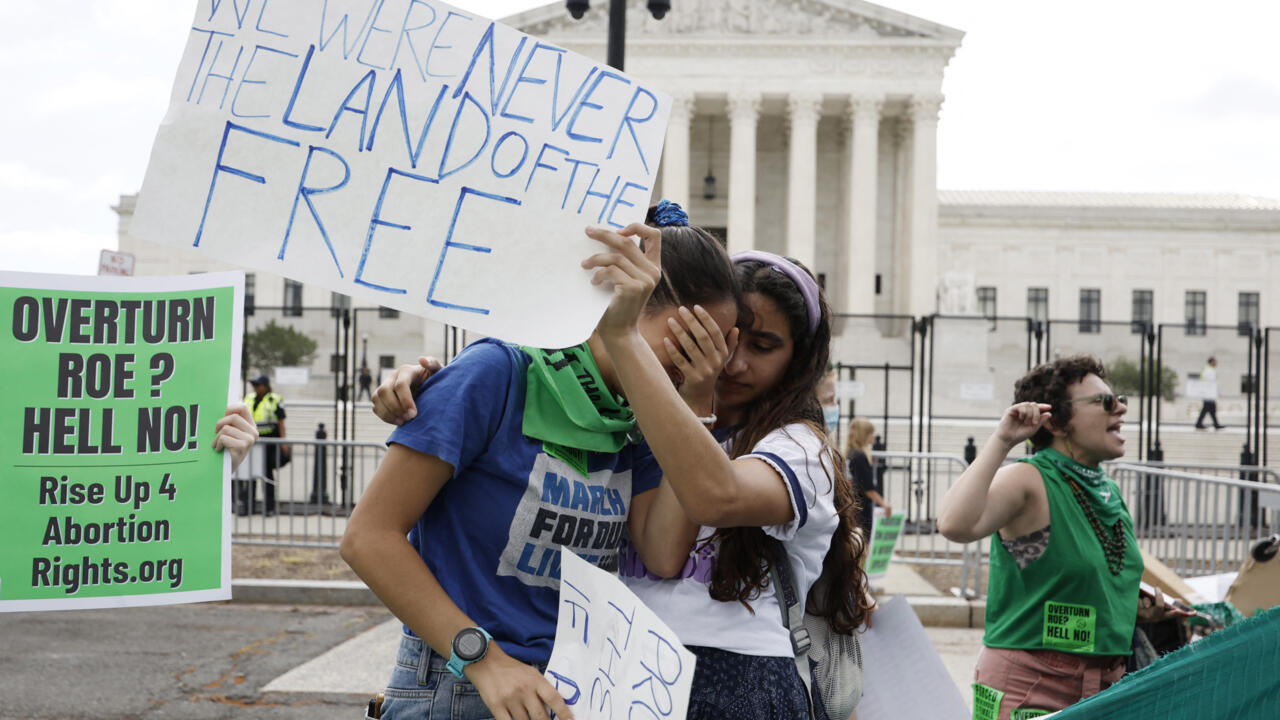 In the spotlight: the consequences of the end of the constitutional right to abortion in the United States

Wade before the United States Supreme Court on June 24, 2022 in Washington, DC.

raises this question this Thursday: women living in a state where abortion is now prohibited, will they be able to travel to another state for an abortion?

In the wake of the Supreme Court's decision on abortion, freedom of expression could also come under fire.

In states that prohibit abortion, will it still be possible to talk about it freely

: will women in these states have access to independent information allowing them to know the alternatives in states where abortion will always be accessible to them

The daily already anticipates the next legal battle: that to defend the first amendment on freedom of expression.

for its part, sees in vitro fertilization in danger: "

15% of couples in the United States cannot conceive children naturally

But here it is: in vitro fertilization generates millions of embryos, the overwhelming majority of which are not implanted in the mother's body, but destroyed.

a viable human egg fertilized in vitro is a legal entity that must not be killed.

Anti-abortionists have been fighting for decades for the status of person to be recognized for each embryo from its conception, recalls the

In Colombia, the government of President-elect Gustavo Petro begins to take shape

transform the Colombian economy, based largely on oil and mining extractivism, into an economy of agricultural production and eco-responsible tourism

In this context, the appointment of the Minister of Finance was eagerly awaited.

former Minister of Finance and Agriculture under other Colombian governments, famous university professor and former Executive Secretary of the United Nations Development Agency for 'Latin America and the Caribbean

Reactions in Colombia to this appointment have been glowing.

The prestige of José Antonio Ocampo is unanimous.

one of the most experienced economists in the country, a centrist whose appointment should largely reassure the markets which feared a radical socialist turn under Gustavo Petro

the finance minister of the outgoing Conservative government speaks of an “

Just like the centrist senator, Humberto de la Calle, for whom the new minister “

Another reassuring signal, sent by President-elect Petro: this meeting with the man who had hitherto been his sworn enemy, the former president of the hard right, Alvaro Uribe.

The photo of the two men sitting at the same table is on the front page of all the Colombian press.

This approach is driven by the vision of this leftist who wants to put an end to the politics of hatred, but also by a certain pragmatism, since the new president does not have a majority in parliament.

For the local newspaper of the city of Cali,

a direct channel between the new president and his predecessor, Alvaro Uribe

”, still very influential in the country.

The two men declared after this first tete-a-tete that they wanted to maintain the dialogue that had been started.

First storm of the hurricane season

Central America is on high alert.

Bonnie, the name of the first storm of the hurricane season, is already causing heavy rains in Venezuela and northern Colombia.

According to forecasts from the

in Florida, the storm is expected on the Caribbean coasts, particularly in Nicaragua and Costa Rica, where schools have been closed.

Bonnie is expected to turn into a hurricane once it lands over the Pacific.

Honduras and Panama could also be affected.

United States: legal battle after the cancellation of the constitutional right to abortion

Abortion in the United States: a Louisiana judge temporarily blocks the ban on abortions