In the spotlight: “the breathtaking” Cassidy Hutchinson

Americas press review In the spotlight: “the breathtaking” Cassidy Hutchinson Cassidy Hutchinson, former assistant to Trump's White House Chief of Staff Mark Meadows, testifies June 28, 2022 as former President Donald Trump reacted in his vehicle after being told he could not surrender at the Capitol on January 6, 2021. © AP/Jacquelyn Martin Text by: Marie Normand Follow 4 mins Advertising R 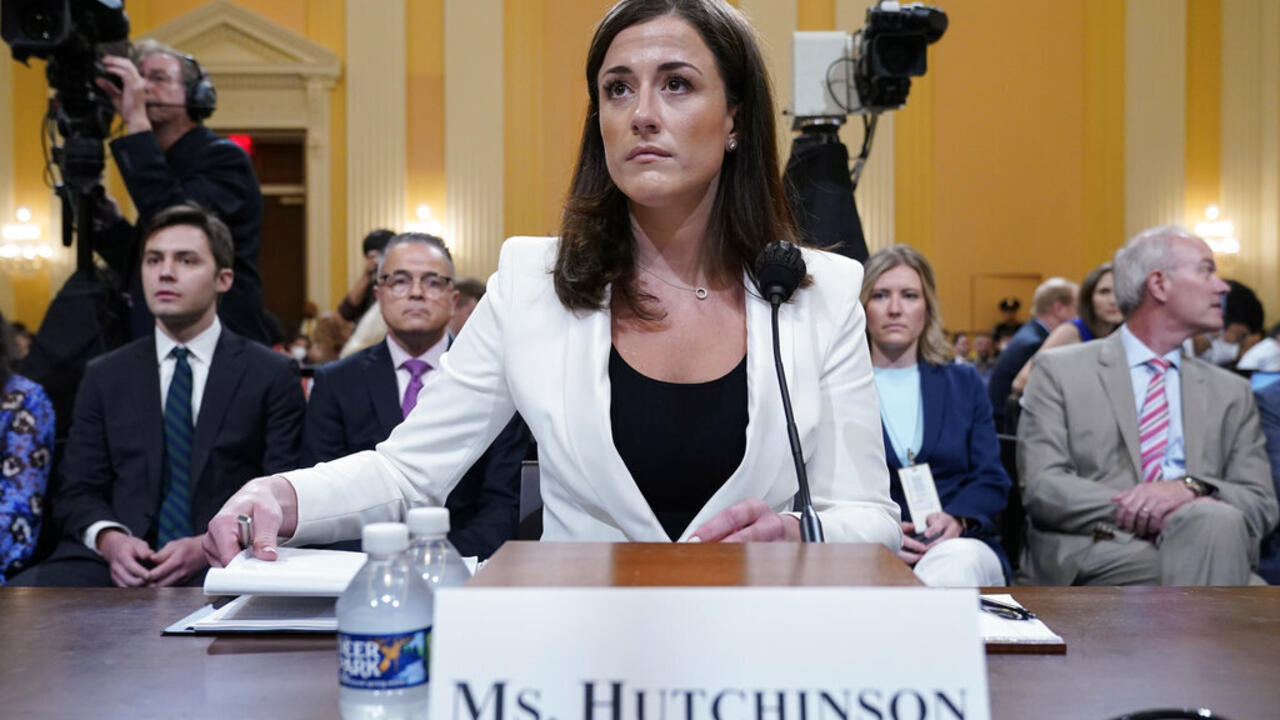 In the spotlight: “the breathtaking” Cassidy Hutchinson

Cassidy Hutchinson, former assistant to Trump's White House Chief of Staff Mark Meadows, testifies June 28, 2022 as former President Donald Trump reacted in his vehicle after being told he could not surrender at the Capitol on January 6, 2021. © AP/Jacquelyn Martin

Cassidy Hutchinson made the front page of most American daily newspapers this Wednesday.

She appears, white jacket over a black top, her head held high facing a pack of journalists, on the front page of the

rising student on a summer internship at the White House

, in Canada, even wonders if “

she is the one who will finally make Donald Trump dive

For two hours that the

", and live on television, Cassidy Hutchinson "

” is also the term used by the editorialists of the

on Wednesday, for whom the testimony of the former assistant “

will go down in history as one of the most damning testimonies ever heard on an American leader.

, during which Cassidy Hutchinson “

What will be the impact on the midterm elections?

The commission is steeped in partisanship

He believes that this information "

would certainly be relevant

too few Americans are paying attention

He calls for a broad, bipartisan coalition whose main objective would be to “

Americans need to get out of their complacency.

The stakes are higher – and the time shorter – than they realize

The motion against the head of state won only 80 votes out of the 92 needed to dismiss him.

Guillermo Lasso remains at the head of the executive

This is the conclusion of three days of debate in the Assembly where the president was accused of being responsible for the strike called by the Confederation of Indigenous Nationalities of Ecuador (Conaie).

A group with which Guillermo Lasso has suspended negotiations.

The Ecuadorian president said he could not dialogue with “

those who try to take peace hostage

He denounces the attack on a fuel convoy in the Amazon, attributed to protesters, as well as the death of a soldier and the interception of another convoy which was bringing oxygen to hospitals.

All these acts are attributed to the protesters.

in its editorial of the day.

Since when is terrorism a valid argument?

which also accuses supporters of former President Correa of ​​adding fuel to the fire.

Treasures at the bottom of dry Lake Mead

Back to the United States: in the American West, the level of Lake Mead continues to drop dangerously.

The largest reservoir in the country provides electricity to 350,000 homes and water to some 25 million people.

Still, its level dropped to about a quarter of its original size.

And when the water drops, we sometimes make strange discoveries!

At the bottom of Lake Mead, we have already found "

It is these wrecks that make Sunday fishermen dream, suggests the newspaper.

But be careful, impossible to embark on a treasure hunt with metal detectors or large magnets, because Lake Mead is on federal land.

The drying up of this reservoir is a real problem for the region.

It has already caused the Hoover Dam to reduce electricity production, "

That could mean less water for agriculture in California and Arizona, two states that produce about a quarter of the nation's fruits and vegetables ," the