7.9 billion dirhams, the volume of activity of 43 “cooperatives” in the country

The Minister of Economy, Abdullah bin Touq Al Marri, confirmed that the UAE economy has succeeded in achieving great leaps, represented in the doubling of the gross domestic product during the past 50 years, to 25 times, which contributed to the country's ranking eighth in the world in terms of per capita income. 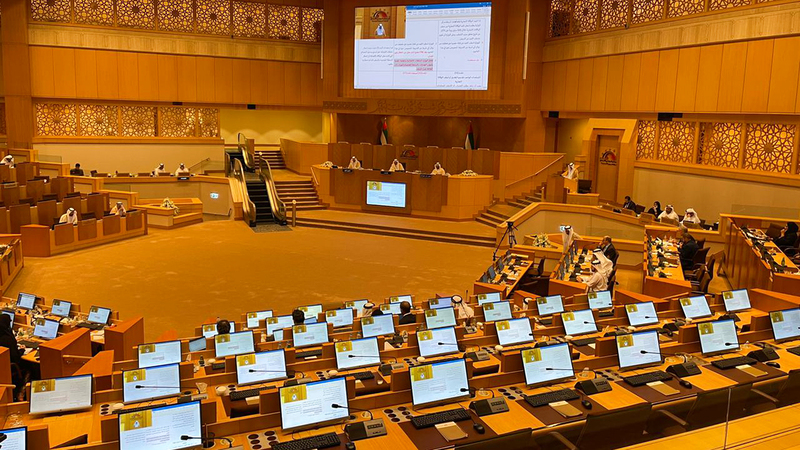 7.9 billion dirhams, the volume of activity of 43 “cooperatives” in the country

The Minister of Economy, Abdullah bin Touq Al Marri, affirmed that the UAE economy has succeeded in achieving great leaps, represented in the doubling of the gross domestic product during the past 50 years, to 25 times, which contributed to the country ranking eighth in the world in terms of per capita gross domestic income. , at $66,000 per year, according to 2020 purchasing power.

The minister also confirmed, during the closing session of the third ordinary session of the 17th legislative term of the Federal National Council, which was held yesterday, that the number of "cooperatives" in the country has reached 43 cooperatives, with an activity volume of 7.9 billion dirhams, indicating that their capital is 3.1 billion. dirhams, contributed by about 100,000 shareholders.

During the session, which witnessed the approval of three federal laws regarding “cooperatives”, the amendment of the provisions of the Federal Law on Medical Products, the Pharmacy Profession and Pharmaceutical Facilities, and the “Regulation of Commercial Agencies”, the minister indicated that the law regulating commercial agencies currently in force in The state, includes many problems, most notably, its inclusion of excessive and unjustified protection for the agent that caused the reluctance of new companies and suppliers to sign exclusive commercial agency contracts, and harm the interest of the citizen commercial agent if he wanted to terminate the commercial agency contract before its term, which may expose him to a claim for compensation from the client .

According to the draft law, the provisions of the termination of the commercial agency that have contracts in force at the time of the law’s issuance will not apply until two years after the date of its entry into force. After 10 years from the date of entry into force of the law, as a period of time to regularize their status.

The session witnessed a parliamentary question being directed by a parliament member, Ahmed Abdullah Al-Shehhi, to the Minister of Health and Community Protection and Minister of State for Federal National Council Affairs, about “utilizing the services of the medical staff,” to which he responded by saying: “The health authorities in the country worked during the period between 2019 and 2022.” 82% of doctors and medical professionals who are over the age of 60 years renew contracts, of which citizens constitute 87.5%.

He added: “We are committed to the law on government human resources, and therefore our situation is different from the private sector, which is linked to contracts that differ in terms of age, as we follow the government human resources system, but with that, what has been renewed from the technical cadres reached approximately 75%, And in nursing competencies to about 77%, and we hope to preserve our competencies of medical staff and not graduate, but we also want to activate the private sector, to attract new young competencies and to keep the turnover rate.”

The minister pointed out that continuity in work is required, but of course, these competencies with the passage of time and old age, their capabilities begin to decline, but the renewal of their contracts is available and subject to technical management to see what is best for the system.

The Council agreed to amend the provisions of the Federal Law on Medical Products, the Pharmacy Profession, and Pharmaceutical Facilities, where the government proposed the draft law in order to keep pace with developments in the state in the field of investment and to allow 100% foreign investor ownership of companies, and oblige their owners to appoint citizens.

It also approved a federal draft law on cooperatives, which introduced a number of articles, most notably “that the founders and shareholders of a typical consumer cooperative should be citizens of the state,” and “granting cooperatives the full authority to use financial tools or financing shares in accordance with their statutes and after the approval of the General Assembly by a decision Special".

The minister revealed that the ministry was keen to include in the federal draft law on cooperatives articles and texts aimed at increasing the cooperative sector’s contribution to the country’s GDP over the next 10 years, from 0.5% at the end of last year to more than 5% by the end of 2031, pointing out that The sector has provided job opportunities for about 13,000 people, 6% of whom are citizens.

The Council approved a draft federal law regarding the regulation of commercial agencies, which included 27 articles that achieve three main objectives, including “encouraging local investment and attracting foreign investment, enhancing transparency, and balancing the relationship between the agent and the principal.”

The Minister of Economy, Abdullah bin Touq Al Marri, affirmed that the UAE economy has succeeded, thanks to the system of flexible and forward-looking laws and legislations for the future, in achieving great leaps represented in doubling the gross domestic product during the past 50 years to 25 times, which contributed to the country ranking eighth globally. Where the per capita gross domestic income, at 66,000 dollars per year, according to purchasing power for the year 2020.

The Minister reviewed the historical stages that commercial agencies have gone through, starting with the issuance of the Federal Law on Regulating Commercial Agencies, in 1981, and then the issuance of the Council of Ministers’ decision in 2005, to liberate 15 consumer goods, followed by the amendment of the law in 2006, and its amendment Again in 2010, and Cabinet decisions were issued to liberate 12 commodities, and then amend the law in 2020, with the exception of public shareholding companies from the nationality requirement for owners if they own commercial agencies, ending with a draft amendment to the Cabinet’s decision to form the Commercial Agencies Committee headed by A judge and four specialists, which was issued in 2020.

The minister stated that the local economy has become one of the strongest economies in the world, and is supported by a strong infrastructure represented in flexible and forward-looking legislation, so that the economic environment and companies in the country have become a model that everyone who lives in the Emirates at all levels can be proud of.

He said that «some articles of the law are considered in violation of the obligations of the United Arab Emirates in the agreements of the World Trade Organization, and more precisely with regard to preventing the entry of goods during commercial disputes, which led to the interruption of some goods from local markets and affected the consumer and the market from this interruption, and affected the competitiveness of The country is ranked in many regional and global indicators.

Conditions for a doctor to work after the age of 60

The Emirates Foundation for Health Services has set a number of main conditions for renewing contracts for doctors and competencies over the age of 60, in light of what is permitted, so that the extension is not carried out unless there is a need for a doctor.

The Director General of the Foundation, Dr. Youssef Muhammad Al-Sarkal, stated that the conditions include the scarcity of the doctor’s specialization in the labor market, and the absence of a suitable alternative in the event of his retirement, in addition to productivity and performance, as it takes into account the evaluation of the doctor’s performance during his previous work period, as well as the patient’s safety and security. It is a major goal in any medical facility. The doctor is not dispensed with after he reaches the age of 60, and there are patients in the facility who need his specialization.

He pointed out that the conditions also include that the doctor must be in good health.

The Minister of Economy, Abdullah bin Touq Al-Marri, confirmed that the draft federal law on the regulation of commercial agencies included eight main axes, including “the adoption of the principle of the authority of will, respect for contractual terms in line with international best practices, and the development of provisions for the devolution and transfer of assets of commercial agencies with the addition of a commission of 10 % In order to complete and achieve the smooth flow of exit, and add guarantees to compensate the commercial agent fairly in the event of his damage, even if the termination is one of the reasons for the termination of the commercial agency specified in the law, and regulate the entry of goods and services during the period of conflict between the client and the agent, and the introduction of the principle of the temporary agent to protect the interests of the consumer to avoid interruption of goods and services in the market, and in order to achieve the country’s trade policies and its obligations to ensure the flow of goods in accordance with the agreements of the World Trade Organization.”The axes also included adding the responsibility of the temporary agent in solidarity with the client for what the courts ruled in terms of compensation for the old agent, the introduction of an agreed recourse to arbitration to settle the dispute, the introduction of an administrative sanctions system instead of penal penalties, and agreement on the duration of the transitional period to settle their status to ensure that their agents are not subjected to immediate termination of agencies and approval The right to claim compensation when the agent suffers damage due to the termination of the commercial agency contract, which preserves the interests of national companies that have made large investments.

The council approves draft laws on “medical products and the pharmacy profession”, “cooperatives” and “commercial agencies”.

Allowing foreign investors to own 100% of pharmaceutical facilities, and obligating their owners to “appoint citizens”

Years as a deadline for the termination of commercial agency contracts with investments of 100 million dirhams, which were contracted with the principal 10 years ago.