After two weeks of demonstrations against the high cost of living, representatives of the indigenous demonstrators held a first direct dialogue with the government on Monday, without tangible results until… 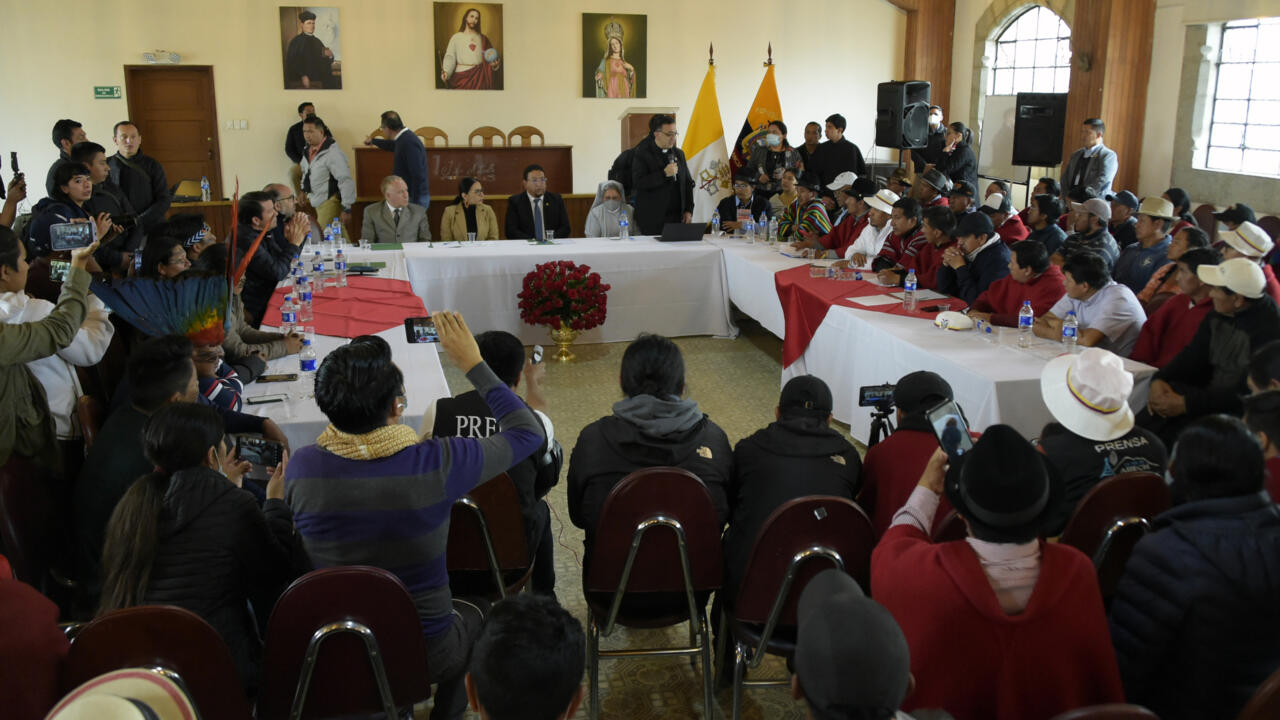 The leaders of the powerful Confederation of Indigenous Nationalities (Conaie), spearheading the protests, including its leader Leonidas Iza, met for nearly five hours with an official delegation led by Minister of Government Affairs Francisco Jimenez, AFP noted. .

The meeting takes place in an annex of the Catholic basilica in the historic center of the capital, in the presence of representatives of the Church and of the Congress, and focuses on ten points of discussion.

Briefly interrupted in the early evening, it continued at 9:00 p.m. local time.

At his opening, Mr. Iza called on the government to carry out "a policy that can benefit the poor more".

"We have no problem spending as many days as we want, with our comrades, marching peacefully in the city of Quito and surely in the other cities of Ecuador", warned once again the head of Conaie during the debates.

As a sign of willingness to dialogue, the government reduced the price of gasoline and diesel on Sunday by 10 cents, but the natives consider this first reduction "insufficient" and are asking for a reduction of 40 cents.

With this latest drop, the subsidies reach 13.2% of the revenue of the general state budget for nearly 3.4 billion dollars, the equivalent of the education or health budget, underlined Mr. Jimenez, calling for the "search for consensus, (...) without condemning the State to inefficiency or bankruptcy".

"We have answered, not 100% of what you asked for, but (...) we also demand answers from you," insisted the minister for his interlocutors.

During a first meeting on Saturday, already with the Minister of Government Affairs, Conaie had only undertaken to consult its base to appoint a representative commission.

Ecuador President Guillermo Lasso, who tested positive for Covid-19 last week, did not attend either meeting.

The price of fuel is the main demand of the demonstrators, with a one-year moratorium on the payment of bank debts of peasants.

As a sign of openness, the Ecuadorian president on Saturday ended the state of emergency declared a week earlier in six of the 24 provinces of the country most affected by the demonstrations, a condition of the protesters to start the talks.

The president of Conaie Leonidas Iza (C) dialogues with the representative of the government, in Quito, on June 27, 2022 Rodrigo BUENDIA AFP

He renewed his call for "dialogue" on Sunday evening, warning however "those who seek chaos, violence and terrorism (that they) will find the full force of the law".

He accused the demonstrators on Friday of wanting to "perpetrate a coup".

Quito, where some 10,000 indigenous demonstrators are gathered according to the police out of some 14,000 estimated in the country, is at the heart of the movement which affects 19 of the 24 provinces of the country.

Five demonstrators died in violence with the police in the country, according to an NGO.

More than 500 people, civilians or members of the security forces, were injured.

On Sunday, a new, peaceful demonstration took place in the historic center of the city.

Women in the lead, several thousand natives, some carrying spears and shields, marched a stone's throw from the presidency, heavily protected by the police.

Indigenous demonstrators in front of the basilica where negotiations are taking place, in Quito, on June 27, 2022 Rodrigo BUENDIA AFP

“We want this racist government gone, an ungrateful government that has insulted men, women and children by raising the price of basic necessities,” accused one of the protesters, Emma Pirucha, from the Shuar community, the face painted green and black.

The crisis is hitting the country's economy already affected by the pandemic and closely dependent on oil revenues, the main export product.

The roadblocks that paralyze trade and the forced shutdown of more than 1,000 oil wells, particularly in the Amazon provinces, could, according to the government, lead to a total shutdown of black gold production in the coming hours.

"Oil production is at a critical level" and could cease if the situation continues, warned the Ministry of Energy on Sunday.

Production, reduced according to him to 50% of normal, was around 520,000 barrels a day before the protests.

Under pressure from protesters on one side, President Lasso, a former banker in power since May 2021, is also threatened with impeachment by Parliament.

The parliamentary opposition – a majority but divided – blames him for the “serious political crisis” that is shaking the country.

Late Sunday evening, the parliamentarians again suspended, after seven hours of discussions by teleconference, their debate opened on Saturday on a possible dismissal.

A protester sharpens his wooden spear during negotiations between indigenous leaders and the government, in Quito, on June 27, 2022 MARTIN BERNETTI AFP

After the debates, the deputies will have 72 hours to vote.

A majority of 92 votes out of 137 is required for the impeachment procedure to pass.

Mobilizations of the indigenous movement caused the fall of three presidents between 1997 and 2005.